I was on a Press Trip in Gulf Shores Alabama just after a conference in Alabama and had a great time. You go for the beach and the things to do, but while you are there, the food scene deserves some thoughtful and very careful research. Here are some places I enjoyed: 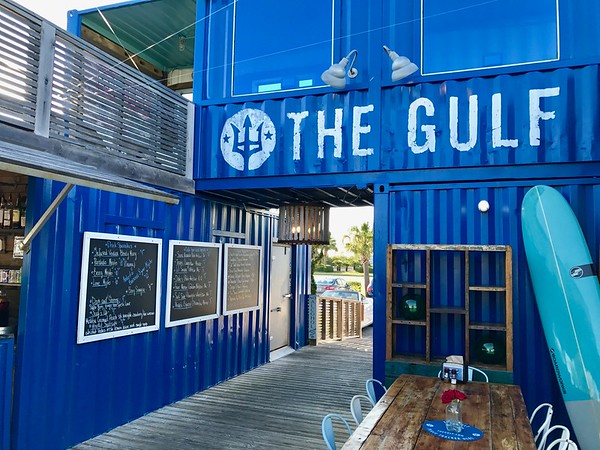 When you come on vacation to a beach community, just about the perfect spot to eat is on a beach. My new favorite restaurant in the Gulf Shores area is simply called The Gulf. The Gulf is located right by the Perdido Pass Bridge in Orange Beach. The Gulf is constructed of old shipping containers so even the architecture of the restaurant is noteworthy.

Add in a sunset and a flyover by the Blue Angels and you get some sense of the experience eating there. As the Blue Angels flew over, Kay Maghan from Gulf Shores & Orange Beach Tourism just kept hitting me on the back saying something like “ooo, ooo, ooo”, but one of the employees just look at her watch and said, “oh, is it 7 o’clock already”. The Blue Angels are based nearby in Pensacola, Florida, and often make an appearance Sunday evenings. 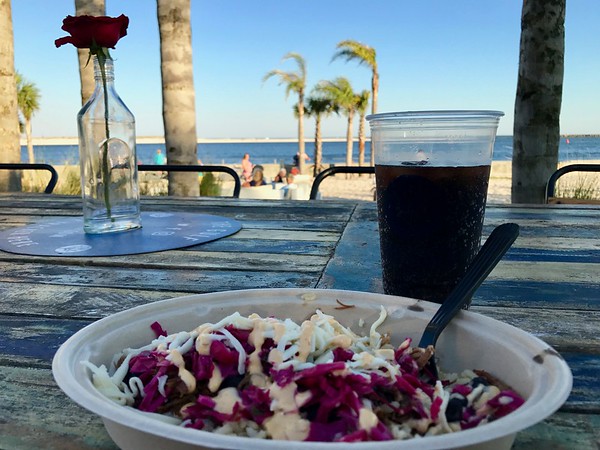 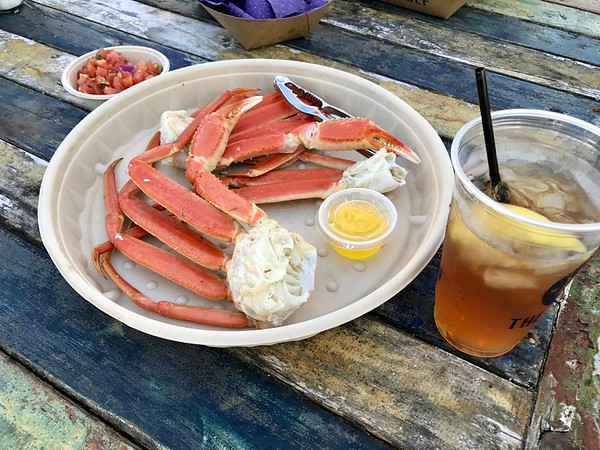 The restaurant fare is burgers, sandwiches, seafood like crab legs, tacos, and taco bowls, so simple but great. You can eat at the bar, on the deck or the lawn which slopes down to the beach. This is a place to go with friends and linger over dinner.

LuLu’s is a popular restaurant located adjacent to the Gulf Intracoastal Waterway so, in addition to good food and a great playground for kids, this restaurant features the occasional barge going by. The restaurant’s founder is Lucy Buffet, the sister of Jimmy Buffet. When she got tired of Hollywood she returned to the South and created a series of restaurants “where life is good and lunch lasts forever.”

In the summer they serve 4,000 people a day so there can certainly be a wait. They don’t take reservations but they have added a feature on their website to join the waiting list. 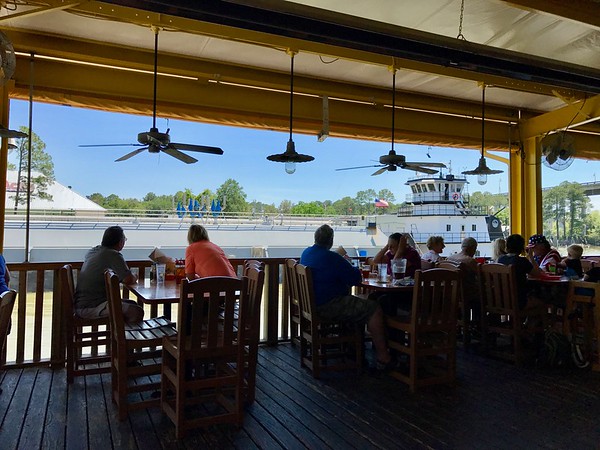 With a three-story rope climbing apparatus, face-painting, hair-wraps, volleyball nets, live music, a retail store, a sandy beach area (equipped with pails, shovels, and other beach toys), and an arcade, LuLu’s is as much a destination as a dinner.

They are known for their gumbo, but I had the jerk chicken sandwich instead. I am also a fan of their L.A. (Lower Alabama) caviar made from black-eyed peas. Save some room for the Key Lime Pie or the Krispy Kreme Bread Pudding for dessert. 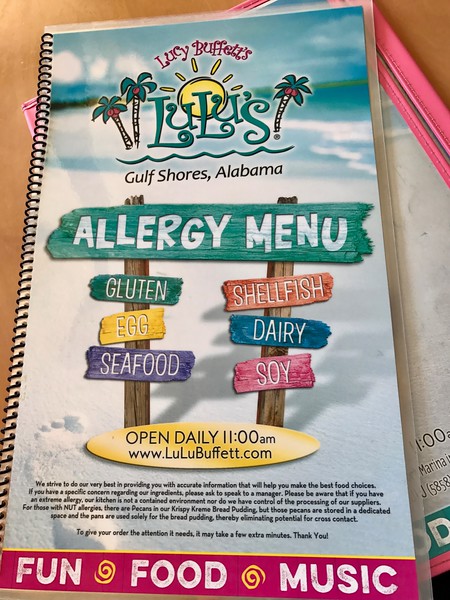 LuLu’s has an extensive specialty menu for people with allergies. Whether you are allergic to gluten, egg, seafood, shellfish, dairy or soy, they have something for you.

In my book, any day is a good day for BBQ and if you are looking for some good BBQ, I recommend the fare at Hog Wild Beach & BBQ. Hog Wild has been voted one of the top 10 BBQ joints in Alabama and one of the top 5 places for french fries (their wild fries). I could tell you about their slow-cooked meat and homemade sauces, but if I didn’t already have your interest at BBQ, then I pity your shallow vegan existence.

Bill’s by the Beach – Gulf Shores

Bill’s isn’t on the beach but it is by the beach. The restaurant prides itself on fresh seafood, but there was also plenty to like for a non-seafood eater like me. We tried the Bacon & Crab Cheesecake, the Comeback Shrimp and the Fried Mac & Cheese for an appetizer. The APB (Apple, Pecan & Blue cheese) salad was really good. 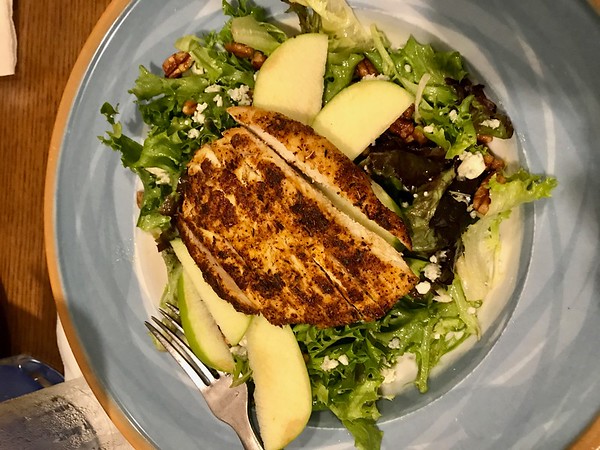 Fisher’s is not one restaurant but two. When you want something more casual you can eat downstairs in the dockside restaurant, but when you are ready for a white tablecloth experience, head upstairs at Fisher’s. The two restaurants have a different menu as well as ambiance but both are recommended by Southern Living in their list of the 10 best restaurants in the South (2017).

We ate upstairs where much of the group tried and enjoyed the farm-raised oysters as an appetizer. The menu is mainly surf and turf, with a number of fresh seafood choices. I tried the 10 oz. Raines Wagyu New York strip with a wild mushroom compound butter and my mouth is watering even now writing about it. I opted for a pilaf instead of the usual potato and turnip mash and thought that made a good complement to the beef. I was tempted by the Rabbit pasta which also got great reviews. 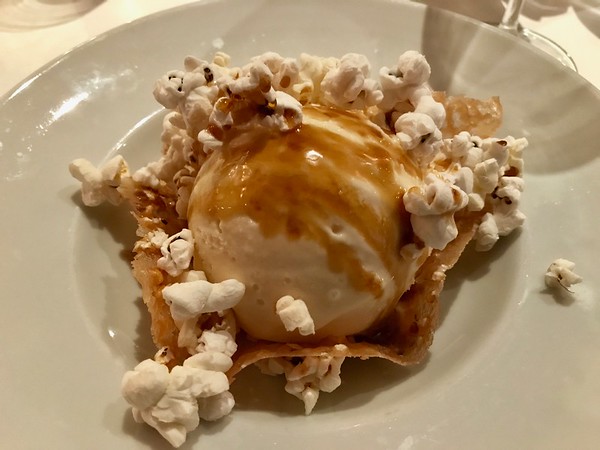 There are a number of different dessert options daily but let me just say, “Steen’s cane syrup caramel popcorn dome”. You can thank me later.

My favorite breakfast spot was Brick & Spoon because the food is just marvelous. You will have the difficult choice of choosing between such goodies as Banana Foster’s french toast and Breakfast Tacos in Fried Wonton Shells with Chorizo Scrambled Eggs and Mango Salsa. Travel+Leisure named Brick & Spoon one of the 10 best breakfast spots in the USA. I will second that.

If you are a fan of a Bloody Mary for breakfast then you have come to the right place. They have an entire menu for the concoction and keep tabs on how many they serve. 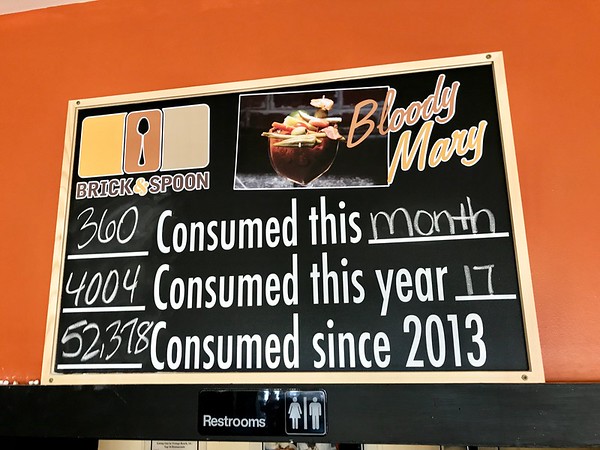 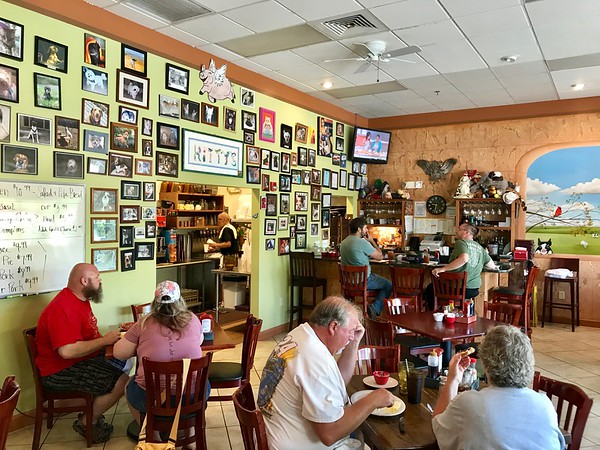 Kitty’s serves breakfast all day in addition to a lunch menu. They have the usual breakfast favorites as well as a large selection of Eggs Benedict specialties with everything from crab cakes to fried green tomatoes. This is the place to go when you are missing your local favorite breakfast joint or just have a craving for southern fare like country fried steak, biscuits and gravy, or fried green tomatoes. 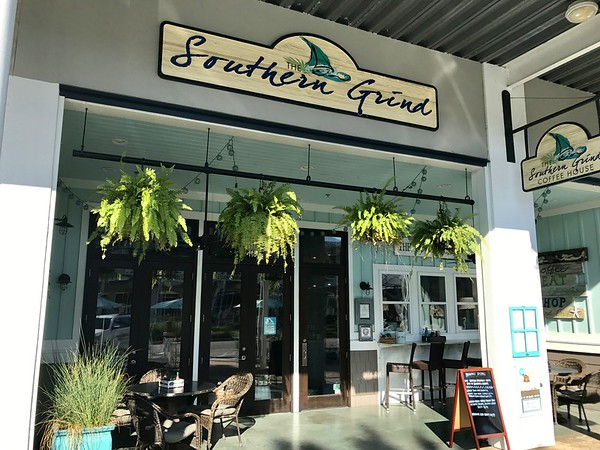 Southern Grind is a great place to go even if you are not that hungry, just to look at the artwork which is on sale, or of course for a cup of coffee. This is a pleasant place to start any day. I had the Breakfast Biscuit because I was trying to be good. If anyone claims that they saw me finishing up someone else’s Belgian Waffle, I would point out that there is no photographic evidence to support that claim. 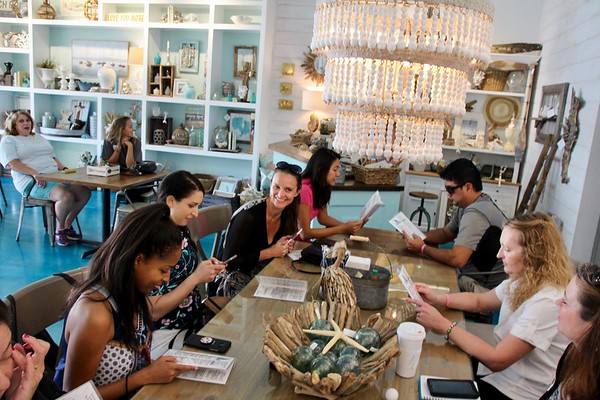 What did I miss? What is your favorite place to eat in the Gulf Shores area? 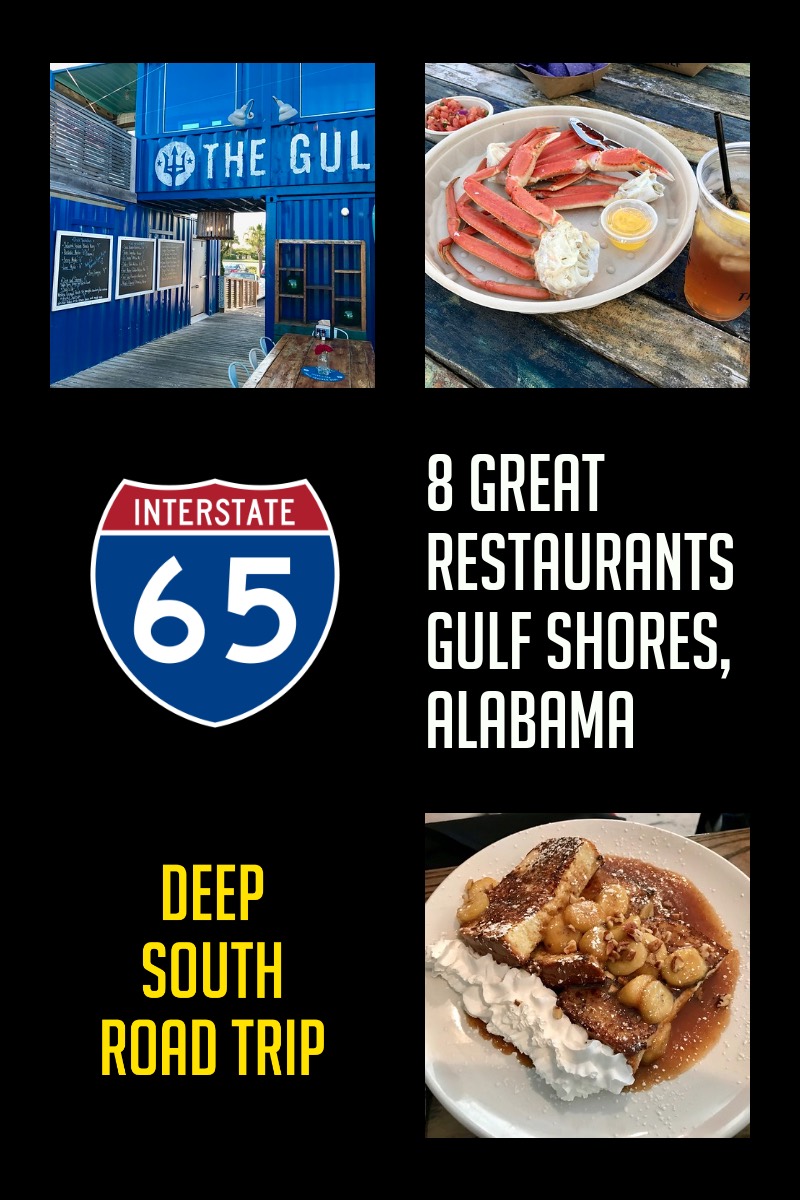