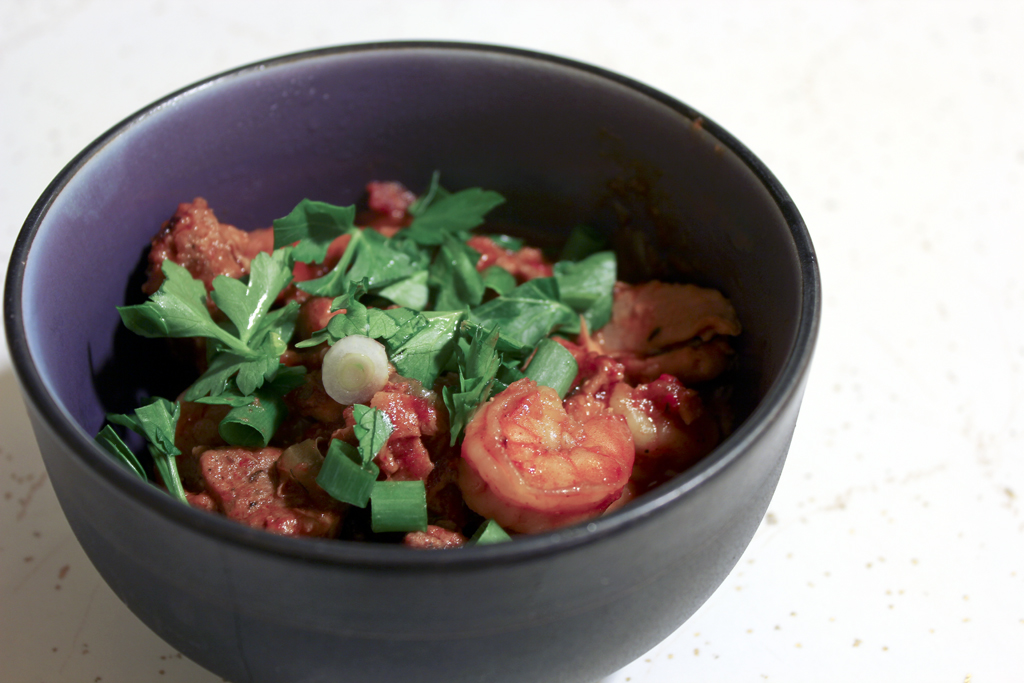 Oh man, this was good. Really, really good. And to top it off, it’s a really good weeknight meal. It’s one of my most favorite kind of recipe – one of those that does not require any prep work because each ingredient’s cooking time allows to you prep the next ingredient. Oh, and it’s a one pot meal. Win! 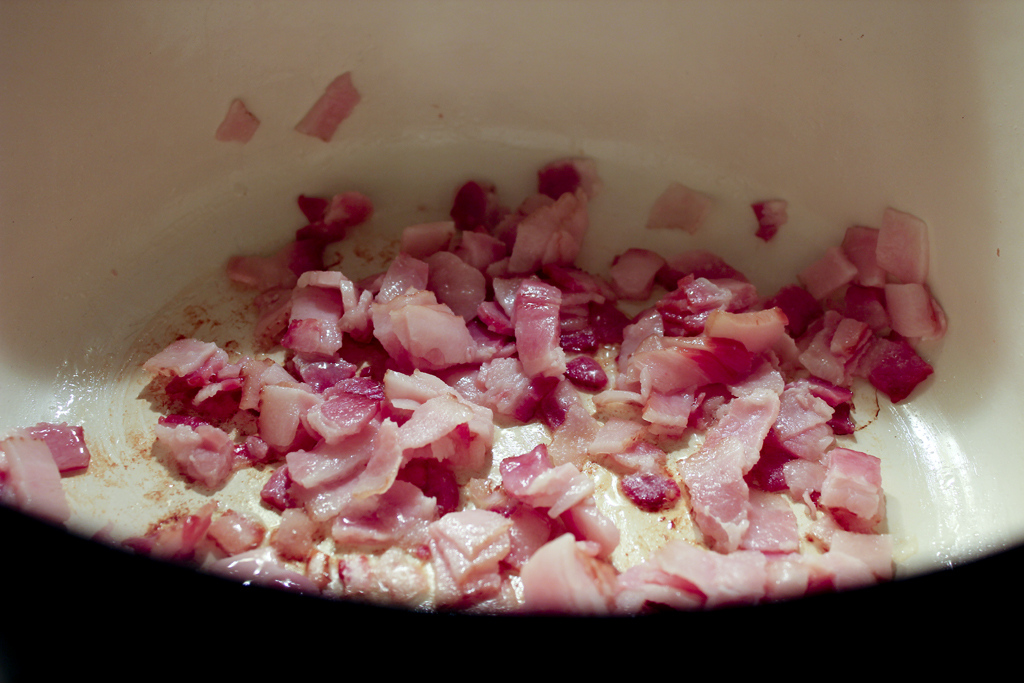 This recipe is essentially jambalaya, but since there’s no rice in it, I felt I couldn’t call it such. I might get nasty comments about my blasphemy. There is a type of jambalaya where the rice is prepared separately and added upon serving, so I supposed mine is more like that, but still, I’ll just call it stew. It’s got the trinity of onions, peppers, and celery, which is like the mirepoix of Cajun cuisine, and there’s chicken, kielbasa, andouille, bacon, and shrimp. It is as good, and better, as it sounds. 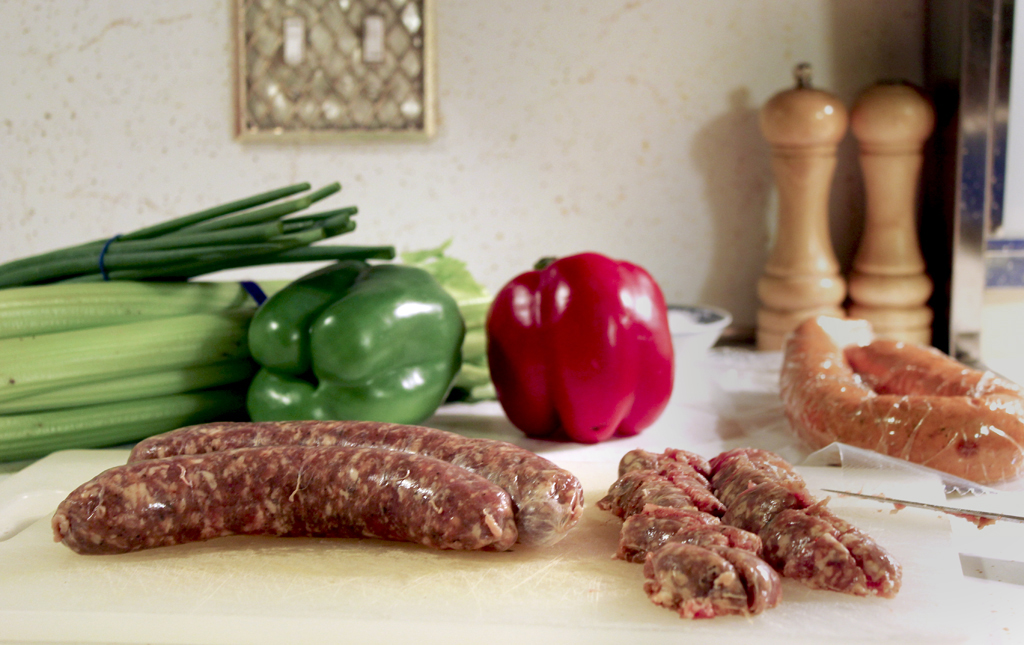 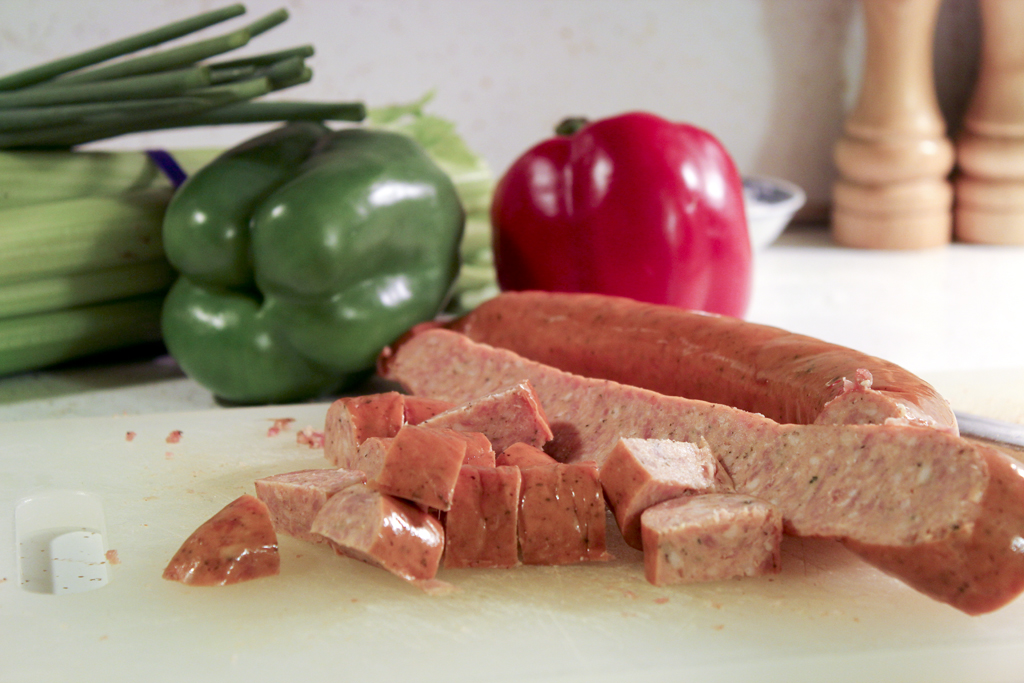 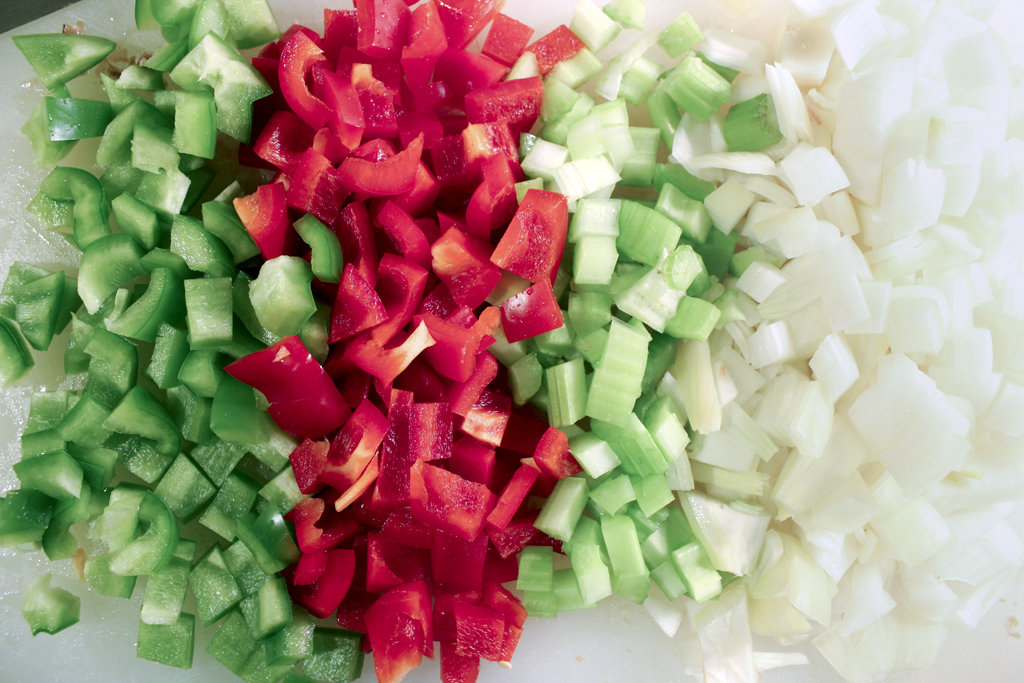 You’re going to need a big heavy stock pot or Dutch oven for this recipe. Gather all of your ingredients and you’re off! You’ll have ample time to prep the next set of ingredients that gets added to the pot while the first is cooking. I was even able to do this, give or take a few minutes each time, while taking pictures. That stinking camera is sometimes the death of me during cooking. 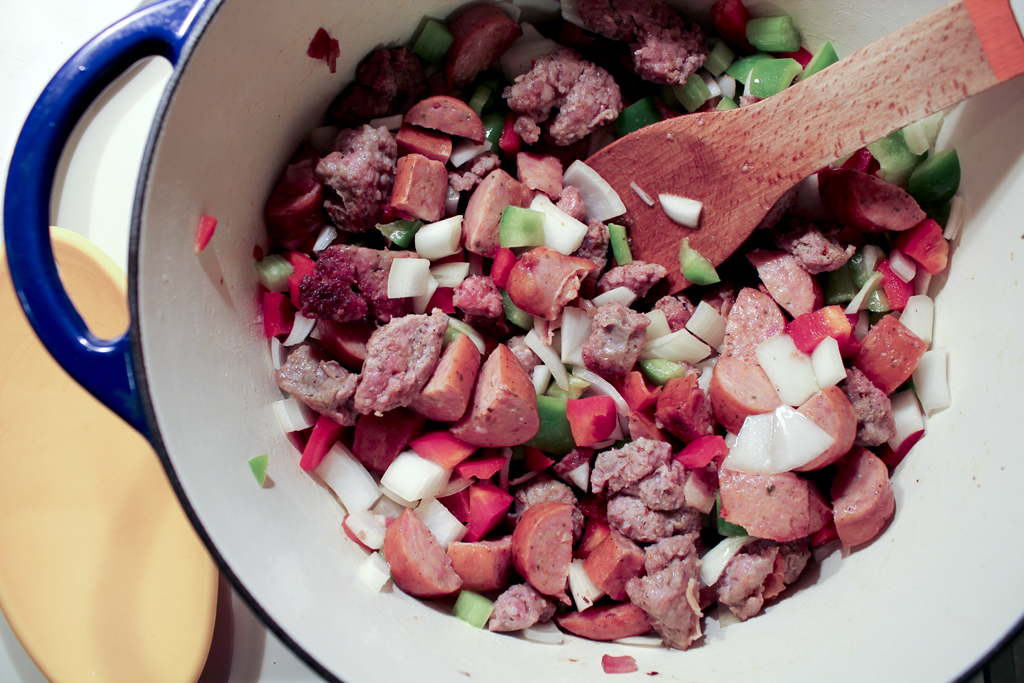 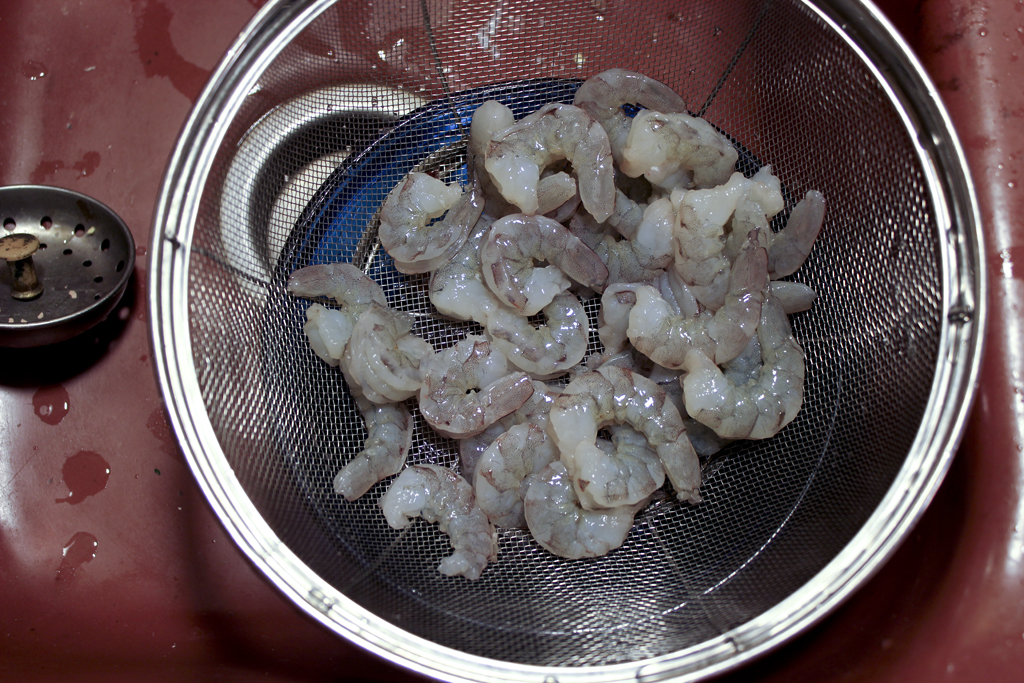 There are a few substitutions that you can play around with in this recipe. The first is the kielbasa. The recipe I used called for linguiça. If you can’t find this, you can use kielbasa, like I did, or chorizo. The original recipe also called for tasso, or if you can’t find that, Black Forest ham. I didn’t use either and, while I haven’t tried it with, I didn’t think the recipe suffered one bit. If you want to use more vegetables, that would be fine too. I actually doubled the amount in the original recipe and I’m happy I did. They add thickness and a nice texture contrast. The shrimp is up to you. I think it’s beyond wonderful, and probably my favorite part in the stew, but I know it can be expensive. If you can’t find shrimp on sale, I suppose I can go along with omitting it. But I must insist – stock up on frozen shrimp whenever it’s on sale. It’s a great way to get some seafood in your diet and it defrosts quickly. 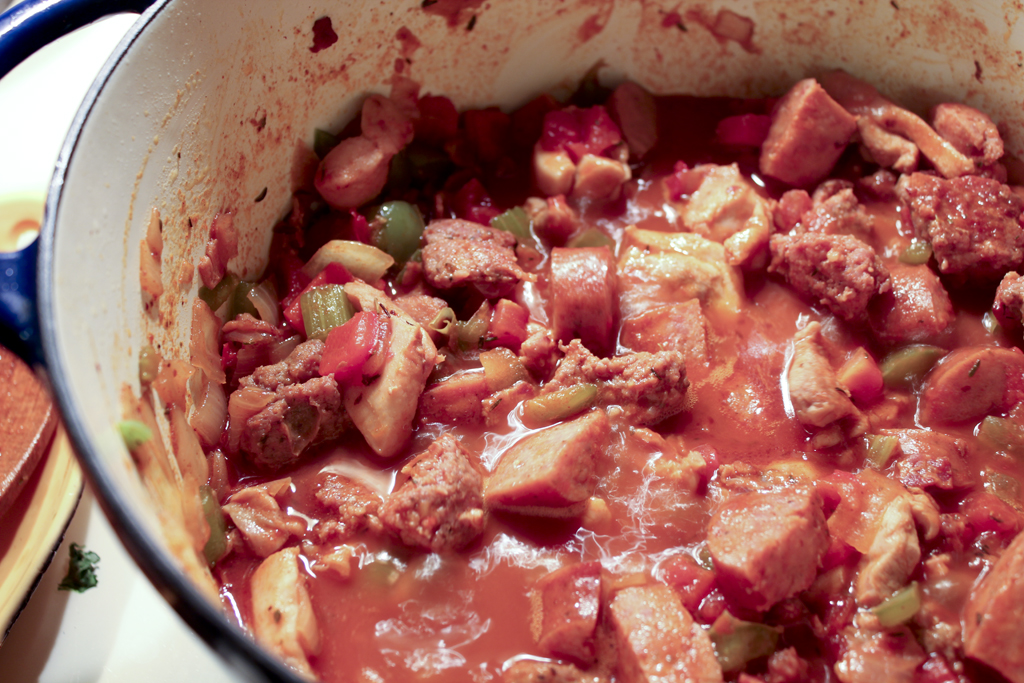 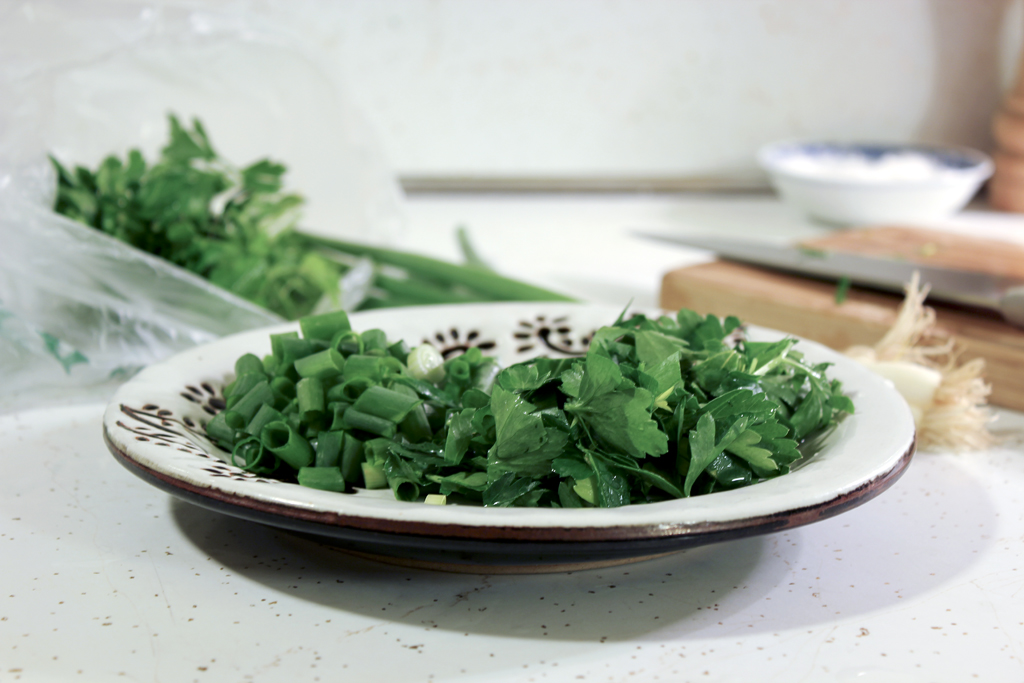 1. Heat a large, heavy pot on medium heat, add bacon and cook for about 8 to 10 minutes, until brown and beginning to crisp.

2. Add the sausages, and optional ham. Sauté the meats until getting brown, about 10 minutes.

4. Add chicken. Cook until chicken is mostly white on the outsides, about 5 to 6 minutes.

5. Mix in spices and canned tomatoes. Lower heat to medium low, cover, and cook for about 20 minutes, until chicken and andouille are fully cooked. This should be ample time.

6. Uncover the pot and add the shrimp. Cover and cook for about 12 minutes more. If the stew seems dry, you can add a little beef or chicken broth. Adjust any spices you’d like. I didn’t need a bit of salt in mine and I did up the cayenne a tid.

Serve the stew with the scallions and parsley on top. Enjoy!!