Beef Chuck at a Glance

Ryan Adams has done an excellent series on different cuts of beef and has given permission to re-post his content here, with minor modifications for the Professional Chef audience.

There’s something comforting about those huge chunks of chuck roast. It’s a common cut, and yet some of my fondest memories are tied to it, as my grandmother made one killer pot roast. Maybe it’s a primal Pavlovian response, causing a rush of endorphins to my brain upon seeing all that muscle and fat. Either way, there is no doubt that if you want drool inducing roasts, you’ve got to head straight to the chuck. The chuck is essentially a whole cow shoulder, also known as a clod, and when removed from the forequarter is called a cross-cut chuck. It weighs about 100 pounds, and makes up roughly 23% of the carcass. The chuck primal itself is bigger than its brethren and harbors the most seam fat, too. With so much meat coming from one area, it means that it’s the most plentiful cut of beef available, and therefore the most economical cut you can find.

When the brisket is removed (don’t worry, we’ll be covering that barbecue darling soon), the cross-cut chuck becomes an arm chuck. Remove the foreshank, and we have a square-cut chuck which is composed of four large muscles and a bunch of little ones. The largest of the big muscles is the eye of chuck, and is often sold as chuck eye roast. The smallest of the large crew is actually something I’ve already covered, the shoulder tender. Moving on, the meat found under the shoulder blade is sometimes called under-blade pot roast or if cut into steaks, under-blade steaks. The meat above the blade, the aptly named top blade, is a small muscle that is shaped much like a triangle. You probably know it better by its marketing name, the flatiron steak.

The muscles that make up the square cut chuck are flavorful thanks to the amount of work they’ve done, and juicy due to the fat and connective tissue that is scattered throughout the area. The grain of the muscle is fairly coarse and unpredictable; it may run in different directions within one piece of meat and have varying degrees of tenderness and marbling.

Below are the most common variations of the Chuck Roast along with their IMPS/NAMP number.

This big boy is the whole square-cut of chuck, and it is one seriously massive hunk of beef. Since there is so much of the chuck, butchers are able to dissect it into an almost limitless number of reasonably priced pot roasts and steaks that are popular. The same piece of meat as above, but without all of the bones and cartilage, and with some of the intercostal meat removed. The smaller section of meat is the shoulder, which includes things like the flatiron steak, the shoulder tender, and the shoulder center. Cut from the boneless square-cut chuck, the chuck roll contains the largest of the muscles found under the shoulder blade. The chuck roll can be cut into any size, and might be placed into netting or tied to keep its shape. This cut is very similar to the one above it, but is trimmed of some of the muscles, and some of the extra fat. It can be cut into steaks or into cubes for stew meat. Ladies and gentlemen, I present to you the flatiron steak. An excellent cut of meat, the top blade steak is particularly tender when compared to other cuts from the chuck. One shoulder houses two of them, which are attached by a layer of tough connective tissue. Great PDF’s by the Beef Checkoff 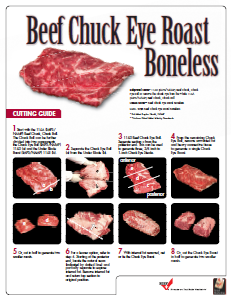 Comments from before Site Migration

Previous ArticleWhat Everyone Ought to Know About Beef Cuts
Next Article What Is A Chuck Roll? And How Is It Cooked?