“If it ain’t broke, don’t fix it,” is quite possibly the mantra of Japanese publisher Koei Tecmo and its development studio Omega Force. The two have released no less than 32 mainline games based around the Warriors format. If you think that’s a large number, I’m not even counting the expansion Xtreme Legends and Empires titles, which also run into double-digits. Finally, after decades of being labelled as stagnant, take-it-easy companies which avoid innovating a main IP, Koei Tecmo and Omega Force took a risk. That risk is Dynasty Warriors 9, and it has not paid off.

Eyebrows were raised among many Warriors fans when it was announced that the game would feature an open world spanning the entirety of Three Kingdoms-era China. In case you haven’t checked, China is a big place, and populating even medium-sized open worlds has been the bane of many developers. Dynasty Warriors 9 looks upon that challenge and laughs, because it is just about the emptiest open world game in existence.

Let’s pull back for a second, though. For the uninitiated, Dynasty Warriors is a series based around single-button (and if you’re feeling risque, double-button) mashing until the hordes of Chinese (or Japanese) peasant-soldiers and officers in front of you are vapourised in a display of flashing lights soundtracked by wailing guitar riffs. The series knows what it is, and until the sixth or seventh installment of the main game, players didn’t mind (for the most part). After a decade of mediocre critical reviews, though, Koei Tecmo tried to change things up. 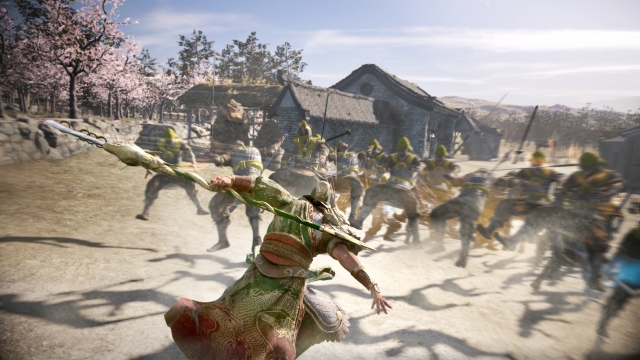 Fans of the series have longed for something to kick the series up the arse, but I don’t think many of them wanted that to be an open world. Dynasty Warriors was always about moving around a fixed stage, with multiple paths, carving through an army of cannon fodder. It was a god complex made manifest and it was glorious. Omega Force, which had essentially been making the same mechanics for years, was suddenly tasked with creating a fully-realised open world map.

The problem with open worlds, and something even greats like Breath of the Wild struggle with, is filling the map with things to do. Omega Force obviously didn’t know what to do, so it looked to others for inspiration. Now players can fish, collect herbs, mine ore, hunt animals and do minor quests for random NPCs to gather XP and level up. The map is covered in a fog of war that must be explored to unlock fast travel points. Alternatively, players can find watchtowers, climb them, and scan the horizon to unlock things. It’s this wholesale embracing of mechanics that annoy and irritate most gamers that starts DW9 off horribly.

Perhaps it would be worth it if the map were packed with interactivity, but it simply isn’t. It’s huge, barren and it takes a good 3-4 minutes of riding a horse to get anywhere of interest. Apart from action points to do with your overall objective, the map is only sparsely populated with soldiers wandering between bases aimlessly. Some of the cities and bases are impressively large and realised versions of their antecedents from previous games, but it’s worthless when they’re empty and soulless. 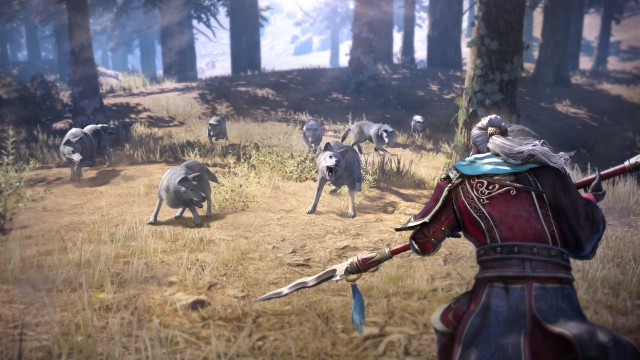 The combat, which was never spectacular, has somehow been dumbed down further. Players are given four main attacks, which correspond to the face buttons on the controller when the trigger is held down. One stuns, one knocks enemies in the air, one slams them into the ground and one is a strange semi-special attack. Gone are the usual combinations of Square-Triangle / X-Y which added variety to your combos. Now there are four basic strikes, and one modifier strike. Stringing these together is like wading through treacle.

Not that it matters, because this game is painfully easy. DW9 has a level system, though it didn’t stop me defeating a level 20 commander at level five. AI officers are downright idiotic in the way they attack, defend and move. Enemy foot soldiers barely attack, and when they do it’s with easily-avoidable moves that make them more irritating than enjoyable to deal with. The one positive is that at least the game, when it actually tries, can throw a huge number of cannon fodder at you. You’ll probably be too busy trying to track them as they pop in and out of view to really care, though.

The straw that broke my back was when I attacked Huo Luo Gate. I could barely watch as Lu Bu – probably the most famous DW character – appeared. Ask any Dynasty Warriors fan and they’ll say being consistently wrecked by the overpowered Lu Bu is one of the formative memories of their childhood. It was a great introduction of difficulty to players who had, up until that point, mown down legions of soldiers. To be hacked to death in just two or three hits gave players an incentive to get better and level up and eventually face Lu Bu in titanic battle later on. In DW9 I strolled up to him and beat him in less time than it took for his initial cutscene to finish. 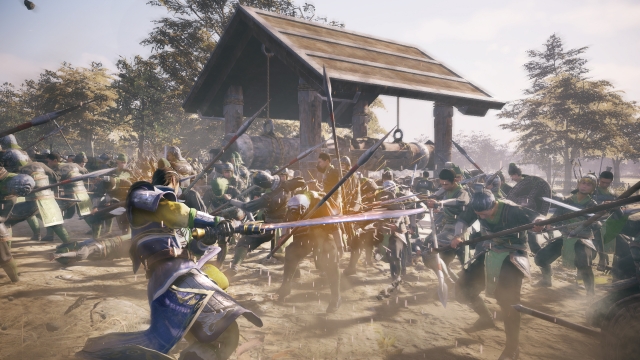 The series has never given too much of a care about historical accuracy. As such, the characters often had outlandish and fun-to-play weapons. Some of the iconic weapons, already decimated in Warriors 6, have been outright removed in DW9 in the name of adding authenticity. This is despite a number of characters still using magic fans that fire laser bolts. Heroes now look and play completely differently to how they have done for the better part of ten years. Koei Tecmo also returned to dubbing its games with English, but decided not to hire its previous voice actors, so all the heroes sound different, and they sound horrible. The voice acting is phoned-in at best and downright awful at worst.

Graphically, Warriors games have never been anything to write home about, but perhaps it was too much to expect the engine to have been pushed anywhere near enough to match the quality needed for an open world title. Textures are bland, lifeless and copy-pasted throughout the game. Characters have been touched-up but the models have lost their iconic look and appeal. Gone too are cinematic cutscenes, replaced by in-engine vignettes that combine the textures, models and voice-acting to create a true horrorshow. I have never skipped so many scenes in my life.

In previous Warriors games, items and weapons are picked up from defeated enemies in a simple but effective way to kit out the player with new gear. Better enemies = better gear dropped. Now players must craft almost every single thing in their kit. Where before there was instant gratification, now there’s endless boring menus and grinding. Even when trying to avoid collecting and fetch-questing, the game holds your hand and makes you go through the god-awful charade. It makes you wonder if Koei Tecmo and Omega Force have ever met their userbase – almost every design decision in this game is the opposite of what any Warriors fan wants. 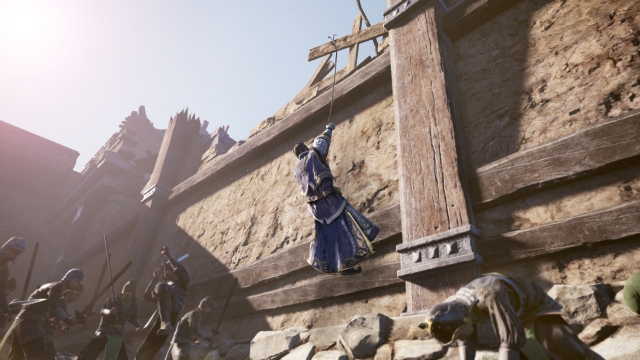 “At least the game isn’t buggy or broken,” I hear you say. Sorry, but I’m about to ruin that hope for you too. Soldiers pop in and out, even when next to your character, and run through mountains, hills and rivers. Artifacts clip in and out of existence. Hunting animals in DW9 honestly made me reconsider my love for the entire franchise, as tigers shook and spun around, sank into the ground or just straight-up vanished into thin air while I shot them with my bow. Omega Force even created its own bugs, by giving the player some form of omnipotent grappling hook that can allow them to wall run up any surface. This completely removes the point of siege set-pieces, as it’s extremely easy to just climb up a wall, jump in and kill the commander. The only tiny sliver of positivity I can find is that at least the PC port of the game comes with an ability to customise a variety of graphical settings. Having played it with the settings as high as possible, I shudder to think what it might look like on the lowest.

Everything about this game seems completely rushed. Dynasty Warriors has never been a series filled with complex narrative, deep mechanics or exemplary graphics, but it had always got by on the good will of a fanbase that just wants to be able to hop into a game and hack away at some mooks. When it takes between 10-15 minutes (and I timed it) to go from getting into a story stage to actually fighting more than a small group of enemies, that itch just isn’t scratched, and all the little niggles that could previously be overlooked rear their ugly heads. To jump onto the open world bandwagon three or four years too late and still deliver such a pile of garbage isn’t just embarrassing, it’s insulting. I honestly cannot believe this game even passed quality control, and it’s a sad indictment of the overly-comfortable, innovation-averse strategy that must be in place at Koei Tecmo.

How to yoni steam at home without equipment

How often should you add water to a steam boiler

Family Cuisine
Family Cuisine - Instructions, how-to, recipes for delicious dishes every day for your loved ones in your family

How to make steam engine in doodle god

Is the instant pot supposed to steam while sealed

Here are the hottest is the instant pot supposed to steam while sealed topics edited and compiled by familycuisine.net

Can you use visa gift cards on steam

Here are the best can you use visa gift cards on steam topics edited and compiled by familycuisine.net

Can you get banned for playing cracked games on steam

How long does beef stew last in fridge