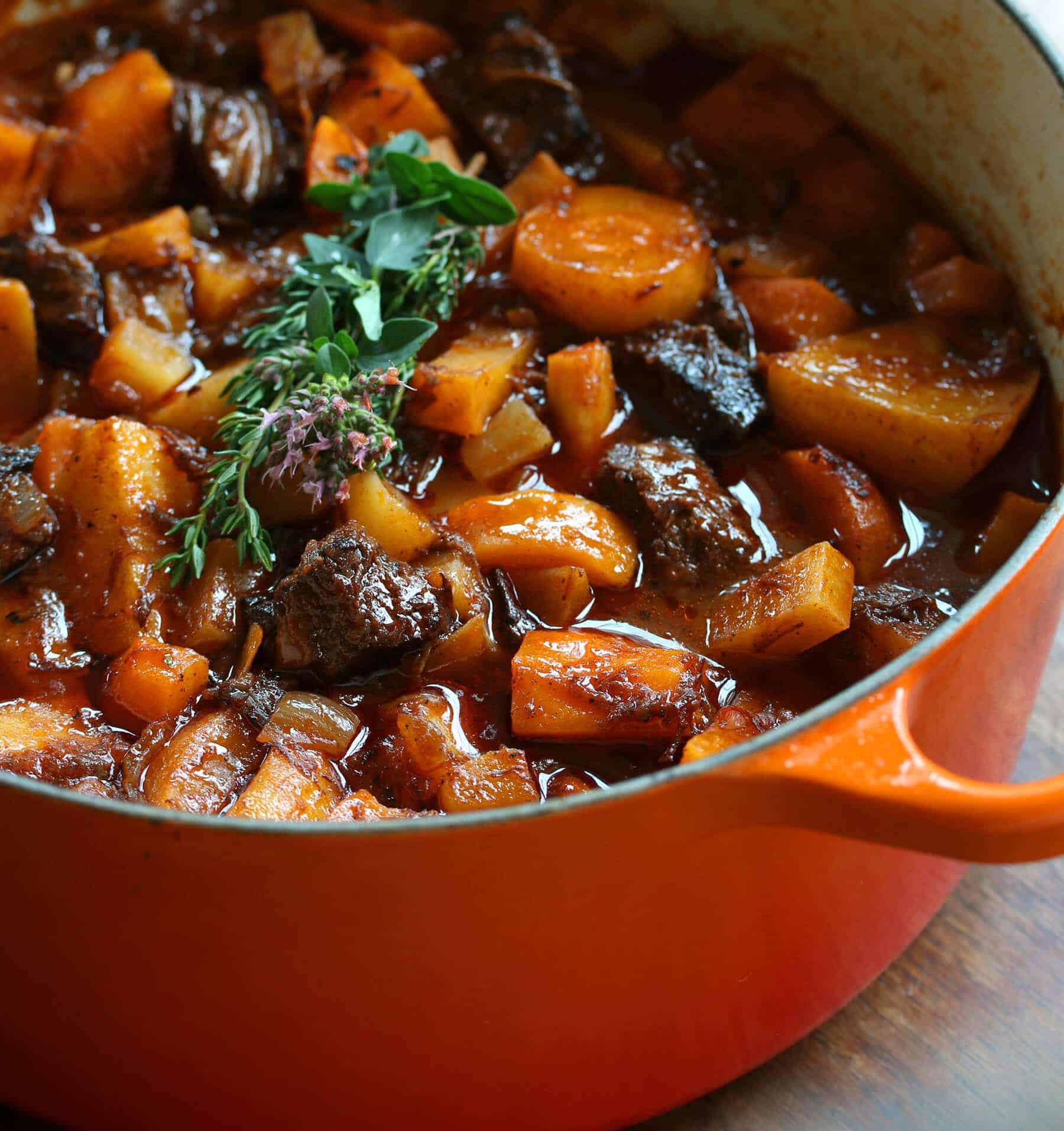 The French really know how to make great stews. Here is one of them and it uses a method similar to that of German Sauerbraten and corned beef to achieve both an exquisitely tangy flavor and a lusciously tender beef.

Many of you have already been introduced to my French friend, Sandrine, from here and here. She shared a recipe with me that inspired this adaptation: A traditional French stew featuring old-fashioned vegetables. Hence, its French name, Daube de Boeuf Aux Legumes Anciens. It’s a delicious and hearty stew packed with a variety of healthy veggies and a flavor you’ll fall in love with.

I thought it only fitting to my Le Creuset dutch oven for the occasion. Sandrine had the fortune of inheriting her great-grandmother’s Le Creuset. Her great-grandmother was an accomplished cook and owned a cafe next to a castle in Lorraine. Of all things to have inherited from her I can’t think of anything more perfect than her old Le Creuset. To think of how many meals were made in that Le Creuset and the stories and history surrounding it. That’s special. There’s a certain romance about cooking utensils that have stood the test of time and were used with loving care to make food as expressions of love.

I don’t have an heirloom like that but someday my daughter and granddaughter – maybe even my great-granddaughter – will have one because my Le Creuset is going to be passed down, too. And being the sentimental traditionalist that I am, I chose mine in the original Flame color that goes back to Le Creuset’s beginnings in 1925. 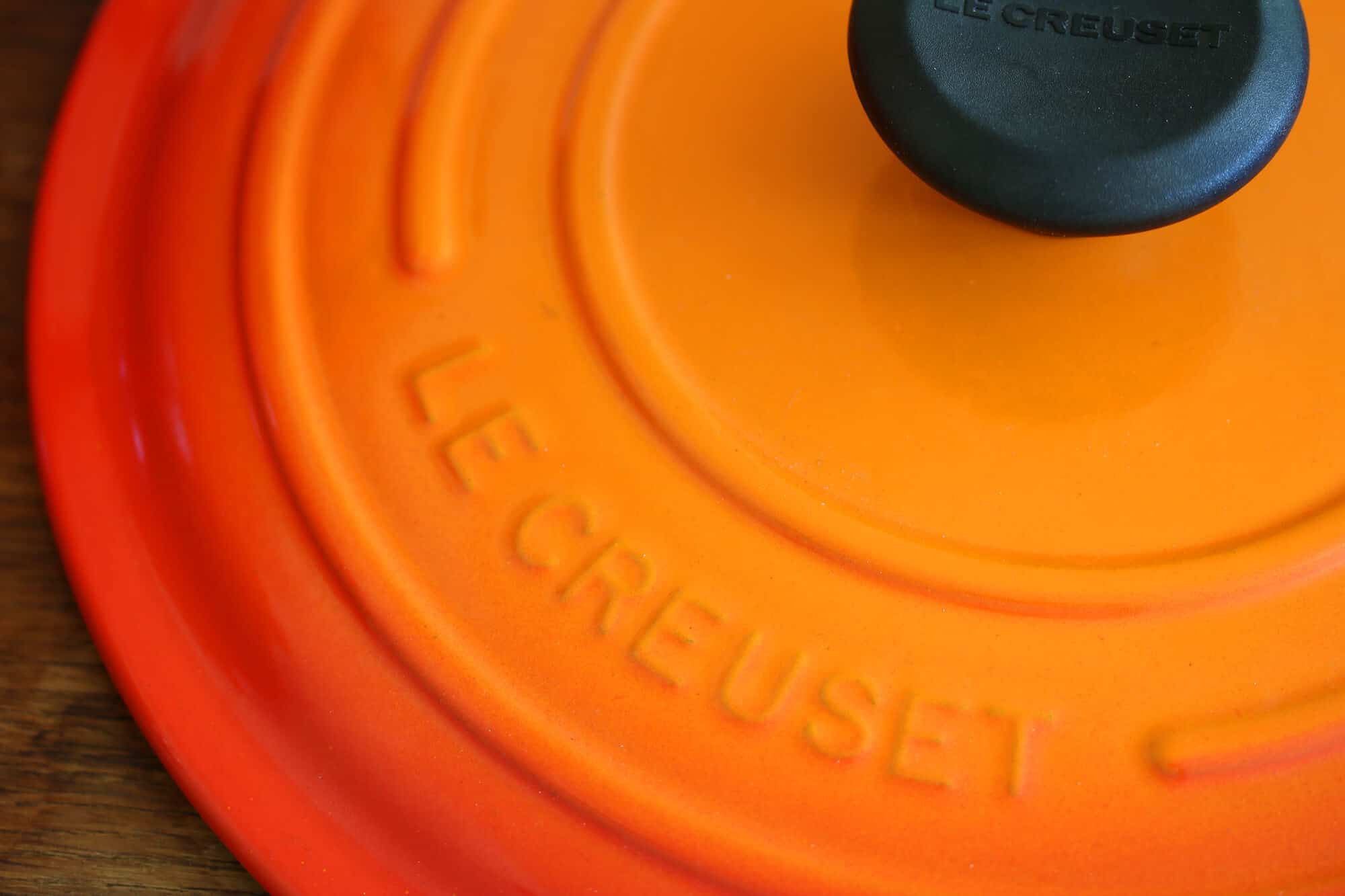 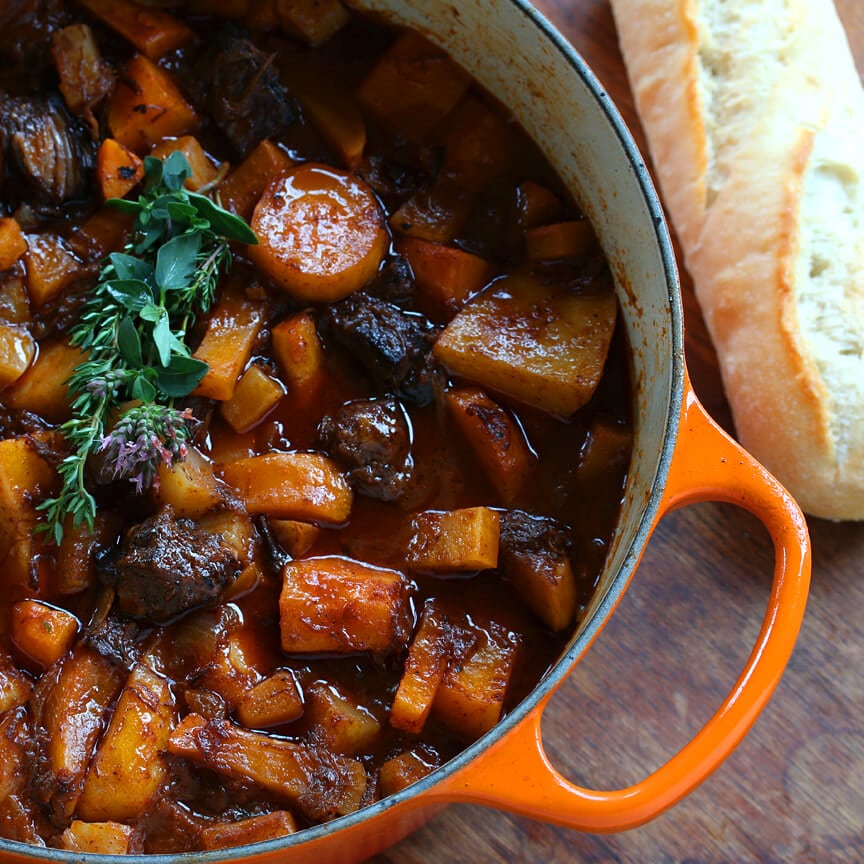 This beautiful and robustly rich stew featuring vegetables that were staples in our grandmother’s and great-grandmother’s kitchens but several of which have since fallen out of popularity, which is a shame.

Turnips, rutabagas and parsnips were as much staples a hundred years ago as carrots and potatoes are today. They contribute such a fantastic flavor and texture to this stew, so be sure to use them and don’t be tempted to look for substitutes.

Another vegetable that would commonly be added to this traditional stew in France is salsify, a delicious and versatile Winter root vegetable in the dandelion family. It’s very difficult to find here in the U.S. but if you have a local produce shop that carries it, grab some and add it to the stew. 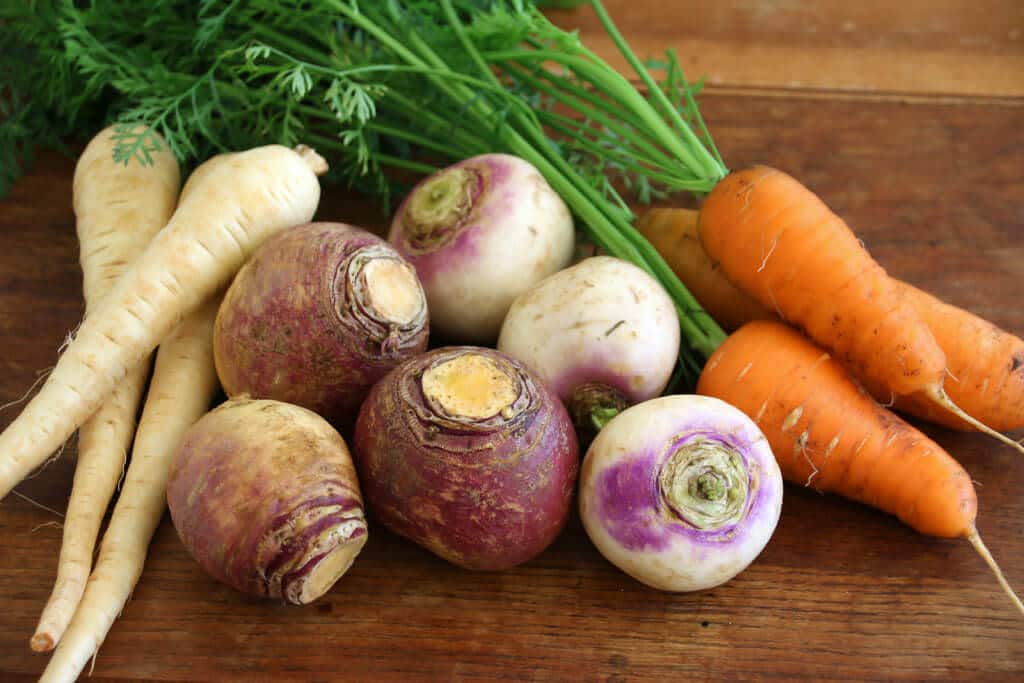 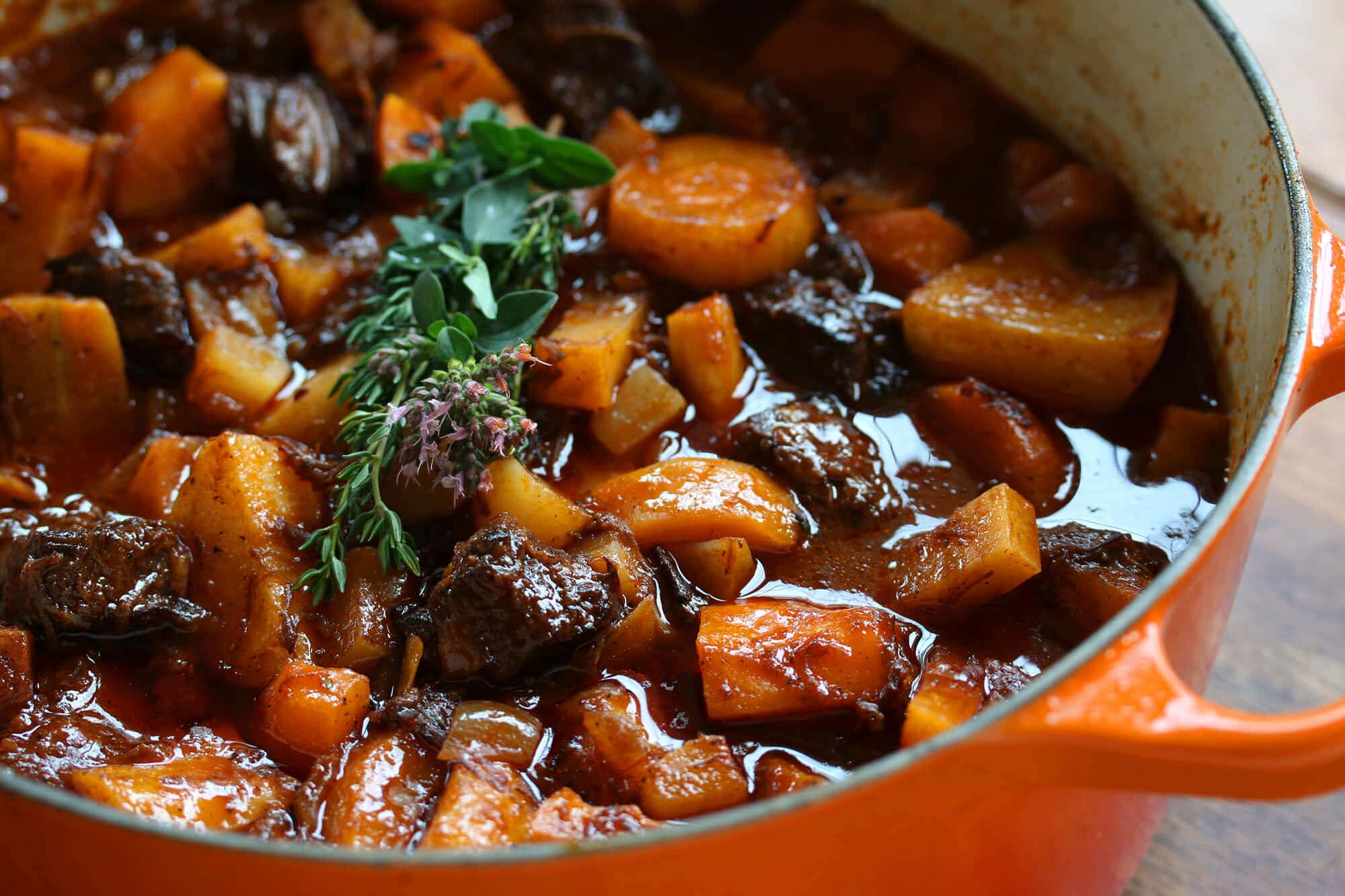 This stew is also naturally gluten free and paleo.

Cut up the meat into 1-inch chunks. The meat is going to simmer for two hours, so that will enough to tenderize it anyway, but generally you want to cut it against the grains for optimal tenderness. 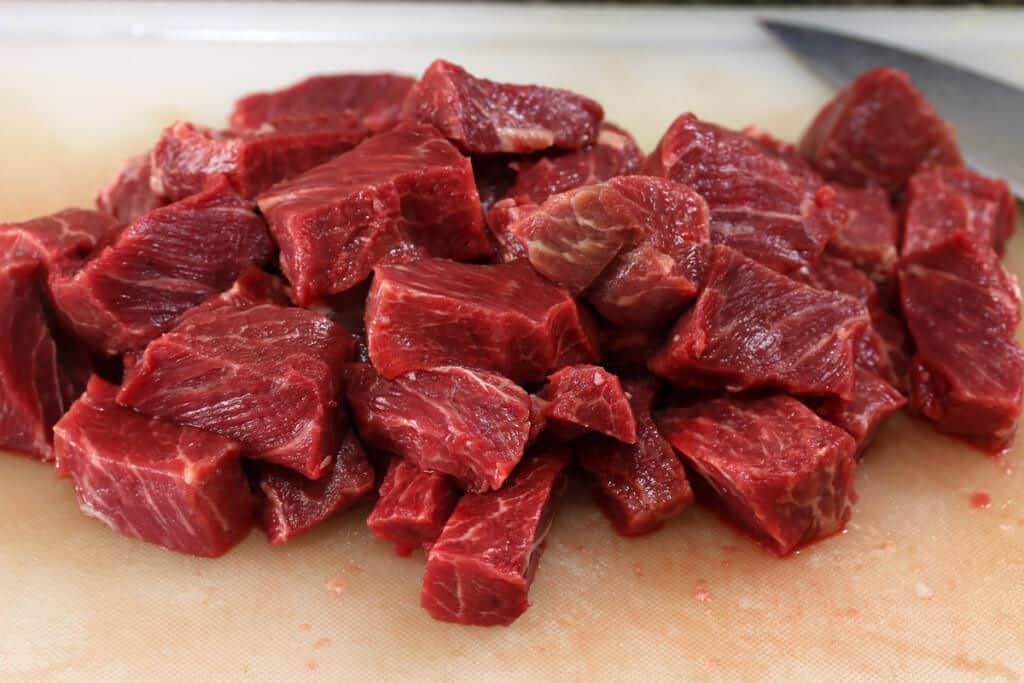 Place the beef in the dutch oven with the onions and carrots and the bouquet garni. 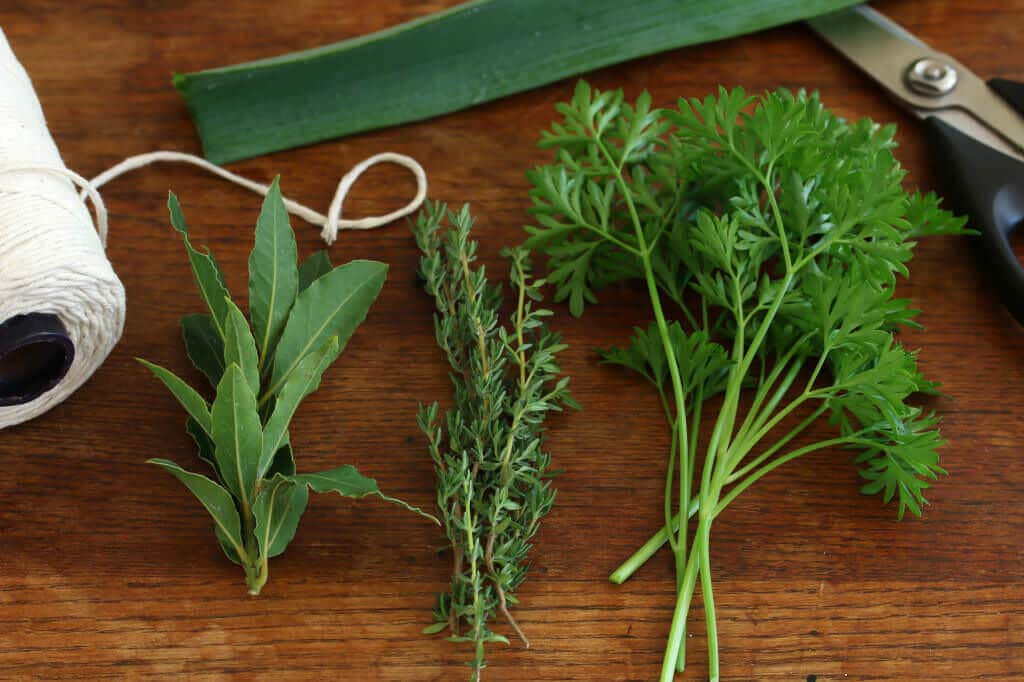 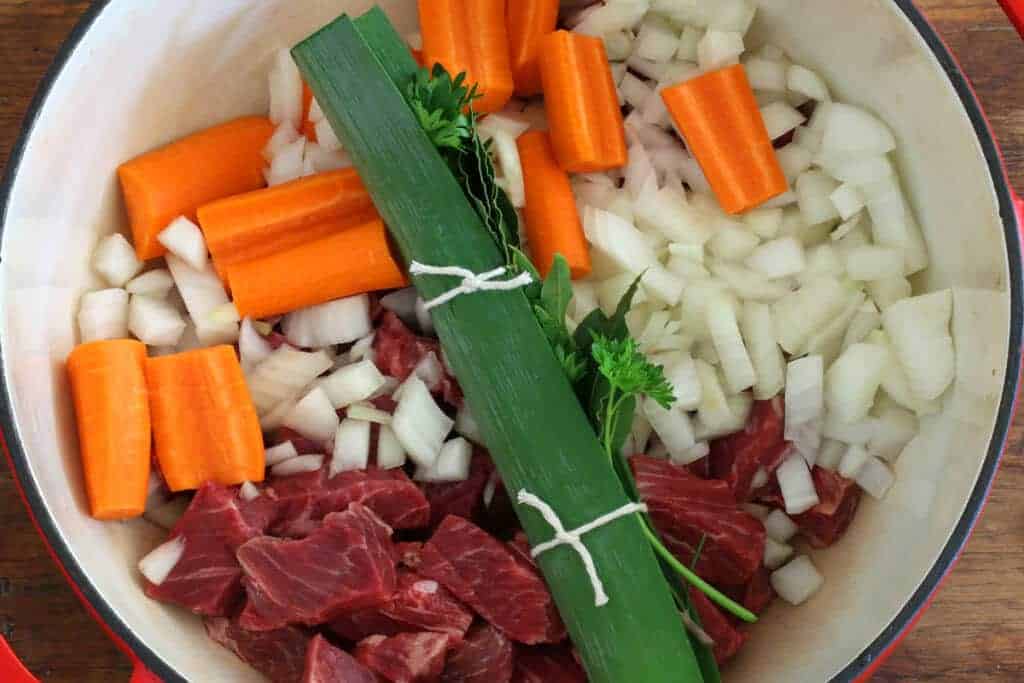 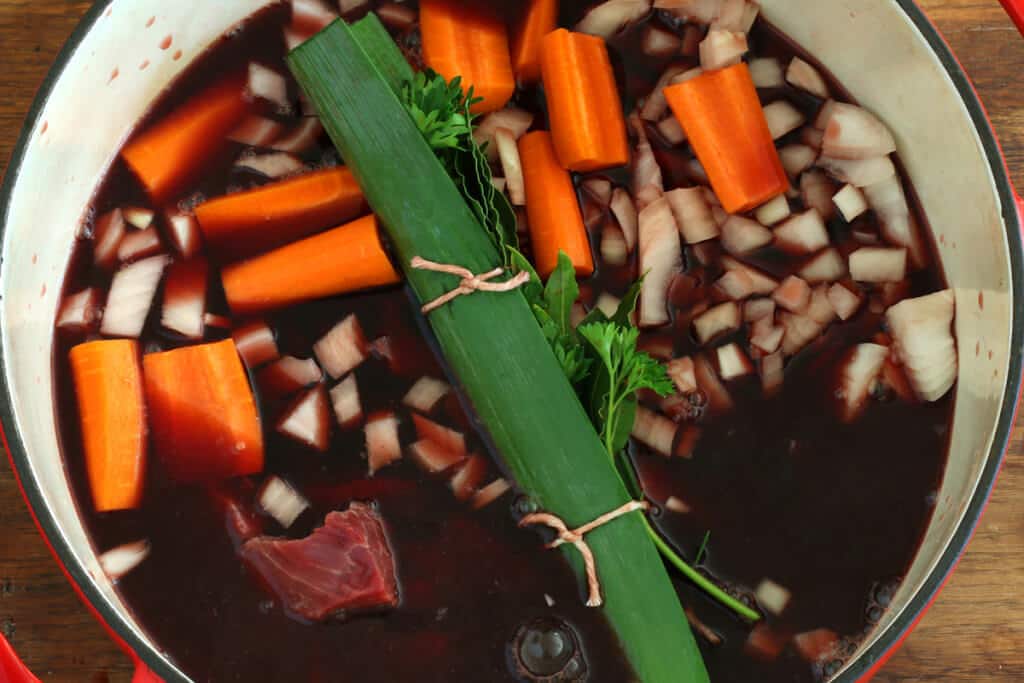 After it has fully marinated, remove the beef and pat it with paper towels to remove the excess moisture. This will enable it to brown properly and get that brown crust that is essential for the flavor of the stew. 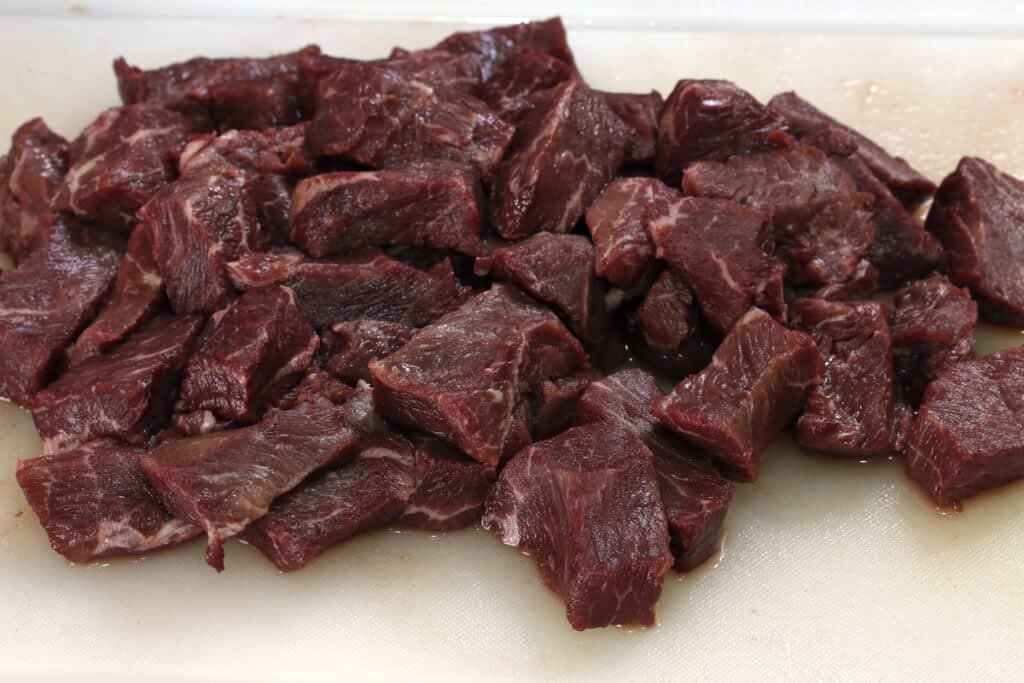 Heat the oil in the dutch oven over medium-high heat once the oil is very hot add the beef, a few pieces at a time. Be sure not to overcrowd the pot otherwise the beef won’t brown, it will simply steam. Generously brown the pieces on all sides. Transfer them to a plate and set aside. 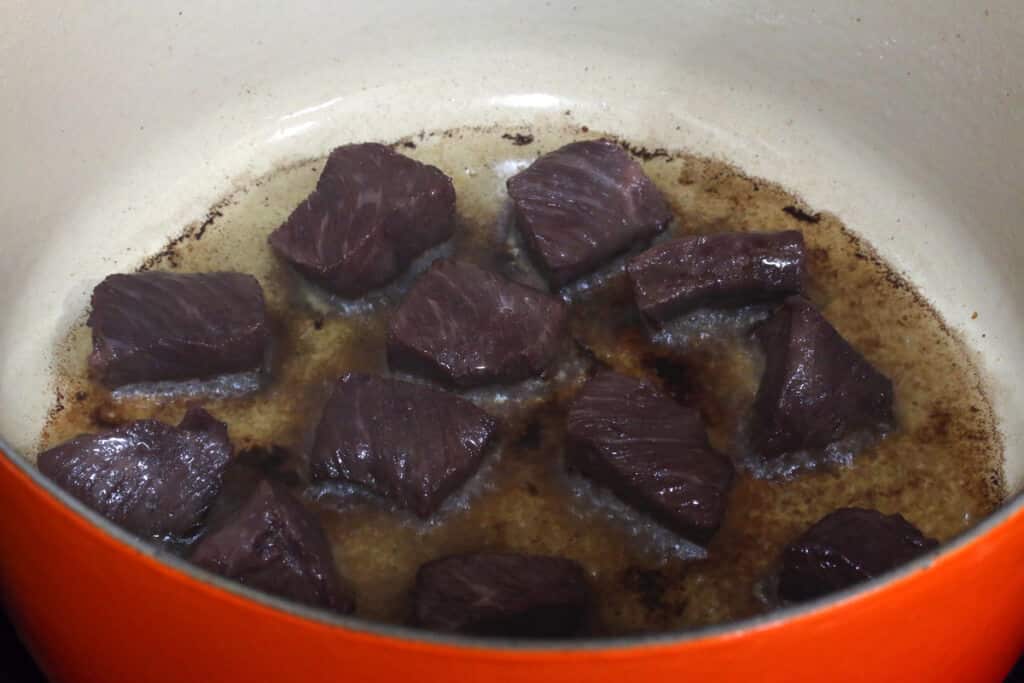 The browned crust that develops on the bottom of you pot – keep it! Don’t throw it out, that’s going to make your stew taste heavenly. Later when you add the liquid your going to do what’s known as “deglazing” the pot. That’s when you scrape up those luscious browned bits and incorporate them into the stew. 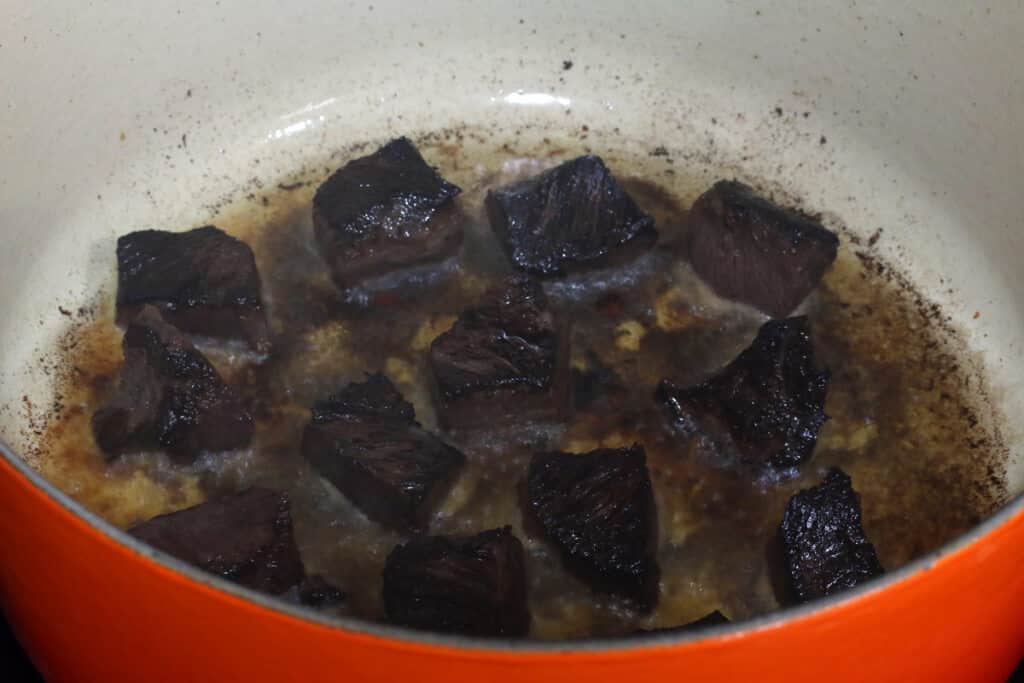 Add the onions and cook until golden brown. Add the garlic and cook for another minute. 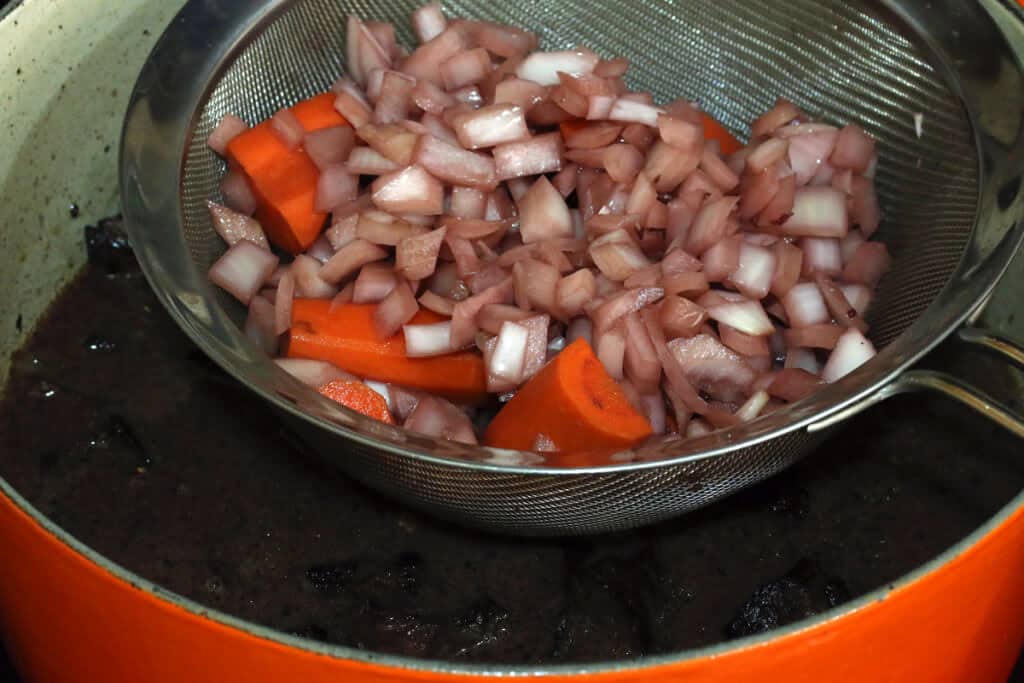 Return the beef to the Dutch oven with the bouquet garni and the whole cloves. (Note: You can choose to wrap the cloves in a bit of cheesecloth or muslin so that you don’t have to fish them out later from the serving on your plate.) Bring to a boil, reduce the heat to low, cover and simmer for 1 hour. 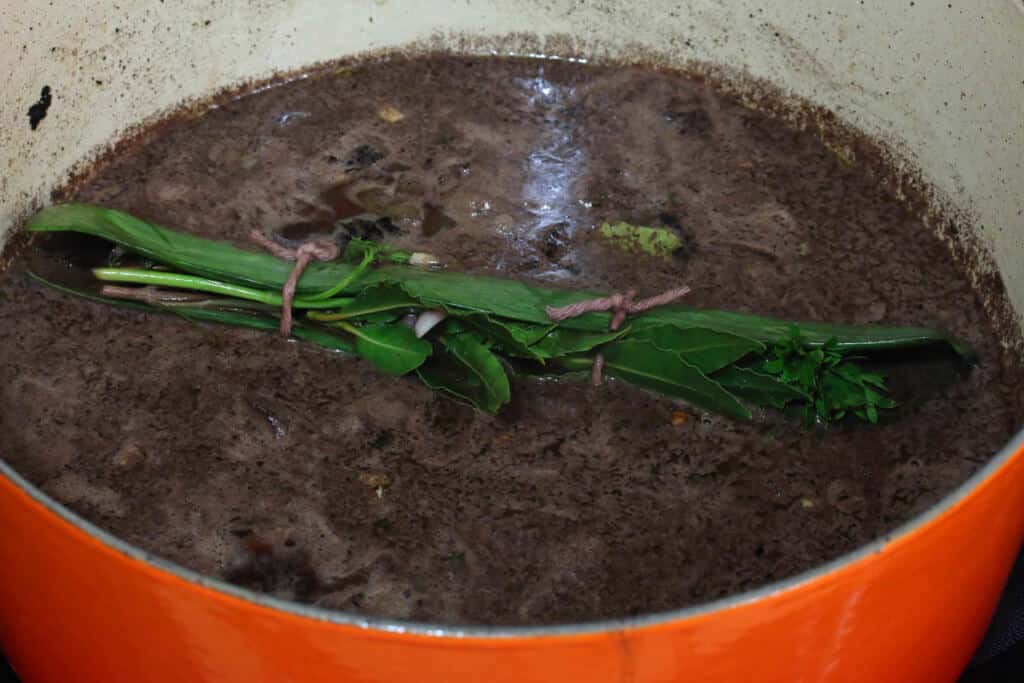 Towards the end of the hour, chop up the vegetables. For contrast and variety, I like to chop each of the vegetables into different shapes and sizes. 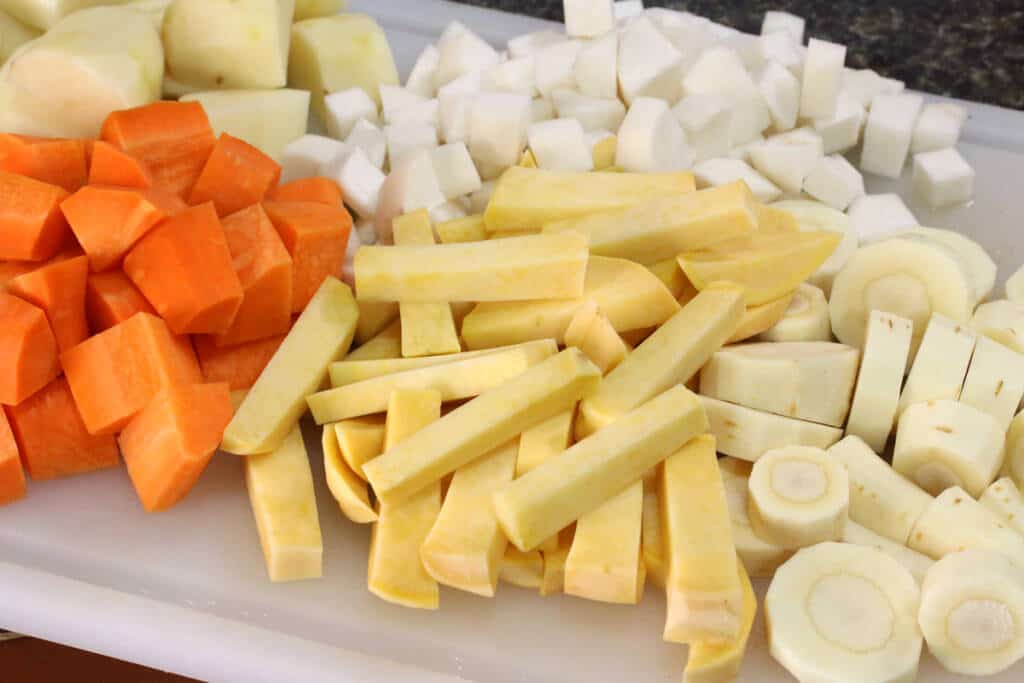 Add the vegetables along with the tomato sauce, salt and pepper. Stir a bit to combine.

Return everything to a boil, reduce the heat to low, cover and simmer for another hour or until the vegetables are soft. Add salt and pepper to taste.

*If you think the beef can handle further cooking without falling apart, go ahead and simmer it for another 30 or more minutes, it will only get better! 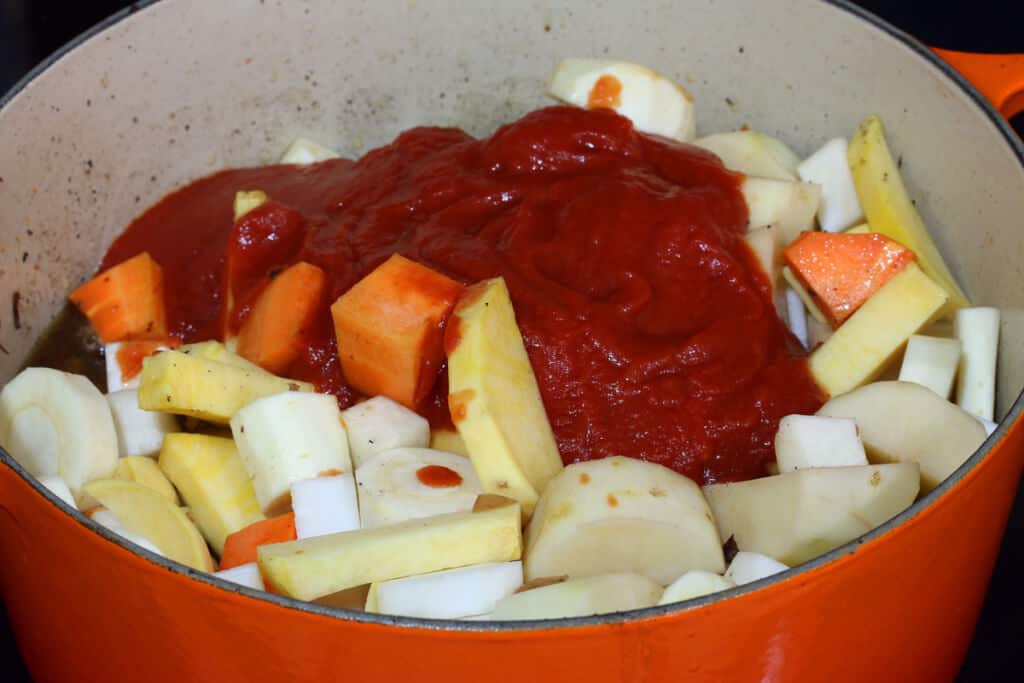 Serve with some crusty bread.

This stew is even better the next day as the flavors have more time to meld. 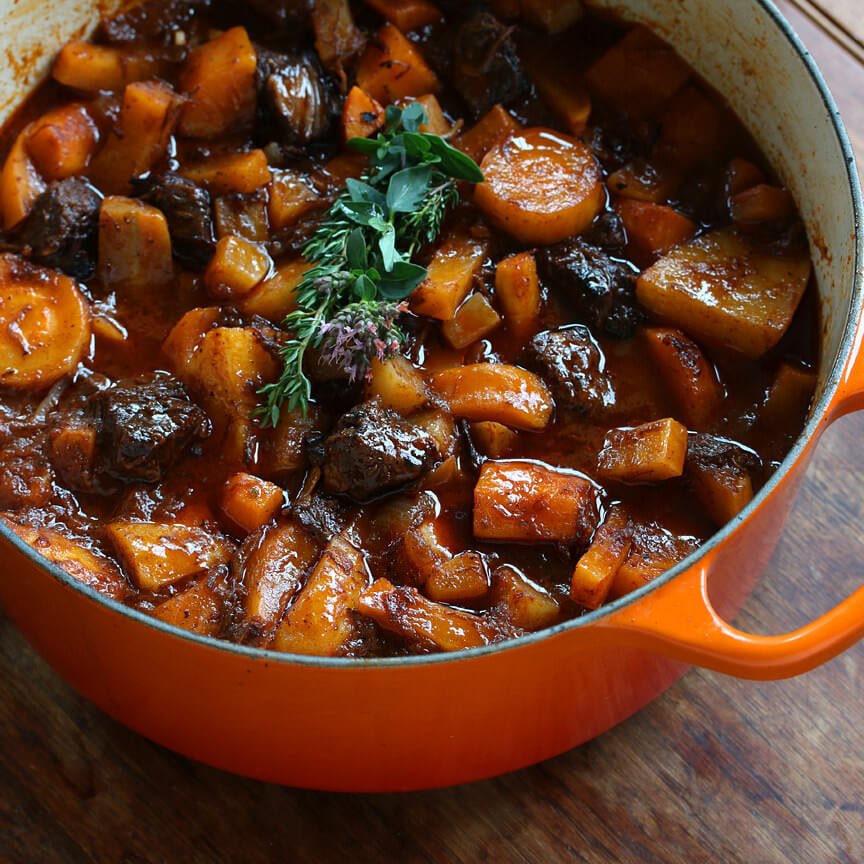