This classic coastal South Carolina dish was originally known as Frogmore Stew, named after the hometown of Richard Gay, a National Guardsman who popularized the dish in the 1960s when he needed something he could cook for his 100 fellow servicemen. The U.S. Postal Service later erased Frogmore from the map, rolling it into the nearby town of Beaufort. Thus, Frogmore Stew became known as Low Country Boil.

(If you ask us, the culinary name change probably had less to do with ZIP codes and more to do with the fact that “Frogmore” is a pretty unappetizing name for a stew….)

Anywho, the classic Low Country Boil is a one-pot mix of shrimp, smoked sausage, corn on the cob and red potatoes. Some variations also throw in mussels, clams, oysters, lobster or crab. But the one essential ingredient is crab boil seasoning, a mix of spices such as mustard seeds, coriander, cayenne pepper, bay leaves, dill and allspice. Some people swear by Zatarains, but we’re partial to Old Bay. Essentially, you throw everything in a pot of boiling water and cook until it’s done. We’ve done this once before, using Paula Deen’s recipe.

Grilling it is just about as simple.

For our version, we included smoked, spicy sausage (something the Fine Cooking feature, which is focused more on grilling seafood, doesn’t include) and we didn’t use potatoes. We started with the sausages, figuring they’d need the longest time on the grill. Then we threw on the shrimp – which we had coated with oil and Old Bay – and the corn cobs – which we’d cleaned of their silks but left in the husks so they wouldn’t dry out too much on the grill. Finally, we threw on some clams.

Grilling the food gives it a marvelous flavor that makes a fantastic update to the classic Low Country Boil. The shrimp and the clams were charred and smoky, and the fresh corn was perfectly plump and juicy. And the spicy sausages took on the great flavor of the grill. In place of potatoes, we served crusty French bread. 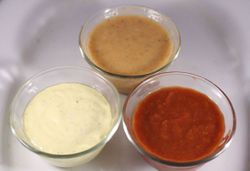 For sauces, we followed Fine Cooking’s lead and made three separate sauces for dipping: the Bloody Mary Cocktail Sauce, the Orange-Saffron Aïoli, and the Old Bay Dipping Sauce. Each one was a fun option, and our guests really seemed to like them!

We were especially excited about the idea of the Bloody Mary sauce, since it sounds like such a cool idea. But, truth be told, it turned out disappointingly bland. Even after we amped up the spices – in some cases doubling or tripling what the recipe calls for – we still couldn’t tell much difference from a classic cocktail sauce.

The different sauces were fun to try, but next time we’ll probably just go with an easier cocktail sauce and the Old Bay sauce, which is just the seasoning, some shallots and a load of melted butter.

All in all, the meal was terrific. We invited a few friends over and leisurely chatted in the backyard over drinks while the food cooked on the grill. Tradition dictates beer with a boil, but we’d opted for lemonade spiked with Firefly Sweet Tea Vodka – which, we just learned, also hails from South Carolina! We’re so authentic!

Grilling puts a really terrific new spin on a Low Country Boil. But the best part of a boil is the experience of eating it: spreading everything out on some newspaper, sitting around the table with friends, reaching across one another to grab an ear of corn or dip a shrimp into a bowl of sauce.

Close your eyes, and you can almost hear the ocean waves. 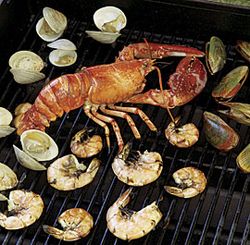 There are so many good reasons to grill shellfish. Whether it’s shrimp, lobster, clams, mussels, or oysters, grilling shellfish is as simple as can be—in most cases, a brush of olive oil and a sprinkle of salt are all you need in the way of prep—and it’s a great way to serve a crowd. But the best reason is flavor. Nothing quite matches the sweet, intense, and slightly charred taste of shellfish when it’s cooked on the grill.

The process is inherently easy, but there is something of an art to grilling shellfish:

STEP ONE: PREP IT

Grill over relatively high, direct heat and cover the grill to keep the heat in; otherwise, the cooking time will be too long and the shellfish will get tough. See the individual recipes for specific cooking times.

Finally, serve your grilled shellfish with one or more of these tasty sauces, and you’ve got the makings of a perfect summer cookout.

Bloody Mary Cocktail SauceFine Cooking (June/July 2009)Subscribe to Fine Cooking2 small lemons1 small lime1 cup ketchup1 cup Heinz Chili sauce2 heaping Tbs. prepared white horseradish; more to taste2 Tbs. vodka1 Tbs. Worcestershire sauce2 tsp. puréed canned chipotle chile in adobo; more to taste1/8 tsp. celery salt; more to tasteFinely grate the zest from the lemons and then juice them. Juice the lime. In a nonreactive bowl, mix 3 Tbs. of the lemon juice, 2 Tbs. of the lime juice, and all of the zest with the ketchup, chili sauce, horseradish, vodka, Worcestershire, chipotle, and celery salt until well combined.The sauce can be refrigerated for up to a week. Add more horseradish, chipotle, lemon juice, or celery salt to taste before serving. The sauce can be refrigerated for up to 1 week.

Orange-Saffron AïoliFine Cooking (June/July 2009)Subscribe to Fine Cooking1 large orangePinch saffron, threads crumbled2 large cloves garlic, roughly chopped or grated1 tsp. Dijon mustard1 large egg yolk1/2 cup extra-virgin olive oil1/2 cup vegetable oil; more as neededKosher salt1/4 cup pitted and finely chopped Niçoise olivesTip: This recipe contains a raw egg yolk; if that’s a concern, use a pasteurized egg instead.Finely grate the zest from half the orange and then juice the orange. Put 1-1/2 Tbs. of the juice in a small bowl along with the saffron, and let sit for 10 minutes.In a food processor, combine the saffron mixture, orange zest, garlic, and mustard and pulse until the garlic is puréed, about 15 seconds. Add the egg yolk and process for 10 seconds. With the machine running, slowly pour the olive oil and vegetable oil through the feed tube until the sauce is thick and well combined. (If you like a thicker texture, add a little more vegetable oil.) Season to taste with salt.Refrigerate the aïoli for at least 2 hours to let the flavors marry. Fold in the olives just before serving. The aïoli will keep for 1 week in the refrigerator.

Old Bay Dipping SauceFine Cooking (June/July 2009)Subscribe to Fine Cooking8 oz. (1 cup) unsalted butter, cut into 16 pieces1 Tbs. Old Bay Seasoning1 Tbs. grated shallot (about 1 large shallot)In a small saucepan, bring 3 Tbs. water to a simmer over medium heat. Reduce the heat to low. One piece at a time, whisk in the butter, waiting until each piece is completely incorporated before adding the next. Once the consistency begins to change from watery to creamy, with a pale yellow hue (after 4 or 5 pieces of butter have been whisked in), emulsification has begun. At this point, you can add 2 or 3 pieces of butter at a time, making sure they are almost fully combined before adding more.Whisk in the Old Bay and shallot. Turn off the heat but leave the pan on the burner to let the flavors develop. Serve warm.This sauce can be made up to 2 hours ahead and kept in a warm spot.Photos: Scott

Prepare a medium to medium-high charcoal or gas grill fire (about 400°F).

Meanwhile, remove all but the innermost layer of the corn husks. Gently bend back this remaining layer of husk without detaching it so that you can remove the silk. (Don’t worry about getting all the silk off—the rest will cook off or soften on the grill.) Pull the husks back into place so that the corn is loosely covered.

Put the corn on the grill and cover. Turn when the husk is nicely browned on one side, after 2 to 3 minutes. Continue to cook and turn until the corn husk is toasted on all sides, 5 to 6 minutes total. Serve immediately.

Through this article, we hope to help you understand Low country boil on the grill