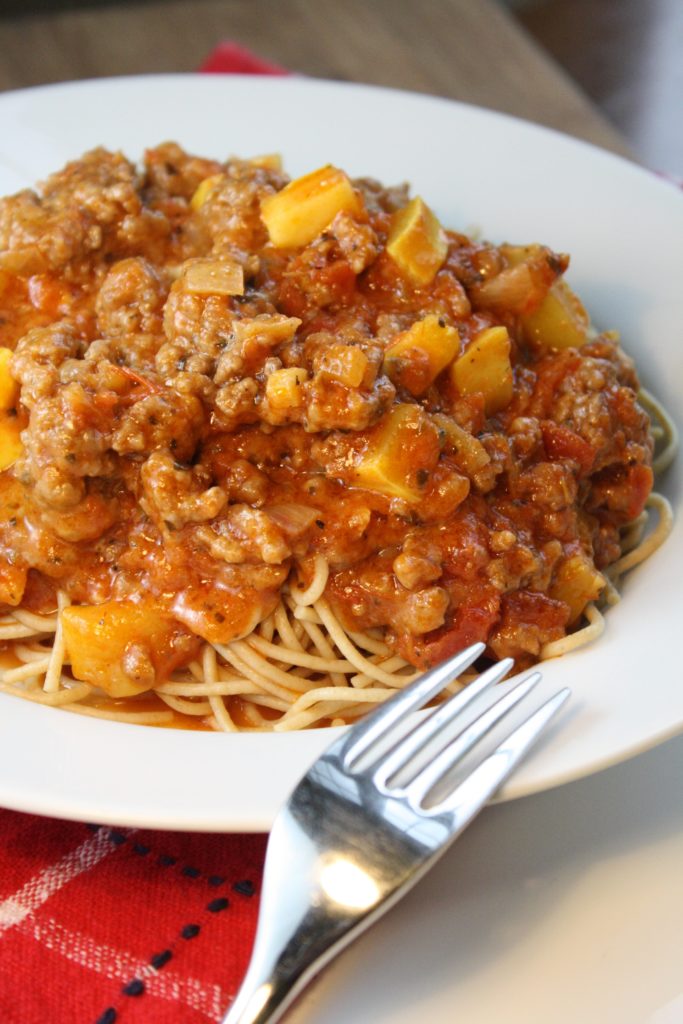 There’s a reason why chef-prepared food usually tastes better than the food you cook at home. Actually, there are a few reasons but the biggest is that chefs know the secrets to building flavor in a dish. Most anyone can follow a recipe but being able to read between the lines of a recipe and knowing how to get the most out of your ingredients are the skills that make a good dish great (and make a jarred marinara sauce taste like homemade).

Reading: how to add flavor to spaghetti sauce

How to Build Flavor

1. Start by choosing the best quality ingredients you can find and afford. Use real Parmigiano Reggiano cheese instead of the less expensive and less flavorful parmesan. My Almost Homemade Spaghetti Sauce gets a great deal of its robust flavor from the addition of freshly-grated Parmigiano. Would it be tasty if I substituted parmesan? Probably, but the finer cheese gives me the eyes-rolling-in-the-back-of my-head-it’s-so-good taste that makes my mouth water.

2. Most recipes, many of mine included, will direct you to “season to taste with salt and pepper” as a last step before serving your dish, but what does that really mean? How much salt and pepper should you add? Instead of adding salt and pepper as an afterthought at the end of cooking, add it gradually, in small quantities throughout cooking. For example, the first step in many recipes involves sweating vegetables. Whether your recipe instructs you to or not, get in the habit of sprinkling your onions, carrots, garlic or whatever with a big pinch of salt as soon as you’ve added them to the pan. The salt will not only create flavor in your pan, it also helps break down the veggies so they’ll cook a little faster. Whatever you’re cooking, seasoning as you go will give you a better tasting final product.

3. Deglazing is another way to take advantage of every delicious morsel of flavor in your pan. By stirring in a liquid — hopefully one that packs a flavor punch like a rich stock or wine — you’re adding those tastes to the mix along with the tiny bits of yum that may be stuck to the bottom of the pan. Instead of leaving them there to eventually burn, deglazing releases them so they’re incorporated into your dish, as well.

4. Simmering and reducing sauces or pan juices both cause liquids to reduce in volume (it evaporates away) while concentrating flavors. With simmering, the result is more subtle with a slight thickening developed over a longer period of cooking time. The longer cooking time gives the flavors in each component of your dish more time to mix, which is why sauces simmered for hours are always more flavorful. Reduction requires bringing liquids up to a boil, which thickens them quickly.

When I ask my husband what he’d like for dinner, spaghetti is always his answer. He doesn’t want his pasta with a homemade marinara or a rich bolognese sauce. He wants his noodles smothered with spaghetti sauce from a jar and ground meat, any jarred sauce is fine, any meat will do. After 15 years of making ‘spaghetti’ I’m officially over it. Done. Down for the count. There’s a new sauce in town and it’s tasting good. The jarred sauce remains — gotta give him something — but the diced squash, basil and oregano, grated Parmigiano and two, count ’em, two simmers amp up the flavor and satisfy my taste for a little something special. If you’re really feeling fancy stir in a couple shakes of hot sauce or sriracha just before serving for a spicier take on my Almost Homemade Spaghetti Sauce.

TIPS:Use real Parmigiano Reggiano cheese, not parmesan, in the sauce for maximum flavor.

Season the pasta water well. It’s your one opportunity to add flavor directly to the noodles.

Add any veggies you like to this, just adjust cooking times accordingly. Certain veggies like carrots take longer to cook so add them earlier in the recipe.

The tools section may contain affiliate links to products we know and love.