The team at familycuisine.net test products that claims their item has a way to make a great boiled egg. The Aroma Rice Cooker pictures boiled eggs on their packaging. On Aroma’s website, the recipe for boiling eggs related to this particular Rice Cooker because it has a steamer.

If you would like to see the unboxing of the Aroma Wholemeal Rice Cooker 4 – 20 cup, click here.

Now on to cooking and testing the Aroma Rice Cooker 4 – 20 cup.Following the instructions:

Place the bowl inside of the Aroma Rice Cooker

Place enough water in the measuring cup, to reach the first fill line.

Place the lid on the Aroma Rice Cooker

Bring to boil, about 13 minutesTurn the Aroma Rice Cooker on.

Bring to a rolling boil. It took 13 minutes for the water to boil.

For this product test, we only used two eggs, but you can use as many eggs as you like in a single layer. Cooking times may vary for a double layer of eggs.

Eggs do not move around in the steamer, unlike indirect boiling water. This makes for a better boiling experience for the egg and a less aggressive way of cooking eggs.

Because the water is rolling, the eggs do move around, unlike steaming eggs.

Prepare an ice bath. An ice bath is made up of icy cold water and ice cubes. Ice baths help the cooked eggs to cool quickly and peel better.

After 12 minutes, turn off the Aroma Rice Cooker, and remove the boiled eggs and place them into the ice bath for 5 minutes.

After 5 minutes in the ice bath, remove the eggs. We peel the eggshell two ways.

Read more: Quick and Easy Boiled Shrimp Recipe | Family CuisineThe first method we tried, is to use a regular dinner/butter knife, the blunt side and crack the eggshell around the middle and top of the boiled egg, which will allow the boiled egg shell to peel easily off the egg.

Peeling the boiled egg, in the ice bath allows the water will seep into the shell as you peel it and the shell will remove easily.

The moment we have been waiting for, did the Aroma Wholemeal Rice Cooker make the perfect boiled egg?

The result, a perfect hard-boiled egg steamed in the Aroma Wholemeal Rice Cooker, 6 – 20 cup. We are really happy with this result.The egg white is soft and the yellow is creamy.The second way to peel eggs. Roll the egg back and forth on the countertop to crush the shell. The center then the top and bottom of the egg.

In this case, we did not peel the egg in the ice bath, but could have. The shell comes off quite easily.

Two eggs steamed for 12 minutes. Two ways of peeling the eggs. The result, perfect hard boiled eggs, because they were steamed. Eggs peel better when they are steamed rather than boiled. Also because the eggs were steamed, they came out perfect. The egg white is creamy and the yolk velvety.

To answer the questions above:

The results are at the beginning of this page.

The packaging is bright and allows you to believe that Aroma Wholemeal Rice Cooker 6 -20 Cup is a simple and easy kitchen gadget to use.

Some of the features of the Aroma Wholemeal Rice Cooker 4 – 20 Cup, as promoted on the packaging are:

The Aroma Rice Cooker is well packed in the decorative box. It is lightweight.

The inner lid of the packaging, show instructions and a little more product information.

Unpacking the Aroma Rice Cooker, the instructions are on the very top.

Read more: how to make boiled peanuts in instant pot | Family CuisineThe Aroma Wholemeal Rice Cooker comes with a Glass Lid and a keep cool plastic handle. The steel rim helps to seel the lid on the cooking pot.

The steamer is the next item in the box

Also read: The top 10+ stew beef with potatoes and carrots

Measuring cup packed inside the box

The Aroma Rice Cooker external pot is a strong white metal unit, with plastic handles and it is lightweight.

All items now taken out of the packaging

Unpackaged and ready to use

Inside the Aroma Wholemeal Rice Cooker is a stainless steel plate, which is the heating plate.

The center is pressure sensitive. When the inner bowl is placed inside, the unit will turn on. A good safety feature.

The metal bowl sits on the heating plate, which pushes the button down when food is added.

There are marking levels on the bowl to assist you when measuring food or liquids.

Inner bowl placed inside of the Aroma Wholemeal Rice Cooker.

The Aroma Rice Cooker has a plastic spatula.

The steamer fist nicely on top.

To finish off the unboxing, we place the lid on top

The Aroma Rice Cooker has a power indicator light and a toggle switch to turn the unit on to start cooking.

Aroma Rice Cooker is easy to clean, and the water we used to boil eggs, heated up as within 13 minutes. Which is about the same as using a pot on the stove.If you are looking for a small appliance to cook meals, the Aroma Wholemeal Rice Cooker may just be for you.

To purchase the Aroma Rice Cooker, Amazon is your easiest option, you can get it from Amazon through the shop now button below.Read more: How to Cook Lentils | Family Cuisine 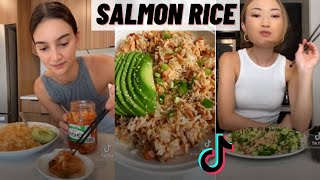 Here are the best information about tiktok salmon and rice voted by readers and compiled by Family Cuisine, invite you to learn

Top 10+ calories in a cup of cooked brown rice