Most people agree that boiling is the most effective and easiest way to purify water. In most cases, the water that comes out of your tap will not need further purification. However, not all areas have potable water. Also, in the event of an emergency, you may need to find alternate water sources as well such as streams or rivers which may contain invisible contaminants. In either of these scenarios, boiling water is an effective, reliable, and quick way to make sure water is safe to drink. Keep reading to learn about how to purify tap water by boiling and why this method is so widely used.

Reasons to Purify Water by Boiling

The main reason people wish to boil their water is to kill contaminants that may be present in water from their taps. When done properly, and for a long enough time, boiling water can make it safe for drinking. The appropriate amount of heat can kill harmful organisms such as bacteria, viruses, and protozoa that often exist in contaminated water, even if they are invisible to the naked eye. Drinking contaminated water often results in symptoms such as diarrhoea, vomiting, dehydration, exhaustion, nausea, and stomach pain.

According to the World Health Organization, water needs to reach a temperature of 70o Celsius to kill 99.99% of bacteria.

Aside from the temperature, your elevation can surprisingly factor into the purification process as well. Higher elevation areas that are 1,981 metres above sea level or more will need to boil their water for three times as long as people at a lower elevation. Fortunately, that still isn’t very long though and if you want, you could be drinking clean water in a matter of minutes.

How to Boil Water: The Method

Now that we have covered some basic information about how to purify tap water by boiling, follow these simple steps to ensure that your boiled water becomes safe to drink every single time, with no exceptions.

Method 1: Filter the Water to Remove Cloudiness, When Necessary.

If the water you want to purify is already clear you can skip ahead to step #2. If your water is cloudy, start by filtering it through either a clean cloth, paper towel, or coffee filter, to trap and remove larger pieces of debris. Wait for the remaining debris to settle and draw the clear water off of the top.

Method 2: Turn Up the Heat and Wait For the Purification to Begin.

Add the clear water to a pot, with or without a lid, and place it on the stove. Turn up the heat to a medium-high or high temperature.

Method 3: Wait For the Water to Achieve a Rapid and Rolling Boil. 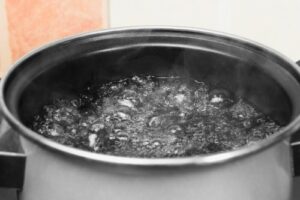 Give the water time to develop into a rapid or rolling boil. When we say a rapid boil, we aren’t talking about the small bubbles that develop on the bottom of your pot initially. Instead, wait for the water to have substantial and continuous bubbles on the surface.

Method 4: Set a Timer for One to Three Minutes, Depending On Your Elevation.

Read more: how to pull the tip off a boiled egg | Family Cuisine

Once you achieve a rolling boil, continue by setting a timer for a minimum of one minute. Or, as we briefly mentioned above, if you are 1,981 metres above sea level or more you should set your timer for three minutes. If you want to play it safe, you can always boil your water for an extra minute.

Method 5: Let the Water Cool Before Storing It With a Lid.

When your timer expires, you can remove the water from the heat source and let it cool. Even before the water cools it is safe to drink, no need to wait, so feel free to use it for warm beverages or however you please. Once the water reaches a more lukewarm temperature, pour it into a clean container for storage, preferably one with a lid to keep outside contaminants away.

Attention: Boiling water will remove contaminants and bacteria, however, it will not remove the colour, smell, or taste so don’t be surprised if it is cloudy or still doesn’t look super clear.

Other Important Things to Consider

The following sections explore further considerations that will help you make sure you are not only boiling water correctly but continue to do so without any issues.

How Long Does Boiled Water Remain Safe for Consumption?

After boiling water, it remains safe to drink for approximately 24 hours. However, if you are able to refrigerate the water it can be used as drinking water for a bit longer. Keeping a lid on your water after boiling can also help keep it clean and sterile for longer.

Boiling water could make it taste flat, which alters the flavour slightly. This is caused by the evaporation and release of air during the boiling process. While it may seem counterintuitive to think of water as flat, the loss of air can create a noticeable difference for some people. Luckily, there is a quick remedy for this though. To refresh the flavour simply pour the water back and forth between two receptacles a few times and the water will naturally trap more air and regain more of its familiar flavour.

Can You Boil Water for Too Long?

There are some myths circulating about whether or not it is possible to boil water for too long. Suffice it to say, you can not boil water for too long so don’t worry if you forget about your timer and it boils for longer than you planned. The worst thing that could possibly happen is too much of the water will evaporate and you will have to repeat the process again to get the amount you initially desired.

Can You Kill Bacteria by Boiling Water?

Yes, bacteria and other contaminants such as parasites can be killed during the boiling process, however, not if it is done incorrectly. Bacteria like cholera, salmonella, shigella, E.coli, coliform, and more can be found in some water sources which, when consumed, can often lead to serious illness and can even lead to death if untreated.

Parasites found in streams and rivers like giardia can also be killed by boiling water.

Boiled water is not only sterile but it can also be used to sterilise. Boiling water has been used as a sterilization method for many, many years. Most people clean and sterilise baby bottles using boiling water but other objects such as tweezers, eating utensils, or even combs and brushes can also be sterilised in this manner. Just make sure you don’t keep them in the boiling water for too long as more fragile materials may start to melt, making them completely unusable.

Polluted Water: When Boiling Water Is Not Enough

Unfortunately, boiling water does not make it safe for drinking if your contaminants aren’t organic, as is often the case with broken infrastructure, chemical spills, and factory runoff.

Boiling water will not make it safe for consumption if the pollution is caused by fuel or toxic chemicals. For example, pesticides and herbicides that can often contaminate drinking water as a result of industrial farming can not be removed by boiling alone. Boiling water will not remove heavy metals either. In these scenarios, you may also need to filter the water before it can be consumed safely.

The Environmental Protection Agency recommends drinking bottled water in the event of an emergency, when available. However, they also have very specific guidelines regarding the use of chlorine bleach for purification as well. Here’s a brief overview.

With bleach that has a 6% concentration, add two drops to one litre of water, stir, and wait for 30 minutes. After 30 minutes smell the mixture, if it smells a bit like chlorine then you should be good to go. If not, add a couple more drops and wait for 15 minutes. The chlorine bleach method can be particularly beneficial if you lose access to power and are unable to heat up your water supply for boiling. Of course, many people still prefer to boil water because it doesn’t deposit a new chlorine smell.

Chlorine and iodine tablets are other common methods used for water purification. The tablet method is most popular for travellers as the tablets can easily be carried in a pack and don’t require any additional equipment other than the water container.

High-quality water filters are another option that works hard to remove contaminants and other germs from tap water. Some home water filters also serve as a container and can remove trace amounts of lead and pharmaceuticals found in water.

Camping water filters are also highly portable and come in a wide variety of structures. Some use infrared lights to purify water and others use chemicals or advanced filtration systems.

Now that you know how to purify tap water by boiling, it could possibly save your life or at the very least spare you a tummy ache someday down the line. Or, maybe you won’t have to wait at all and you can employ your newfound information on a hiking or camping trip sometime soon.

Either way, by now you should be able to purify and boil water safely, effectively, and with confidence, regardless of the purification method, you choose to pursue. Just remember, a rapid boil that lasts for one minute will be enough to turn your contaminated water into drinking water. Unless of course, you are at high elevation, then boil your water for 3 minutes and you should be all set.

Read more: the kitchen how to peal a hard boiled egg | Family Cuisine