If you’re wondering how long to boil brats before grilling them or making pan fried brats, this post will tell you everything you need to know, PLUS how to make beer boiled brats, or how to simmer them in sauerkraut. 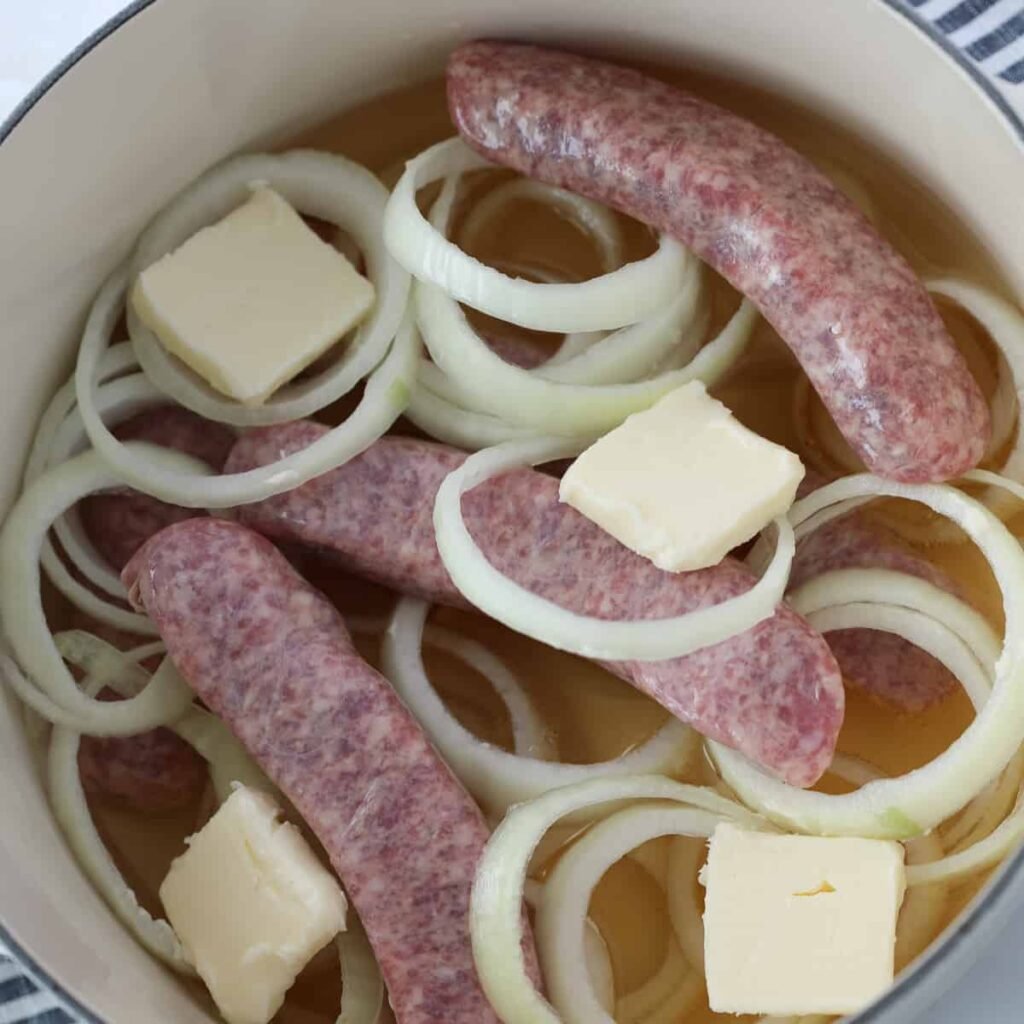 Reading: how to know when boiled brats are done

A printable recipe card is at the bottom of the post

This post may include affiliate links, including links to Amazon products. Read the full disclosure here.

For authentic German meal, serve the boiled brats (after frying or grilling) with a side of warm German potato salad, sauerkraut, stoneground mustard, and a pint of beer.

If you’re looking for even more bratwurst ideas, then don’t miss our posts for oven-baked brats, bratwurst in an air fryer, and pressure cooker bratwurst. Since my husband is German, being serious about bratwurst is important in our house.

First things first, when we’re talking about how long to boil brats, we’re actually going to be simmering or steaming the bratwurst on the stove, and not be cooking the sausage at a true hard boil. We’re referring to it as boiled brats since that’s how most people search for this type of cooking method.

Boiling brats before you put them on the grill or pan-frying them in a skillet is a popular method of preparing bratwurst.

Why to cook boiled brats instead of just cooking the brats raw:

Simmering brats plain or boiling brats in beer just need a few essential ingredients, brats themselves are already pre-seasoned so you don’t need to add additional flavor unless you plan to cook the bratwurst in beer or sauerkraut.

Our recipe tells you how to make one small batch of bratwurst, but feel free to double or triple the sausages! Bratwurst are always delicious when serving a crowd.

To cook the best possible brats, we highly recommend cooking them in beer, broth, or sauerkraut, but water works in a pinch if preferred. But trust me, brats cooked in beer helps to bring out the natural flavor of the sausage and will not overpower the taste at all. Even our kids love beer brats!

Getting fresh bratwurst from the butcher is the best way to go, but as far as pre-packaged brands we love a local brand called Hempler’s, or Johnsonville brats are good as far as national brands go. 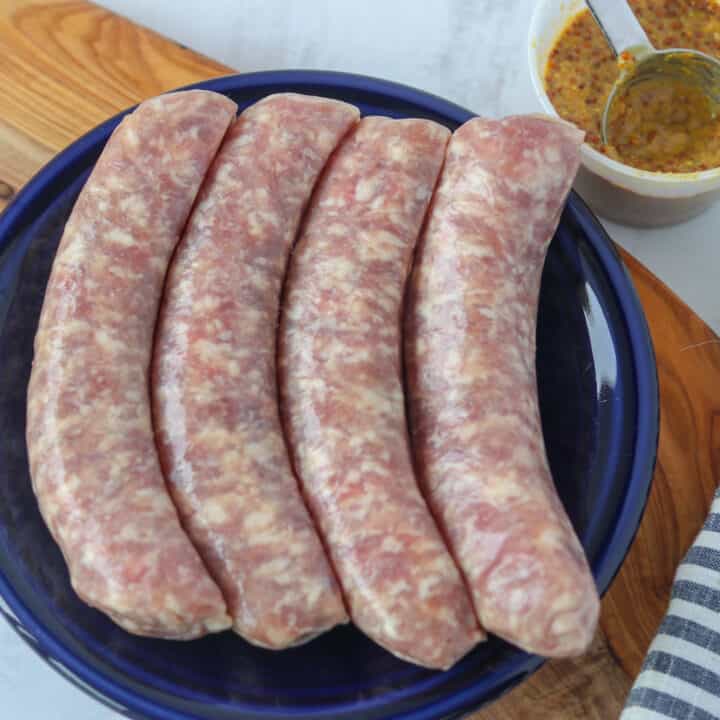 How to Boil the Brats

Making boiled brats in beer is super quick and easy, and they’re even better when they’re brats cooked in beer.

RECIPE TIP: This is essential to the success of your sausages, do NOT prick the bratwurst with a fork! This is just a bad tip circulating on the internet that causes loss of flavor and moisture to the bratwurst. 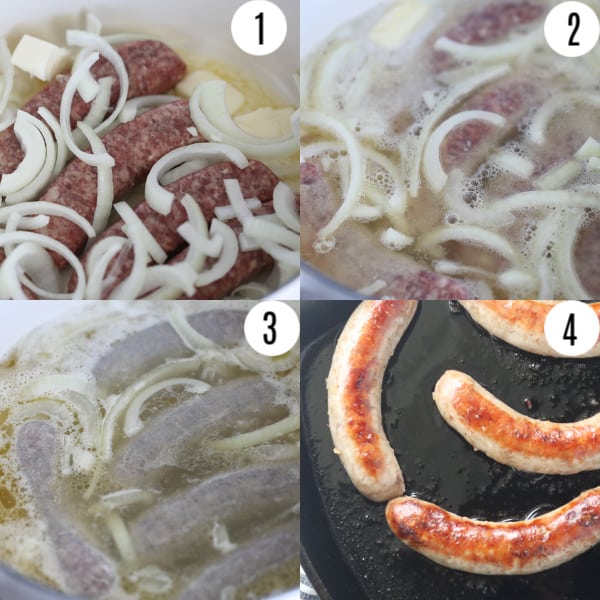 In a deep skillet or Dutch oven, add the raw bratwurst, 1 sliced onion, the beer (enough to cover the sausage), and 1/2 of a stick of butter cut into cubes. If there’s any beer left over after the brats are covered, then you should most definitely drink it while you’re cooking.

Bring the beer to a slow boil, turn down the heat to medium-low, and simmer the brats for 10 minutes. They’ll be par-boiled at this point, meaning partially (but mostly) cooked. They’ll finish cooking on the inside with the next step.

Remove the bratwurst from the liquid and either grill them on a preheated grill for 10-14 minutes until browned to your liking or pan fry them in a skillet with a little oil for 3 minutes on each side. The internal temperature should be at least 160F.

Can You Boil Frozen Brats?

Is it time to start cooking and you realized that you never took the bratwurst out of the freezer? Don’t fret, you can still boil frozen bratwurst and have them turn out delicious.

You’ll just want to add 5+ minutes to the cooking time of the recipe, so the bratwurst will take about 15-20 minutes to cook in the liquid.

How Long to Boil Brats Before Grilling?

So first things first, many bratwurst purists will claim boiling brats before grilling isn’t even necessary. It’s all a personal preference, in my opinion, so whether you grill raw brats or boil them first, I suggest you experiment with both techniques and answer that question for yourself.

You might be wondering how long to boil brats before grilling and if that changes the simmering time at all of the recipe. Instead of fully cooking the sausages, you could, in theory, parboil the brats before putting them on the grill. If you want partially cook the brats because you like dark charred brats on the grill, then it would work to reduce the beer boiling brats cooking time down to 10-12 minutes.

Brats are full of fat and flavor, and as long as you do NOT prick them with a fork, it’s pretty hard to overcook brats. While the ideal cooking temperature of bratwurst is 160F, brats are forgiving and if they end up accidentally being 170-180F, don’t worry, they’ll still taste delicious! 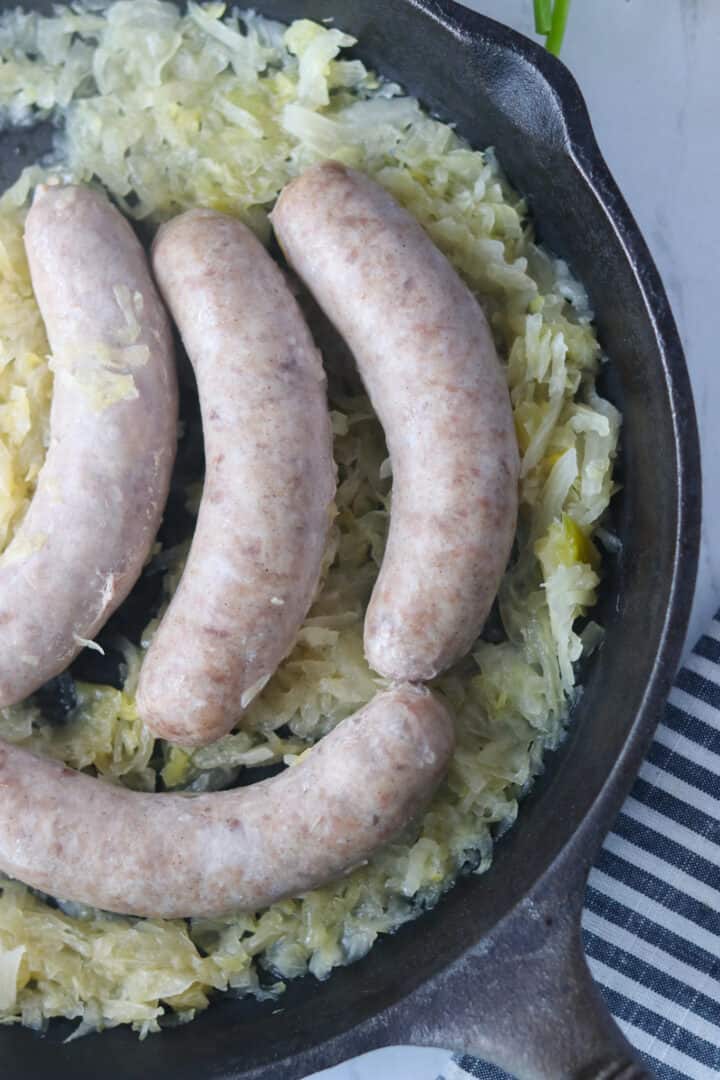 When you’re planning to boil brats with sauerkraut, you’re technically steaming or simmering them. Our steps are slightly different when we add kraut to the recipe. 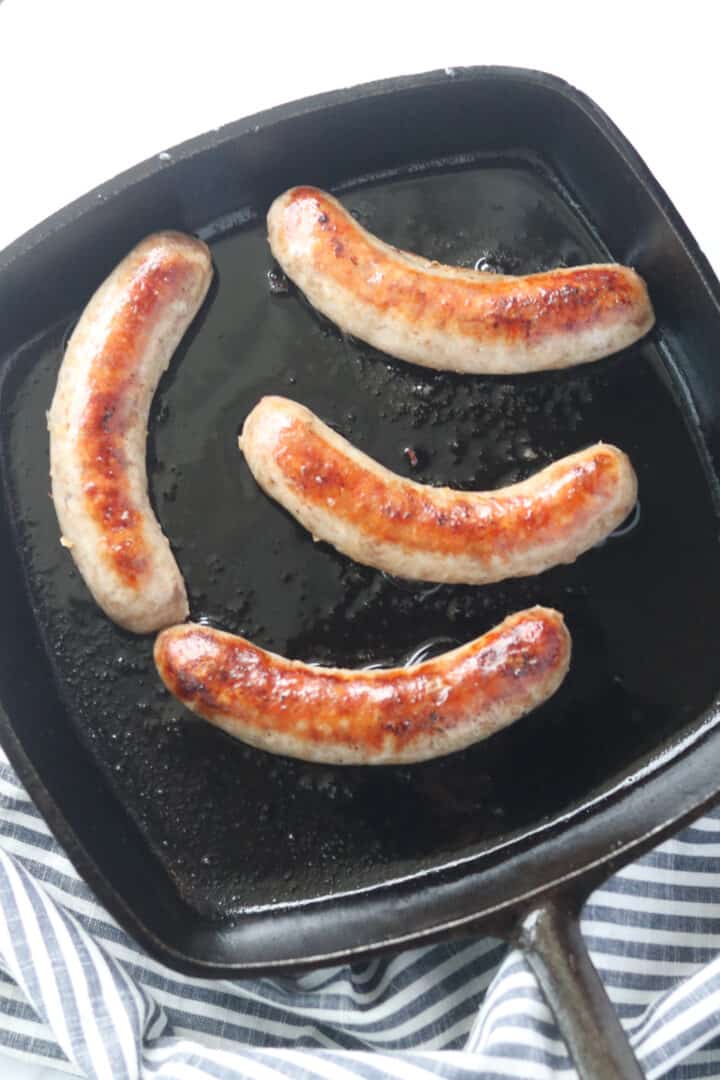 Are Brats Gluten Free or Keto?

Cutting out carbs and gluten seems to be super popular these days, whether it be for health reasons or food sensitivities. If you’re following a keto diet like my husband (who’s lost 30 lb so far!), wondering if brats are keto is a critical question.

Sausages such as bratwurst are pre-seasoned and some types of sausage such as kielbasa add gluten or sugar. The key is to check the labels before buying them to make sure no added surprise ingredients are in that brand.

Bratwurst by themselves (or with sauerkraut) are gluten free, but brats simmered in beer are NOT. Feel free to just cook the bratwurst in broth or water, and skip the beer.

But are beer boiled brats keto? Fortunately, there’s a handful of low carb beers on the market these days, and our favorite brand of beer to use when cooking bratwurst recipes is Michelob Light, which only has 2 net carbs per bottle.

Can I Double the Recipe?

By all means, feel free to double or triple the boiled brats recipe! It won’t change how long the brats get cooked in the beer, the cooking time should stay the same. You’ll of course need to double the butter and the onion, if desired. You might not need to double the beer since you’re just adding enough liquid to cover it.

Can I Boil Brats Without Beer?

If you’re here to learn how to steam or boil bratwurst before you plan to grill or pan fry them, but DON’T want to cook them in beer, here are a few alternatives!

And be sure to pin the recipe for later on Pinterest so you can easily get back to it!

Tap That Recipe Review Star! Be sure to leave a review after you make the boil brats recipe or just tap the star rating you’d give the recipe!

Show Us Those Photos! Be sure to upload your boiling brats in beer recipe photos on the Pinterest pin and/or tag us on Instagram at @wholelotta.yum! We LOVE featuring reader recipes!

Read more: how to cook barbecue chicken once chicken is boiled | Family Cuisine 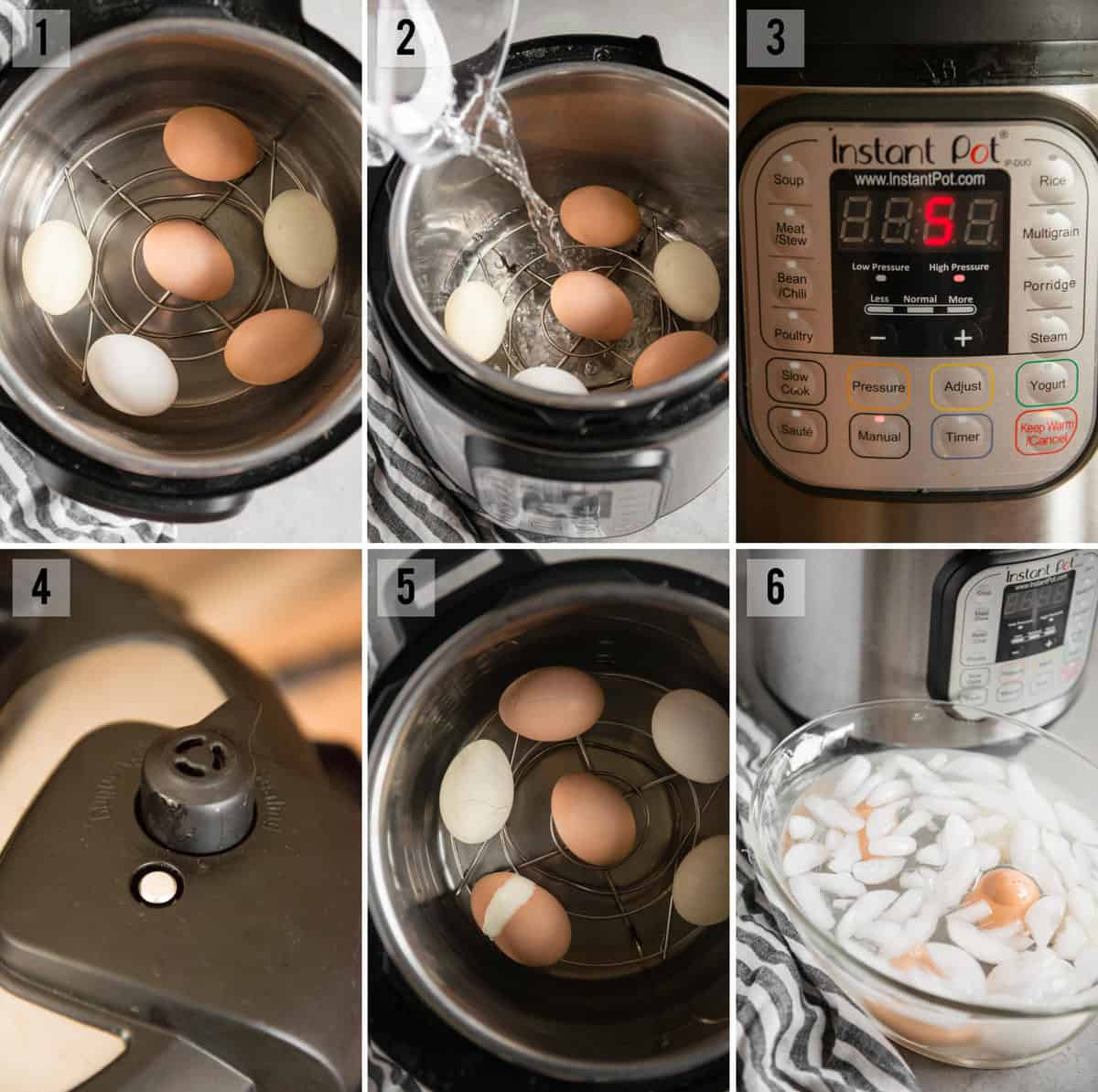