Home  »  Sauce  »  how to make a quick spaghetti sauce 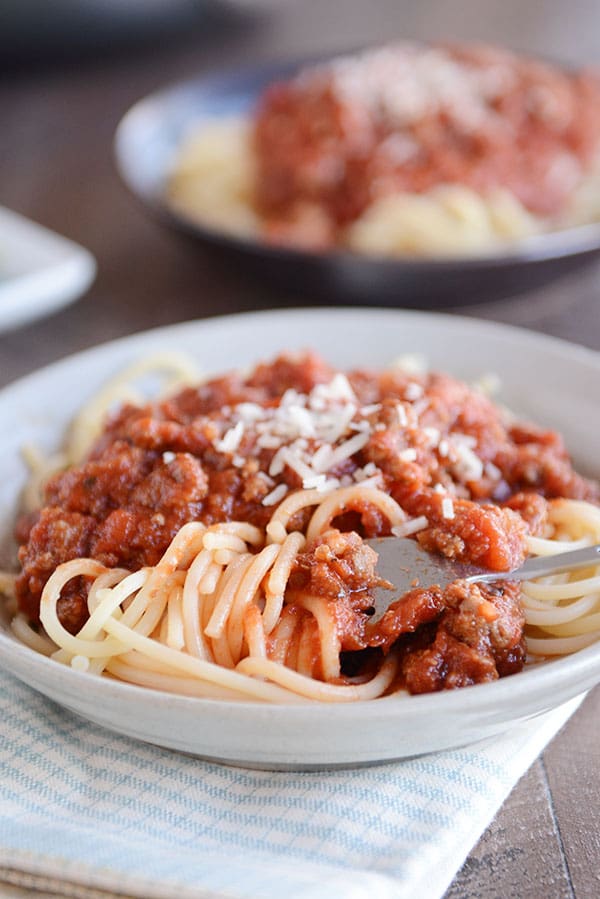 Well, what do you know? Miracles do exist!

Reading: how to make a quick spaghetti sauce

Two recipe posts during spring break week! I am rewarding myself for getting this post up and running by diving headfirst into my well-hid (I’ll never tell) stash of dark chocolate.

My kids decided to have an epic Lego building battle for a couple hours this afternoon, which worked in my favor.

So simple, this 20-minute quick homemade spaghetti sauce is the answer when you want rich and hearty, flavorful spaghetti sauce without having to plan hours (or days) in advance…

…or without opening a jar.

Now before you revolt and feel attacked, we all know there’s no shame in popping open a jar of store bought spaghetti sauce, but if you get excited about from-scratch versions that are almost as easy as prepackaged, this recipe is for you. And me. 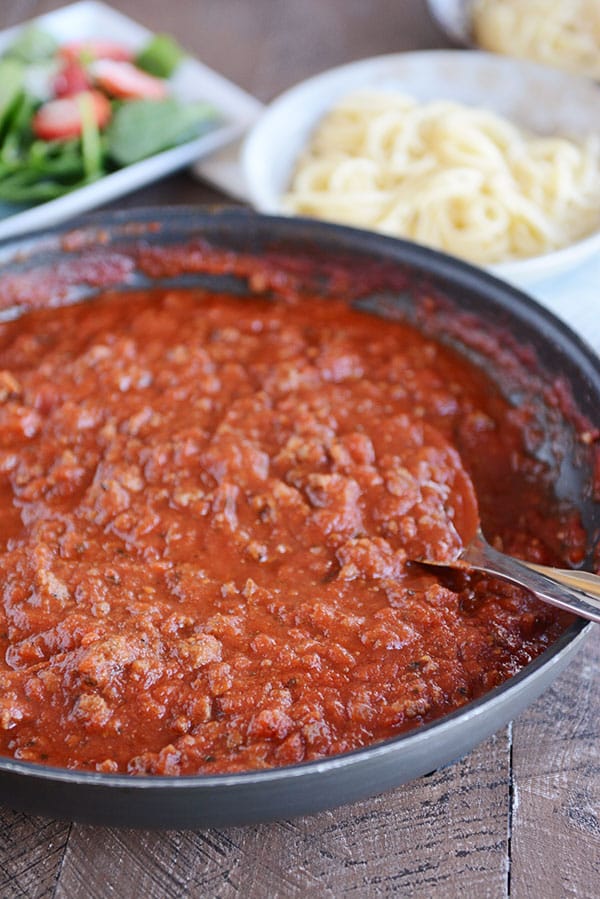 Hundreds of you have made it and loved it and saved the recipe to your forever files. It is hands down the best homemade spaghetti sauce ever.

It makes a lot, so I often freeze half of the batch, which makes for an exceptionally quick weeknight dinner. While the noodles boil, the sauce can be thawed and reheated.

But sometimes, there is no leftover frozen spaghetti sauce to be found. Nor do I have an hour or so to get it started and let it simmer.

That is when this killer quick homemade spaghetti sauce version jumps in to save the day.

Not only is it amazingly delicious, it is also a fabulous dinner solution for a crazy weeknight when you just need a healthy, tasty, filling dinner on the table fast.

Rich and hearty, there are a few key ingredients in this simple, weeknight spaghetti sauce that help replicate the flavor of a low and slow, long-simmered sauce.

Any idea what they are? 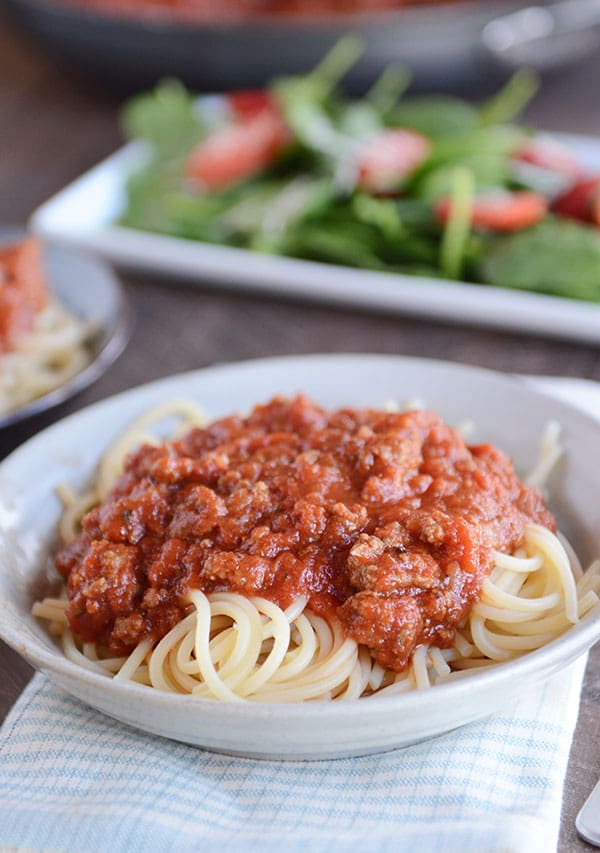 First, tomato paste! The concentrated flavor of tomato paste adds a depth of flavor quickly without the need for special ingredients or longer cooking time.

I know it’s slightly annoying to open a can of tomato paste only to use a few tablespoons, so let me offer you two solutions:

2) Buy tomato paste in the squeezable tubes (kind of like toothpaste!); they are popping up in most stores these days and revolutionize using a tablespoon or two of tomato paste at a time.

Here’s a visual if you’ve never seen them before.

The second key ingredient might be a little surprising, but I promise it works: soy sauce.

You don’t need a lot – just a tablespoon, but that little dash of complexity does wonders for the overall flavor of this quick homemade spaghetti sauce. 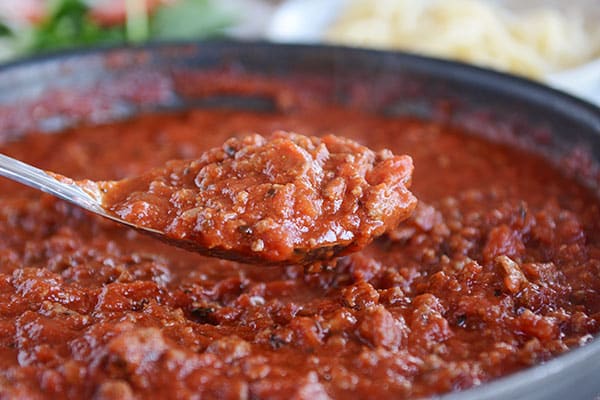 The real test of success for this sauce was when I made it a while ago but didn’t tell anyone in my family it was the fast and furious version instead of our longtime favorite homemade version.

While eating, one of the boys said: “I love mom’s spaghetti sauce” and Brian said “yep, there’s nothing that can beat it.”

I sat there beaming (trying to ignore the one child at the end of the table who was gagging on the Instant Pot brussels sprouts accompanying dinner).

I almost didn’t have the heart to tell everyone that I had kind of tricked them – subbing in this quick homemade spaghetti sauce for our beloved go-to spaghetti sauce. 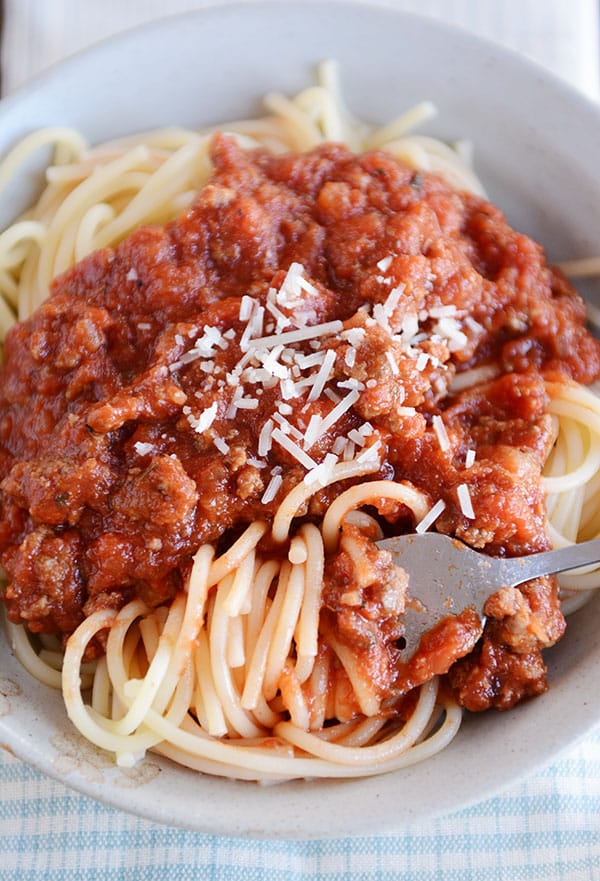 I’m sure in a side-by-side taste test, they’d be able to pick out the long standing favorite, but we clearly love this weeknight version enough to make it over and over and over.

This week, during spring break, each of the boys have a night they are assigned to make dinner by themselves. When deciding the menu, they were arm wrestling over who got to make this easy homemade spaghetti sauce for their night.

In the end, we may enjoy it five days in a row just to keep the peace.

P.S. It kind of goes without saying that the Asiago bubble bread from earlier this week served with this spaghetti would be straight up phenomenal. #embracethecarbs