Boil and parboil potatoes like a pro! These tips and tricks will ensure you get the perfect boiled potato every time!

Click here to jump down to the Potato Boiling Times Chart.

Boiling potatoes is an essential step when making dishes such as potato salad, mashed potatoes, fries or simple side dishes. Not only are they delicious side dishes, but boiled potatoes are also quick and easy to make.

The perfect boiled potato is easily achievable with a few helpful hints and tricks!

What Potatoes to Use?

The type of potato you use will depend on what you are going to use the boiled potato for. Some potatoes are better in potato salads, while others are best used for mashing. There are three main types of potatoes you need to know, but make sure you also check out this post that shares more about the different types of potatoes you’ll want to use for popular recipes.

Also read: how to make mac and cheese boiled in milk | Family Cuisine

If cubing your potatoes, make sure they are cut to size as evenly as possible. This will ensure a consistent cooking time.

If you are cooking your potatoes whole, aim to have potatoes that are also evenly-sized. If some are smaller, you may have to remove them sooner because they cook quicker.

Skin On or Off?

You can do either! As long as you’ve cleaned your potatoes thoroughly, it’s a personal preference. Boiling potatoes with the skin on, however, will help keep the potatoes together better.

Just note that it’s easier to remove the skin post cooking while the potatoes are still hot. 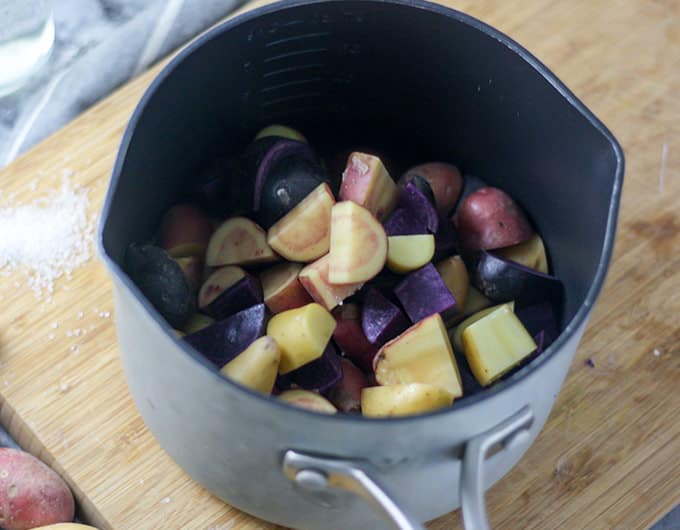 How to Boil Potatoes

Now down to the nitty gritty!

How Long to Boil Potatoes

If the potatoes are whole, it’s not easy to give an exact amount of time. It depends on the size and type of the potato. However, here are some guidelines…

Once you’ve combined the potatoes with cold water and added salt and brought it all up to a boil while covered, and then you have dropped the temperature down to a simmer and have the pot uncovered, this is how long to cook the potatoes for:

Parboiling potatoes is the process of partially boiling your potatoes before cooking them again for a second time. There are many advantages to this method, such as evenly cooking the potato and decreased cooking time.

To parboil potatoes, follow the same instructions for fully boiling potatoes, however, reduce cooking time. Your potatoes should not be cooked the whole way through. When testing potatoes, there should be a little resistance with the fork when you pierce the potato.

Once parboiled to the desired doneness, cool your potatoes down entirely to stop the cooking process. I place my potatoes on a baking tray and place them in the freezer to cool. You can alternately drain them and fill the pot with cold water.

Once they’re cooled down, go ahead and use them as you normally would. For example, toss them in olive oil, salt and pepper and roast them for the most beautiful crunchy roasted potatoes.

Top 10+ rice and chicken near me

Top 20+ how to make lemon rice