Many of you are not new to Shandong’s lu (鲁) cuisine. If you have tried my Braised Glass Noodle with Pork and Napa Cabbage, for example, you have already had it! During college, Sarah spent a summer in Qingdao, the capital of Shandong province, for a Chinese language program at Qingdao University.

Some of her fondest memories from that summer involved food (I’m sure that surprises no one). She couldn’t believe how cheap and good everything was! She told me that every time a bunch of students from the program would go out to eat, they would always order Di San Xian along with rice and a perhaps a simple egg and tomato stir-fry.

The traditional way of cooking this dish is to fry all three vegetables and then toss them together in a sauce at the end. The official name for this technique is called “走油, zou-you” which translates to “walk the oil.” Instead of deep-frying, I browned the vegetables using a shallow-fry technique. I also decided to brown the eggplant last, because eggplant tends to sponge up way too much oil if you let it.

For some of you who are familiar with this dish, the traditional colors are purple (eggplant), yellow (potato), and green (green bell pepper), but I decided to use red and yellow bell peppers to jazz up the colors even more. (Okay, the truth is that I didn’t have green bell peppers on hand). If you grew up eating this dish, don’t let the colors throw you off!

This dish is vegan, and with the vegetables in your gardens reaching maturity, I think this recipe is quite timely. Odds are, it has your name all over it! Just remember that the cooking times for these three vegetable are different: the potato takes the longest, and the pepper the shortest amount of time. Follow the cooking steps as written, and I promise, it will become your new favorite! 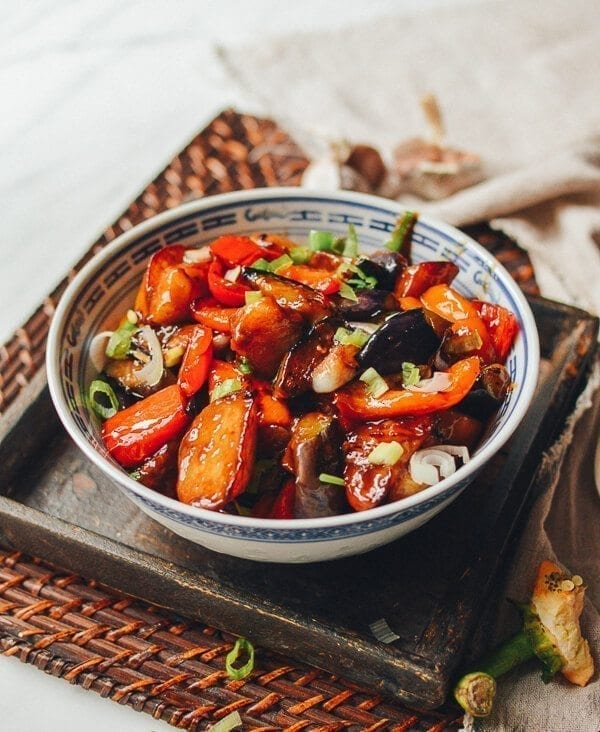 First let’s prepare the following: smash and peel the garlic, chop the scallions, and mix the cornstarch with the water in a small bowl. Set everything aside.

Then wash and wipe all the vegetables dry using a clean kitchen towel (this is key!) before cutting them into large bite-sized pieces. Don’t let the cut potato and eggplants sit for too long before cooking, because they will oxidize and become discolored.

Now we’re ready to cook this Di San Xian stir fry. Heat the oil in your wok over medium heat. Add the potato, and brown lightly for about 8 minutes until cooked through. Stir occasionally to avoid burning them. 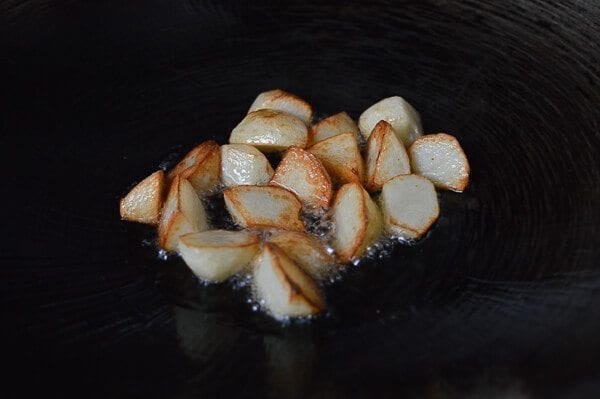 Now add the bell peppers, and stir-fry for another minute. Transfer everything to a dish and set aside. 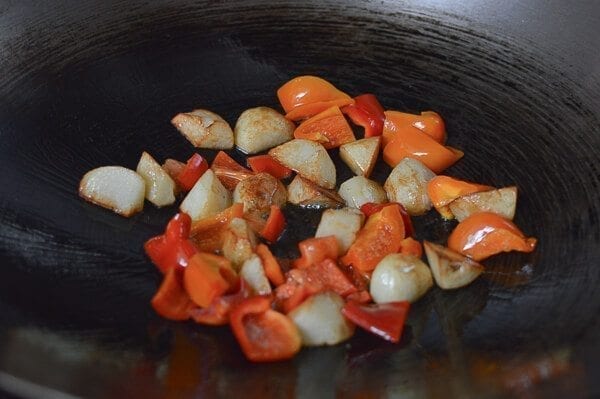 There should be oil left in the wok. Add the eggplant and brown slightly. I learned this technique from Bill: spread the eggplant pieces into a single layer, cover the lid for a minute, uncover, stir the eggplant to avoid burning, then repeat. Do this 2-3 times until the eggplant is cooked through. Transfer to a dish. 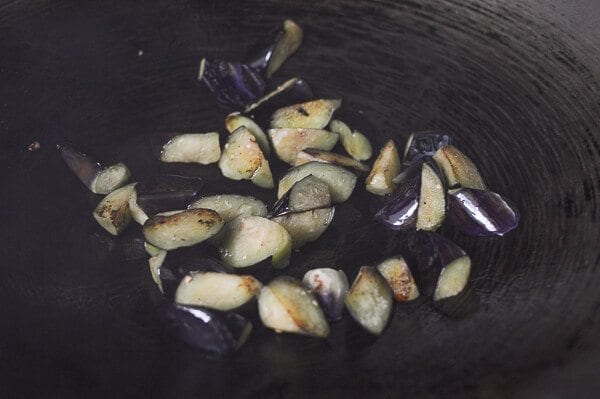 Add a bit of oil if the wok is very dry at this point. In my case, the wok was still well-oiled, so I didn’t need additional oil. Add the garlic, cook it for a few seconds, and add all the vegetables back to the wok.

Read more: how to stir fry beef and keep it tender | Family Cuisine 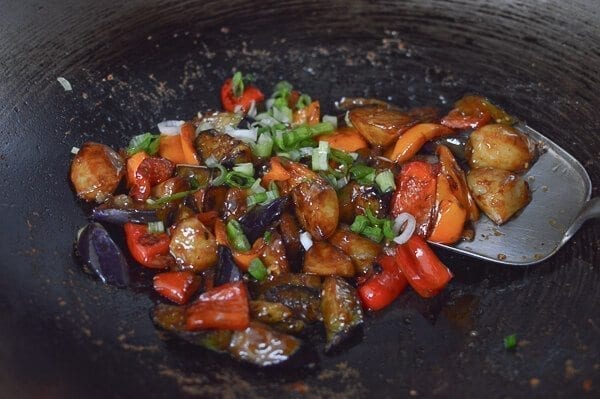 Stir a couple of times to coat the vegetables with sauce, add salt to taste, and you’re ready to serve! 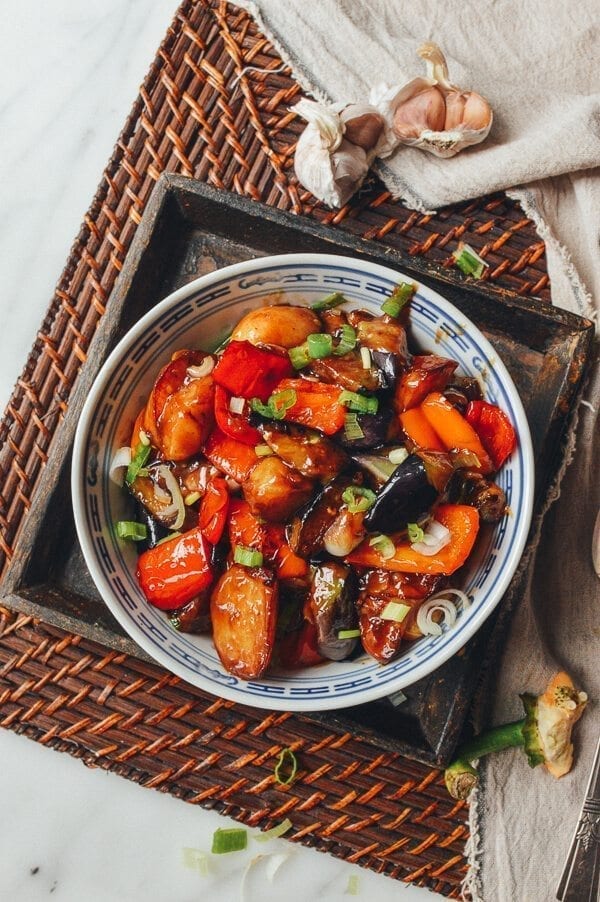 Serve your Di San Xian as a vegetable side dish or as a vegetarian main course with lots of rice! 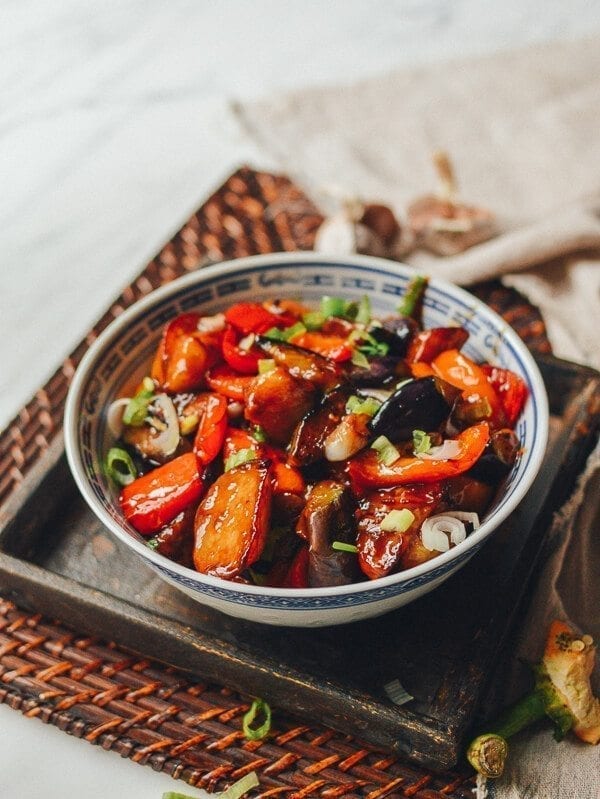