how to make fried chicken without eggs | Family Cuisine

Real Simple Fried Chicken – My simplest and most authentic recipe for real southern fried chicken. Quick and easy for a family dinner or special occasion.

When I get into the frame of mind to go back to my culinary roots, I always go to recipes that are representative of what I call southern farmhouse cooking. I’ve been cooking southern food since I was big enough to reach the stove, so it’s where I feel most comfortable. And what’s more southern than fried chicken?

It’s a standard. It’s a staple. And, most of all it’s quick and easy. Yes, I said “quick and easy.” Making my Real Simple Fried Chicken is not a production.

Fried Chicken Should Be Quick and Easy

Making good, simple fried chicken does not require overnight marinades or special equipment or any kind of fancy preparation whatsoever. If it did, do you think millions of southern women would have cooked it for lunch every day for years and years?

I can tell you without hesitation that they would not have. For our southern grandmothers, it was something they could whip up in a few minutes.

I’ve seen the recipes and the demonstrations where chefs put the chicken in milk or buttermilk or yogurt and let it stand overnight in the refrigerator. Then they coat it in all kinds of seasonings and shake it all up together in a paper bag.

Well, that’s fine if you want to do that, but what you typically get from it is a big mass of fried flour with a little bit of chicken in the middle of it.

The Best Chicken for the Recipe

The very best fried chicken is made with a chicken that weighs about 3 pounds. That’s pretty hard to find in today’s supermarkets especially when chickens have been bred for more breast meat thereby causing them to weigh more.

Try to at least find the lightest weight bird in the case. If you have the skill to do so, buy a whole chicken and cut it up yourself. You’ll save lots of money. I, unfortunately, do not have that particular skill. Wish I did. I’ve tried. I’ve tried a lot.

Here’s how I (and millions of southern women before me) make really simple fried chicken.

This is very simple fried chicken without eggs, without buttermilk, or any of that other stuff. This is the way all the home cooks I knew when I was growing up made fried chicken. It’s quick and it’s easy.

STEP ONE: Thoroughly dry all the chicken pieces and place them in a single layer in a pan.

STEP TWO: Liberally salt and pepper the chicken pieces on both sides. Be very generous with the pepper. The taste of black pepper is very important to authentic southern fried chicken.

If you want to sneak in some other seasonings, this is the time to do that. It’s completely not necessary, but sometimes we like to change things up, don’t we? I’ll occasionally sprinkle on some Lawry’s seasoning salt or some Jane’s Crazy Mixed-Up Salt. Whatever floats your boat. But if you’re a purist, you’ll stick with just salt and pepper.

STEP THREE: Sprinkle all the flour over the chicken in the pan and toss the chicken to coat it well with flour.

We’re talking about “dredging” here, not lightly flouring. That’s why you pour the flour over and toss the chicken in it rather than doing the shake-it-up in the bag thing. You want a good coating of flour.

What we’re doing is pan frying, not deep frying. You need enough oil to come about halfway up the pieces of chicken, but not so much that it will spill over when you place the chicken in the pan.

STEP FIVE: Place the chicken pieces, skin side down in the hot oil. Cook for approximately 10 minutes or until the skin is pale golden brown.

STEP SIX: Turn the chicken over and cook for 10 minutes on the second side.

STEP SEVEN: Turn the chicken pieces once more, reduce the heat to medium-low, cover and cook approximately 10-15 minutes or until chicken is cooked through.

STEP EIGHT: Remove the hot chicken to a paper towel-lined plate and allow it to drain for about 5 minutes.

Use the Right Pan and Oil

Using a well-seasoned iron skillet makes a huge difference in the taste of your chicken. There’s just something about a great iron skillet that you can’t get from any other piece of kitchen equipment.

Also read: how to make fried chicken in the deep fryer | Family Cuisine

Also, I recommend using peanut oil because it will withstand higher temperatures for a longer time without burning than other oils.

Experts will tell you that your oil should be 375 degrees before frying and to try to maintain that temperature during the cooking. I learned to cook before everyone had kitchen thermometers, so I judge it my own way. My little trick to test whether the oil is hot enough to cook – Place the end of a wooden spoon in the skillet. If the oil bubbles around the handle, it’s hot enough.

Serve your fried chicken with something equally delicious and southern like potato salad, fried okra, and green beans. And don’t forget the sweet tea!

If you have any leftovers, you can keep them in the refrigerator for a day or two. You can reheat them in a 250 degree oven for about 15 minutes or, even better, just let it come to room temperature and enjoy it without any heating at all.

If you try this method once, I’ll bet you won’t go back to all that complicated marinating and shaking. It’ll be the crispiest, most flavorful chicken you’ve cooked in a long time or my name isn’t Nana.

I’m not making any kind of promises about what the clean up is like, however.

Have you tried this recipe? I’d love for you to give it a star ⭐️⭐️⭐️⭐️⭐️ rating in the recipe card and/or in the comments section further familycuisine.net can always stay in touch on social media by following me on Facebook, Instagram, or Pinterest and Sign Up to Get my Newsletter, too! 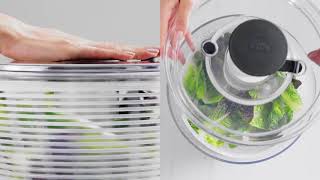 Top 10+ what is a salad spinner

Here are the best information about what is a salad spinner voted by users and edited by familycuisine.net, let’s find out with us