These white steamed buns with meat filling called siopao has evolved into a more creative kind of siopao. The toasted or baked siopao and the fried siopao. Before, I was a little confused about those two. I thought they are the same but when I made a little research, they are very different. The fried siopao is fried, not baked. Fried siopao is steamed first then fried using a greased skillet. It is not deep fried, just searing the bottom side until it becomes brown. It’s up to you if you want the top side fried too. On the other hand, toasted siopao is baked directly in the oven without steaming. So when it is cooked, the texture is similar to bread with meat fillings. It reminds me of an asado roll.

To make the siopao dough; In a small bowl, mix yeast, sugar and water. Set aside for at least 5 minutes. Sift the flour in a mixing bowl. Then add yeast and evaporated milk then stir the mixture. Then add the softdrinks on the mixture while stirring. When mixture becomes stiff and formed into a dough, put some flour on the kneading board to prevent the dough from sticking. Press and fold the dough a few times to make it smooth. Then form it into a ball and put it in a large greased bowl. Cover it with a moist towel and let it rise for an hour. To see the rest of the recipe with the exact measurement of ingredients, continue reading.

Reading: how to make fried siopao 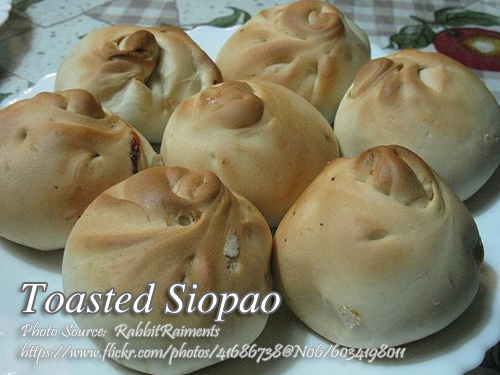