Move over tomato sauce! Pasta with buttered sour cream and bacon is in town, and the pasta is calling! Try this for your next pasta supper and get ready to be dishing out seconds. 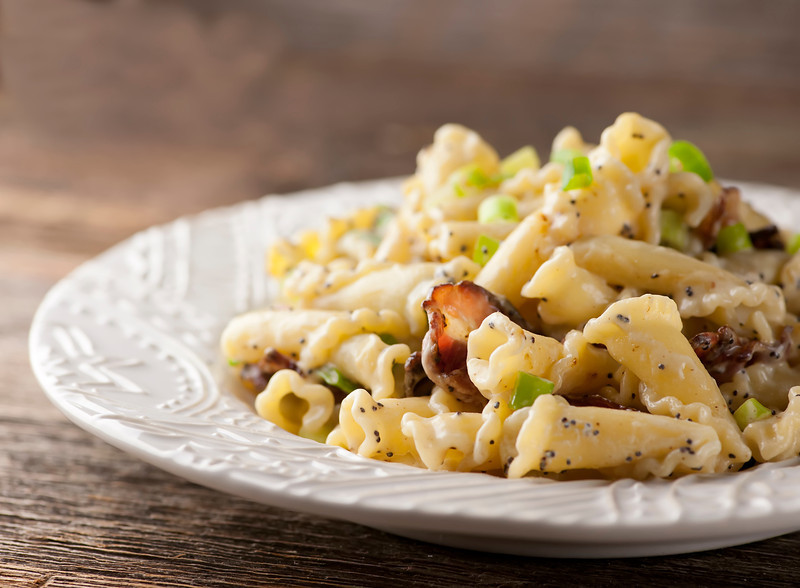 Reading: how to make pasta sauce with sour cream

Sometimes when you are contemplating the inside of your refrigerator wondering what to make for supper, wonderful things can happen. This was the case when I was contemplating the inside of my own fridge, gazing at the remains of a container of sour cream, the last couple of scallions in the bunch, a stick of butter and of course, the package of bacon that is always in there.

What happened next was pasta with a buttered sour cream and bacon sauce that is going into permanent rotation in our house!

As the idea was forming in my head, I also realized I had a burning desire to use some of the poppy seeds I discovered in my spice cabinet (now a glorious spice drawer) when we were redoing the kitchen, so they went into the mix as well. And as offbeat as this combo sounds…it WORKED.

Sweet butter, salty bacon, tangy sour cream, a little bite courtesy of the scallions, and the I-don’t-know-quite-how-to-describe-it taste of the poppy seeds.

I used campagnelle pasta because I wanted the nice round shape to grab every drop of that sauce, but penne or ziti will work just as well.

Here’s How To Make Pasta with Buttered Sour Cream and Bacon!

Make sure your sour cream and your butter are at room temperature, and cook up your bacon until it is crispy. Cook the pasta and drain it, and then put it right back into the hot pasta pot.

Now stir in the butter and the sour cream both at the same time until they are all melted and mixed together with your pasta. Stir in the bacon, scallions and poppy seeds…and that’s it! That’s all there is to it.

I dished mine into warmed plates, and for the next little while the only sound in our house was “Mmmmmmmm.” Creamy, dreamy, tangy pasta deliciousness.

Which among other things just goes to show that all that time we’ve spent gazing into fridges does eventually pay off in the end!