Learn how to make the easiest refrigerator dill pickles! These are garlicky, salty, and crisp, and are the perfect addition to a picnic. 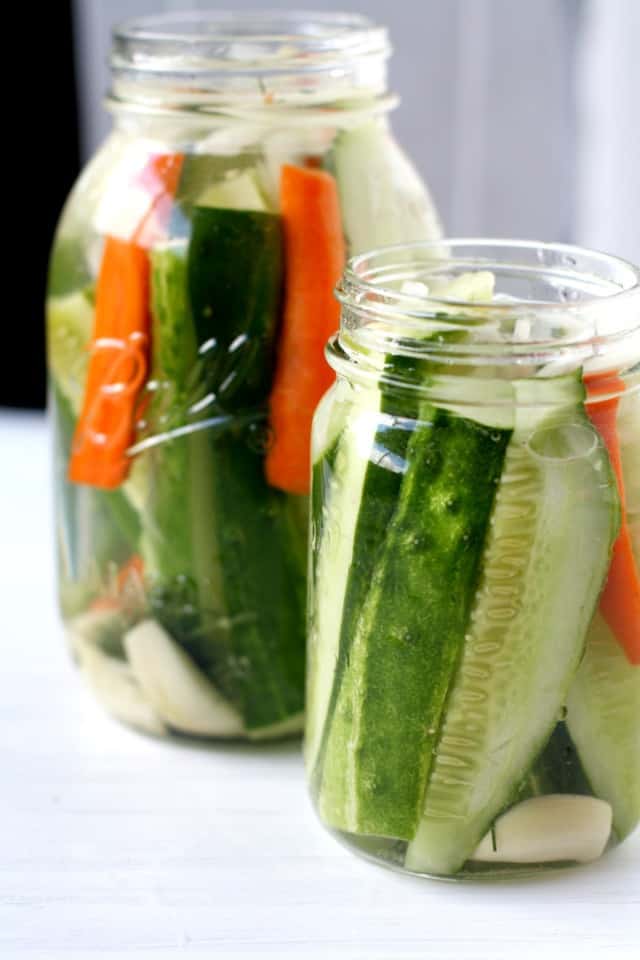 Dill pickles are one of my favorite things to have on hand. I love the salty, cold, garlicky, crisp crunch of a refrigerator dill.

In the summer, we love to make refrigerator dill pickles often. They are so easy to make, and we’re always so happy to have a full stock of them in our refrigerator.

I’ve been making refrigerator sweet pickles for years, and we love them. Then we decided we had to try to make our own zesty dills. Thankfully, it was just as easy as making the sweet version!

I started with Annie’s recipe, and added a few things to make them zestier. I also like to add onions and carrots for a little color, and for another way to use up some summer produce. 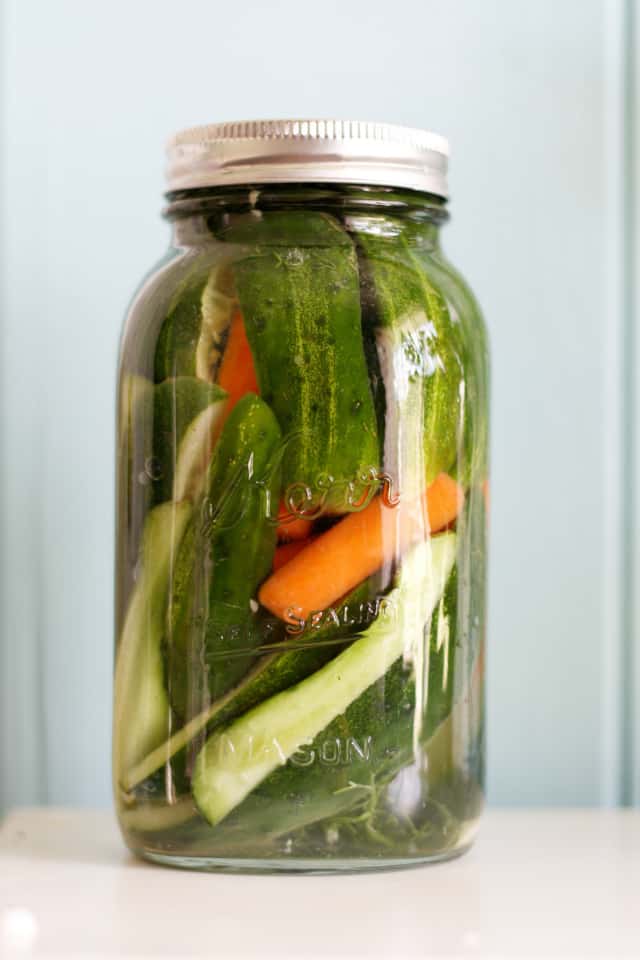 How long do you have to wait for refrigerator dill pickles?

You can eat them after two days. They will get more flavorful if you let them sit in the fridge for a few extra days before opening.

How long can you keep refrigerator pickles?

Since they aren’t canned, refrigerator pickles aren’t going to last forever. You should be able to store them in the refrigerator for about 2-3 weeks before they start to get a little soft. Of course, ours don’t last that long, so we don’t usually have that problem! 🙂

Note: Since these are not canned, they are not shelf stable. These pickles do have to be stored in the refrigerator. 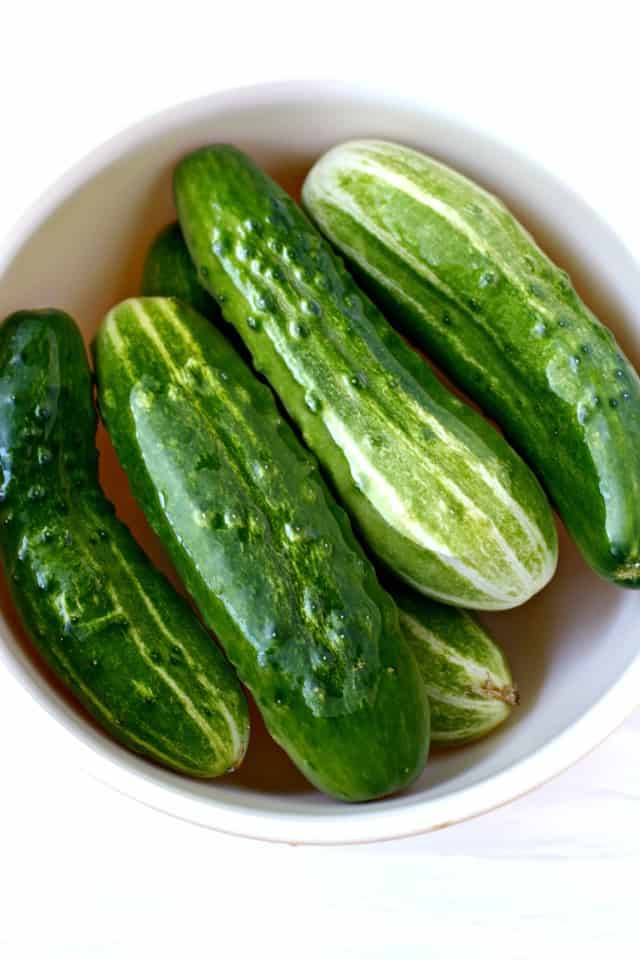 Can you make pickles with English cucumbers?

We’ve tried this before, and it wasn’t that successful for us. The pickles were too soft. Pickling cucumbers are the best choice to get that nice crisp, crunch when you bite into them! We’ve also used regular cucumbers, and although they weren’t as soft as the English cukes, they were still a little too soft.

How do you make refrigerator dill pickles? 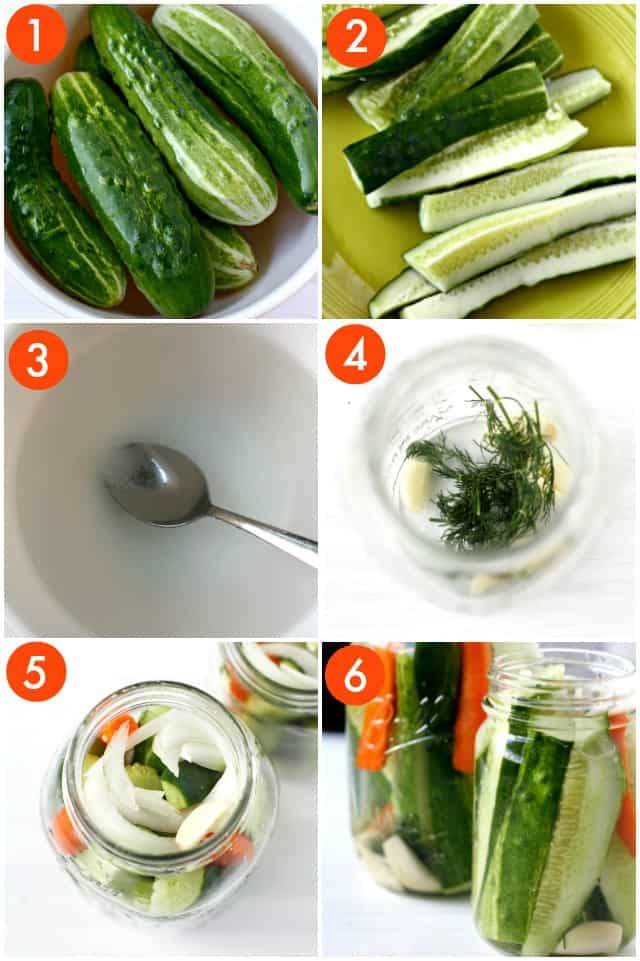 What if my pickles are too salty?

I’ve had this happen to me, it’s the worst! The first rule of thumb is to taste the brine before pouring over the pickles. Make sure it’s not crazy salty before you cover the cucumbers with it.

Make sure that you use coarse Kosher salt, NOT sea salt. Sea salt will make these super salty.

If you’ve already made the pickles, and they are too salty, you can try shaking the jar, pouring out half the brine, and adding more plain water. Refrigerate and try them again the next day. This should help the situation, but depending on how bad they are, you might not be able to salvage them.

Watch the video below to learn how to make refrigerator dill pickles: 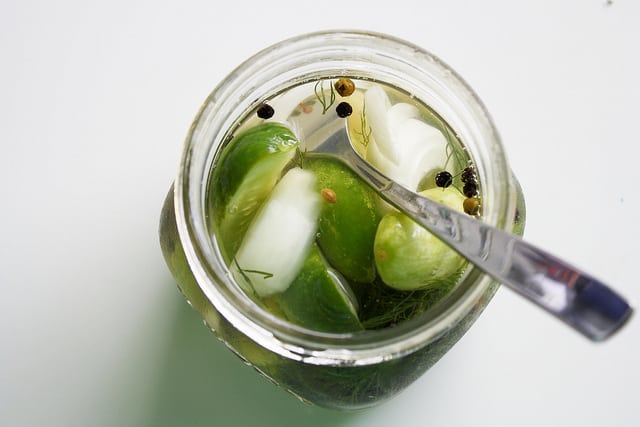 I think you’ll love serving these pickles at your next potluck or barbecue! Try serving them alongside these lentil Sloppy Joes and this easy vegan potato salad. 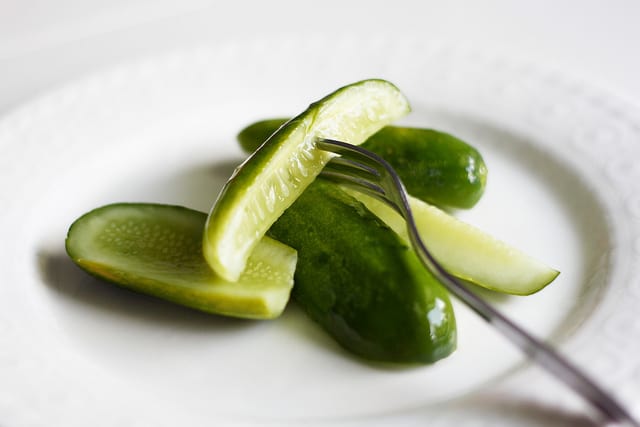 This post was originally published in September 2013. It has been updated with new photos and more tips.