These Russian Dill Pickles are deliciously crunchy and refreshing. Perfect to accompany a sandwich or your favourite bbq meal! Really easy and quck to make in just 2 days. No canning required!

Reading: how to make russian pickles

This post contains amazon affiliate links which means if you make a purchase after clicking the link, I will make a small commission.

These Quick Russian Dill Pickles aren’t just another recipe, they are rooted in my childhood and ingrained in my memories. I couldn’t just write about the recipe without remembering. Feel free to skip all my musings and Jump to Recipe.

Sweet and savoury preserves have a special place in Russian cuisine and culture. For centuries preserving summer produce was a necessity to survive long and cold winters. The geography of the country led to a plethora of vegetables, mushrooms, fruits and berries that only grew for a few short months and then needed saving.

Russian-style sweet preserves are different from their Western counterparts. The jams, varenye, are often made with whole fruit suspended in beautiful jewel-coloured syrup. Even pinecones are preserved and made into jams and enjoyed throughout cold months.

Russian pickles in most cases don’t use vinegar or too many spices and usually rely on lacto-fermentation and live bacteria to produce their characteristic sour flavour.

With the advent of refrigeration and the beginning of easy import and export, the art of pickling started to die down in the 20th century. There was no need to preserve the vegetables not in season. A trip to a local supermarket would result in a few kinds of cucumbers and tomatoes, albeit not as flavourful, even in the dead of winter.

Soviet Union, however, separated from the world by the Iron Curtain had a resurgence of pickling. The absence of food on the shelves made the pickles once again a necessity to provide just a few vitamins and nutrients in the winter. Popularities of Dachas, summer homes or cottages, that were given to people by the government, meant that people spent months growing food in the summer, foraging in the forest, and preserving just to have food on the table later in the year.

My experience with all things preserved and pickled is not of absence but of abundance.

Like many Soviets, my grandparents also had a Dacha. Our cottage land was a traditional 600 square meters (or 6,500 sq feet). Every square inch was filled by a flower or a plant. And in the middle of the plot, there was a beautiful two-story summer house with two bedrooms, one dining and kitchen area and a second floor with another bedroom.

The rules of that time meant that the house could not be winterized. It was not allowed to have a washroom, plumbing, or running water either. Every year my grandpa would show me the blueprints of the house he wanted to built but was not allowed. Every year he would tell me a story of frantically packing tons of sand around the base of the house to artificially make it less tall for the inspection. His efforts helped and the second floor was actually tall enough that people could stand in it. That was also not allowed back then.

My grandparents lived for that small piece of land. They spent winters making plans for what to plant and where to plant it. Changing it every year to make sure that they could efficiently grow as many vegetables and fruits and berries as they could. Bartering for new seeds and flower bulbs and stalks of different types of vegetables and flowers. Tending to the seedlings in the spring, dreaming, waiting.

I spent summers at the cottage and even now, years and years later, memories made there are some of the most vibrant from my childhood.

Grandma woke up at sunrise and spent hours before the sun got high and hot watering the plants, weeding, picking bugs and caterpillars off leaves. Midday was spent cooking and preserving.

I was always allowed in the kitchen but never asked to help. I sat at the dining table, drawing, reading, playing, and watching from the corner of my eyes as grandparents pickled and canned. The house, surrounded by fruit trees and their shade, yet hot from the scorching sun and the steam of boiling water for canning, was filled with the characteristic aromas of salt brine and dill.

Grandma cleaned, cut, and measured. Grandpa brought water from the well and carried jars into the cellar for fermenting.

I know now that all those summer pickles and jams were made just so that I could have fruits and vegetables in the winter. I know it was done because there was absence of food in the stores. Yet, for child-me, it didn’t feel that way. I did not miss fresh cucumbers in December. Instead, I longed to eat those pickles made months earlier in August. I experienced the abundance of produce in the summer and abundance of love and care from my grandparents.

Now, decades later, Dacha is a distant, yet eerily clear, memory. My grandparents died a few years ago and I miss them every day but never more than in the summer, when I pick black currant leaves to make my own Russian Dill Pickles from the recipe written by my grandma’s hand. When I smell the dill in the brine. When I bite into that perfect lightly salted cucumber and hear the crunch. 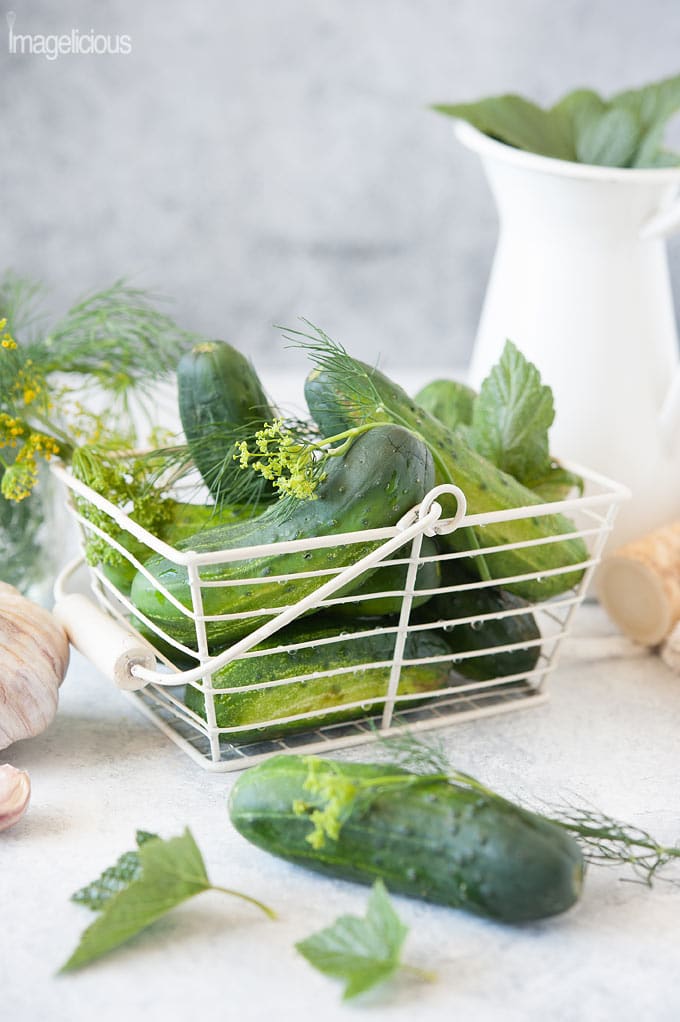 There are different ways of lacto-fermenting vegetables and all of them are popular enough that they each have a different name in Russian. We don’t just pickle vegetables. We also pickle fruits.

There’s usually a very low salt to water ratio for the brine but pickled fruits like that can also last for a long time. Pickled apples are a childhood favourite. Pickled watermelon is still something I can’t get on board with.

My Canadian husband loves telling a story about his first visit to a Russian restaurant with me. The table, as tradition dictates, was filled with dozens of dishes of appetizers, zakuski: herrings, salads, blini, caviar, cheese, deli. In the middle there was a big platter of beautiful fruit: slices of watermelon, small apples, bunches of grapes.

Lacto-fermenting summer crunchy cucumbers turns their flavour beautifully sour and intense. Those pickles are often canned and preserved at the height of the summer. They are usually ready to eat 2 to 3 months later.

And if canning is mostly something that is done at a cottage, making Quick Russian Dill Pickles is a very common affair for most Russian facilities. The direct translation of the name is Low-Salted Cucumbers. I’ve seen recipes that refer to them as Half-Sour Pickles also.

These Russian Dill Pickles are deliciously crunchy and refreshing. Surprisingly, a cold half-sour pickle on a hot day quenches thirst. They are perfect to accompany a sandwich or your favourite bbq meal!

They are also very quick to make and require no canning, making them great for cooks of any level.

Making Quick Russian Dill Pickles is very easy. It requires no special equipment or fancy ingredients. There are a couple of ingredients that make the pickles a bit extra special but they are optional.

To make Low-Salted Russian Dill Pickles you need to pack small cucumbers in a jar with garlic and flowering dill and cover with a salt solution (brine). Let the cucumbers ferment on the counter for two days. They will be done after 48 hours. Then just keep the jar in the fridge. Easy!

Don’t forget to watch the video where I explain all the details on how to make these delicious Quick Russian Dill Pickles!! 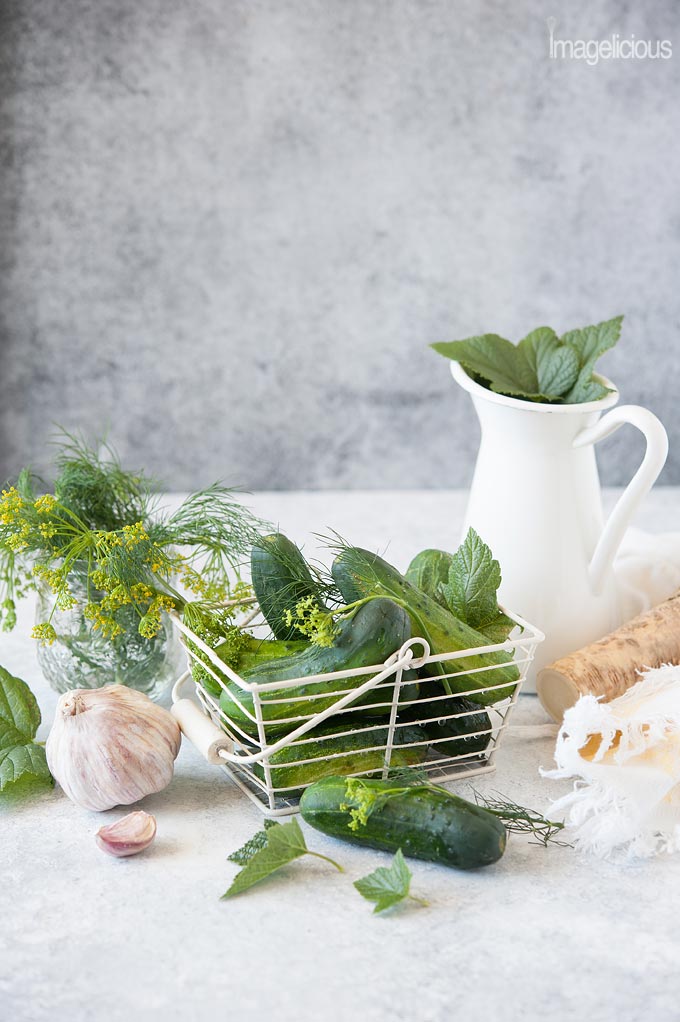 Ingredients and substitutions for the Russian Dill Pickles

There are tons of recipes for the Half-Sour Pickles with dozens of variations in the amount of salt or the actual ingredients. This Russian Dill Pickles Recipe is the one that my grandma used all my life so I grew up with it and it is my favourite:

I have seen recipes that use any kind of cucumbers including English or Turkish Cucumbers but I haven’t tried them. My guess that any old cucumber would work but I prefer the summer bumpy ones.

If long English cucumbers are the only ones you can find, you would need to cut them into smaller long spears, similar to the size of small garden cucumbers. The time to ferment might be shorter since there will be no skin to penetrate for the acid.

I have seen some Russian recipes for Dill Pickles that use just regular dill, not the flowering kind. I personally have not tried using regular dill but it should still work. You might need to use more dill than the flowering dill to impart more flavour into the brine.

You could possibly omit it but again, I haven’t tried doing that. You don’t eat the garlic, so don’t worry about garlic breath.

Horseradish root can be found in most grocery stores or farmers markets. If you don’t have fresh horseradish, do not add a horseradish condiment. It is not the same.

I have seen recipes using horseradish leaves also but I have never tried that since I don’t know where to get them.

I would suggest trying this Dill Pickles Recipe with 1.5 tablespoons of salt first and then increasing half a tablespoon at a time if it’s not salty enough. Just remember, this is a recipe for Low-Salted Pickles, so they should not be overly salty. 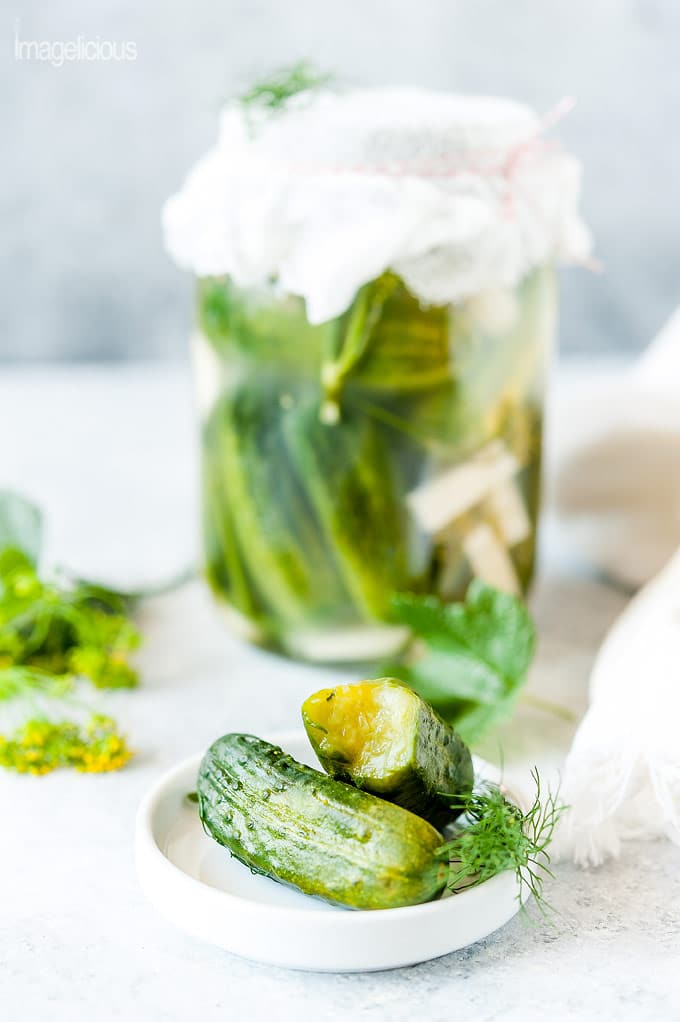 What equipment do you need to make Half-Sour Dill Pickles?

Nothing fancy really. You only need a few everyday things:

How long can these Quick Russian Dill Pickles be stored?

This Pickles Recipe is specifically for Low-Salted Dill Pickles (or Half-Sour Dill Pickles). As such, the pickles shouldn’t be stored in the fridge for more than 7 to 10 days. They will get progressively saltier and saltier as the time goes by.

The brine looks cloudy! Are the pickles spoiled?

NO!!! In fact, you want the brine to change colour a little bit. There will be a foam at the top of the jar and it’ll turn a bit white and cloudy. This is exactly what you are looking for! It is the sign of fermentation! 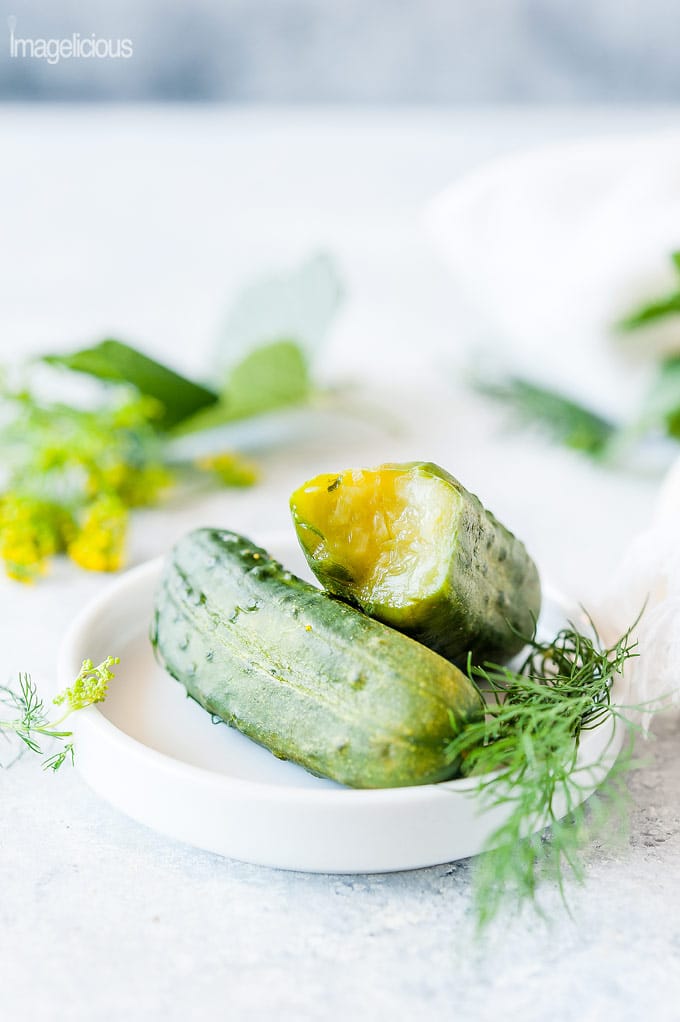 If you like Russian recipes, PRE-ORDER my cookbook, The Ultimate One-Pan Oven Cookbook, it has quite a few recipes inspired by my childhood favourites.

Read more: how much it cost to make pickles | Family Cuisine

Can you have caesar salad when pregnant

How to make green chile stew