Home  »  Sauce  »  how to make sisig sauce
Table Of Contents

Pork sisig is a popular Filipino dish. It can be considered as a main dish or an appetizer. The composition of this dish is mainly of pig’s parts such as minced pork meat, ears, and face. Chicken liver, onions, and chili peppers are also added. 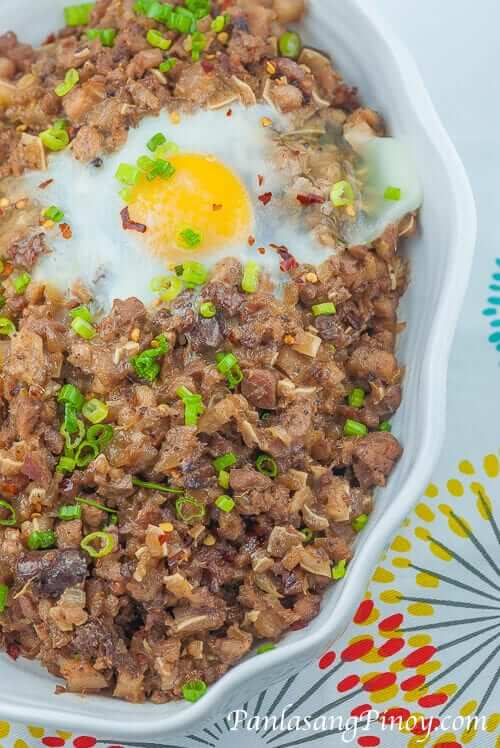 Reading: how to make sisig sauce

As mentioned, Sisig can also be enjoyed as a main dish and is best eaten a cup of warm white rice on the side. Sisig is synonymous to “pulutan”. It is a term used to describe food pairings with beer or any alcohlic beverage. I like to pair it with either beer or wine.

Sisig originated from Pampanga. This place is considered as the culinary capital of the Philippines. It was invented by Lucia Cunanan. She is popularly known as Aling Lucing and the Sisig queen.

The US military bases located in the town might have played a role in the invention of this dish. People can buy cheap pig heads in commissaries because these are not normally consumed inside the base. Meat from the pig heads are scraped out, boiled, grilled, and made into what is now known as Sisig

The originally sisig is composed of chopped pigs face with snout and ears. Chicken liver, pig brain, and onion along with calamansi are also part of the mix.

There are several sisig versions available today. There is a variety of main ingredients. It ranges from the original pig’s face to a more healthy seafood concoction. Squid Sisig, Tuna Sisig, Bangus sisig, and Tahong Sisig are some examples.

Pork Sisig has its variations too. Pork belly is a widely used ingredient in conventional sisig versions. There are also versions that use pork shoulder. Some will mix and match different pig parts.

Chicken sisig is a version that is starting to gain popularity nowadays. It is a good option for people who don’t eat pork.

Dinakdakan is a dish that closely resembles our featured recipe. Although the preparation and other ingredients vary.

How to Cook Sisig

This sisig recipe starts by boiling pork belly and pig ears until tender. These are then grilled for a few minutes until it browns and develops a good texture. I chop the meat into small pieces after grilling.

Start cooking the sisig by sautéing ginger. Add chicken liver. Cook it thoroughly. Note that ginger is an optional ingredient for this sisig version. I added it to reduce the gaminess of chicken liver. Feel free to use it based on your preference.

Add the minced meat. These are the pork belly and ears. Make sure to blend all the ingredients together. This will balance the flavor of the dish. Add the seasonings and spices afterwards.

You have the option to use a metal plate to serve the dish. This can also be served on a regular plate. I topped this version with egg. This is optional.

Try this delicious Sisig Recipe and let me know what you think.

Watch How to Cook Sisig