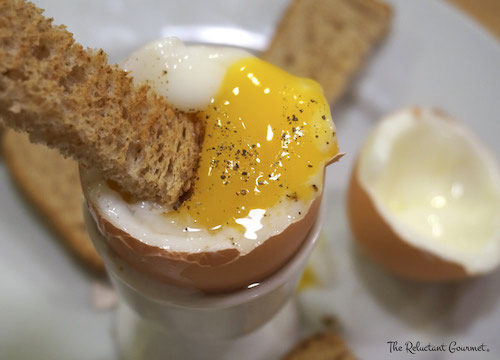 How to Prepare Soft Boiled Eggs

Crack! The shell breaks and the top comes off. Gooey, the yolk drips down the side. This is a soft-boiled egg.

I’m not sure if soft boiled eggs are as popular now as when I was a kid growing up in the 60’s but I sure have great memories of slicing off the tops and dipping my sliced piece of toast into the oozing yellow yolk seasoned with salt and pepper.

Just thinking about this routine breakfast delight takes me back to my childhood.

We lived in the New Jersey suburbs of New York City but my dad raised chickens in our back yard. I can’t imagine that the town I grew up in still allows anyone to raise their own chickens today.

We would go out in the morning and with the risk of getting pecked by some roosting hen, reach under and grab any fresh eggs she may be sitting on. Then for breakfast we had our choice of how we liked our eggs but I’m sure I asked for soft boiled most of the time.

My mom would serve our soft boiled eggs in a ceramic egg cup sitting on a small side plate with a second egg and a couple pieces of Wonder Bread toast sliced into the perfect size to dip into the eggs. On the table would be salt and pepper for seasoning.

When we were really small and not that good with knives, she would cut the tops off for us but as we got older, she trusted us to slice those tops off ourselves. There was always a discussion on how much of the top to remove.

Read more: how to make hard boiled eggs on the grill | Family Cuisine

Soft boiled eggs were first seen in Ancient Rome, where the recipe consisted of poking a hole in the egg before boiling, waiting five minutes, then cutting the egg in half. Next add pepper, pine nuts, honey and vinegar mixed with garum (fermented fish sauce).

It disappeared from history for a while until it comes back in Medieval France as a delicacy because of digestibility. Today, in modern times, it is an easy breakfast that can be done quickly that is still good. With a little practice anyone can do it. 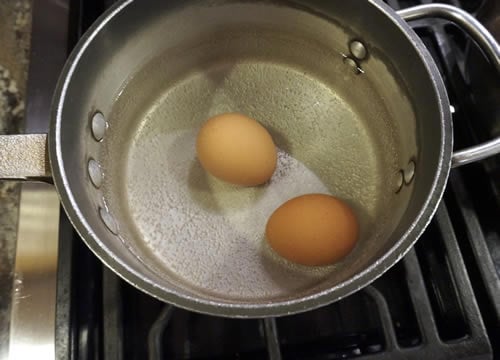 I’m not sure if my mom used an egg timer, they were popular back in the day. I think ours was an hour glass version you would flip over and when all the sand was gone, the egg was done. When I asked my brother about his experiences, he said they were different all the time.

Most people would say, including myself, when you cut off the top of a perfect soft boiled egg, the yolk is still runny so when you dip your “soldier” (sliced toast) into it, it drips down the side.

The yolk is cooked but just barely. Sort of like a sunny side up fried egg. The egg white should be firm but not hard.

My brother reminded me that he hated runny eggs and preferred when the yolk was firm and hard. To this day he says he can’t eat eggs “over easy” because of how my mom served him soft boiled eggs as a kid.

Today he is a bigger fan of hard boiled eggs. So it’s all a matter of personal tastes.

Maybe it was the holidays but I’ve recently become nostalgic for soft boiled eggs so I’ve been preparing them once every couple weeks and realized I’ve never written about them on familycuisine.net.

Like most things we cook, everyone has their own tried-and-true recipe for making the perfect soft boiled egg but there are a lot of variables that can affect the outcome, including:

There is nothing hard about cooking soft boiled eggs. It all comes down to timing and that depends on your personal preferences. Do you like them runny, firm or somewhere in between?

From my own experiences on my stove, five (5) minutes is the perfect amount of time for a soft boiled egg with a runny yolk. If you like them firmer, I would suggest starting with six (6) minutes and see how that works for you.

You can make adjustments based on your experiences but once you have it down, you’re good to go every time.

As much fun as it was eating soft boiled eggs as a kid, it was just as much fun to see what egg cup my mom would serve them in. She had a lot of choices especially since egg cups made great Christmas presents for my mom.