how to make tomatillo sauce for enchiladas | Family Cuisine 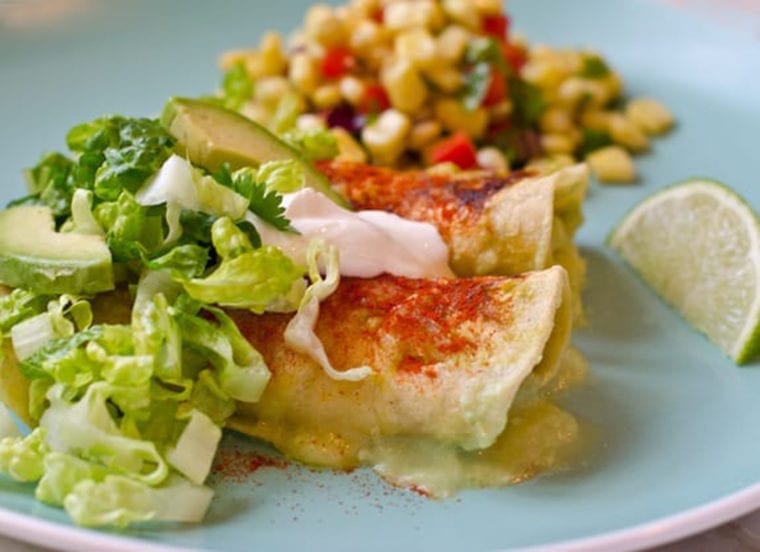 Reading: how to make tomatillo sauce for enchiladas

Most chicken enchilada recipes call for dark meat because it stays moist. This is important because the chicken is cooked twice: once in preparing the filling and then again in heating the assembled dish. However, I like to use chicken tenderloins; they’re much easier to prep than dark meat and, unlike boneless breasts, they stay tender even if slightly overcooked. Plus, tenderloins are usually sold in convenient one-pound packs, which is exactly how much you’ll need. 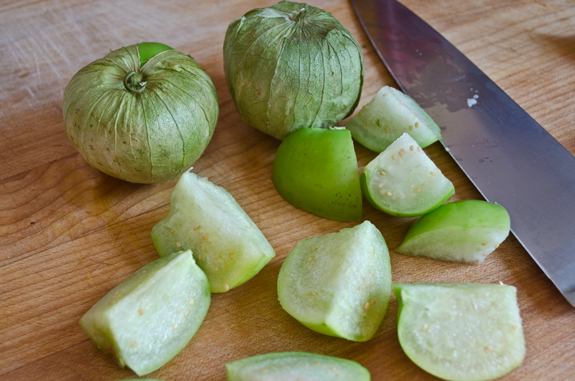 The sauce for this dish is made with tomatillos. If you’re unfamiliar with them, they look like small green tomatoes covered by a papery husk. They’re related to tomatoes but have a distinctive tart flavor. (Note that they are not the same as green tomatoes, which are simply unripe tomatoes.) You can find them in most grocery stores. 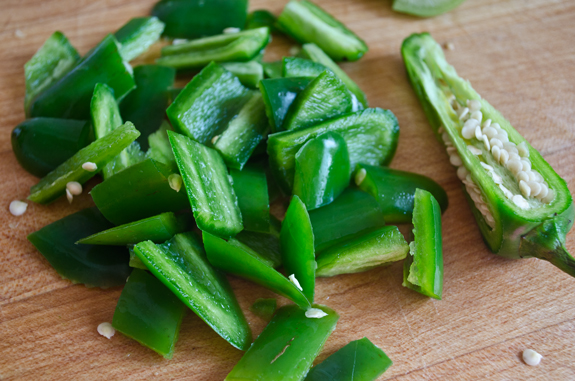 Finally, this recipe calls for three jalapeño peppers, which I know seems like a lot. Don’t worry, as long as you remove the fiery ribs and seeds, the enchiladas won’t be spicy. When you taste the sauce on its own, it will have a little kick but once you put the dish together it will be mild enough even for young children. If you’d like more heat, throw in some of the seeds. (Always wear gloves and/or wash your hands very well after working with jalapeños, and keep your hands away from your eyes!)

How to make chicken enchiladas

Begin by making the tomatillo sauce. Cook the onions and garlic in olive oil until soft (no need to chop them too finely since it all gets puréed in the end). 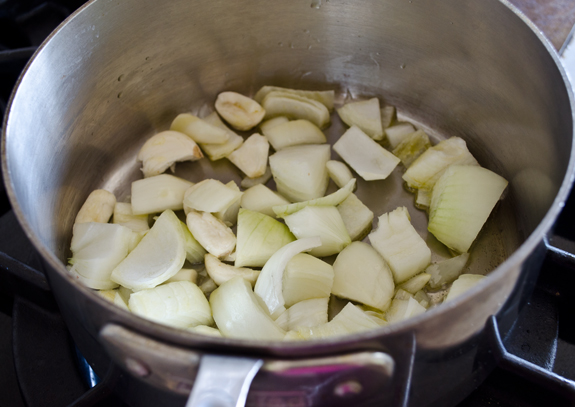 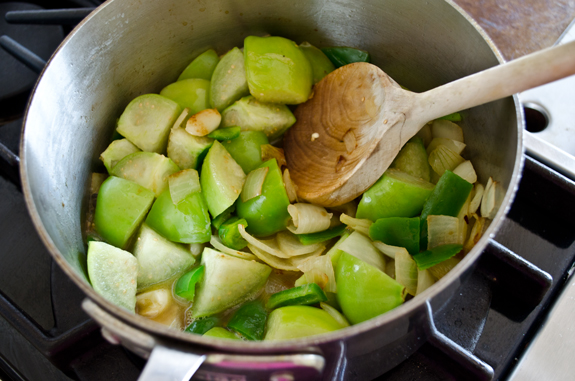 Simmer until the tomatillos are soft. 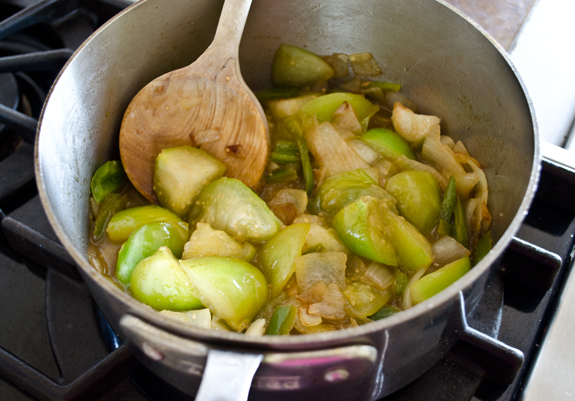 Then, transfer the mixture to a blender and purée until completely smooth. Set the sauce aside and start the filling. 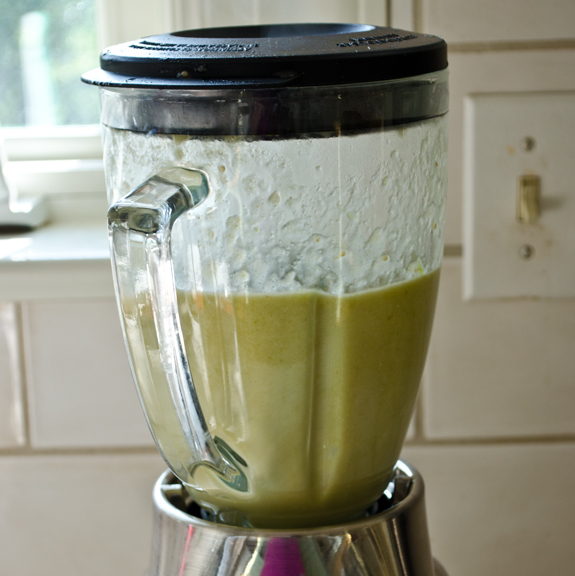 Season the chicken with the cumin, smoked paprika and salt. 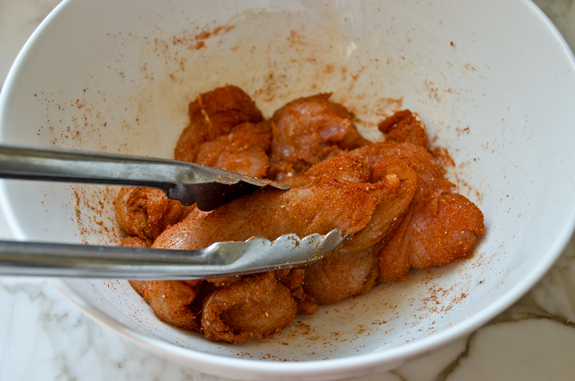 Sauté the chicken in olive oil until just cooked through, about 2 minutes per side, then set aside to cool. 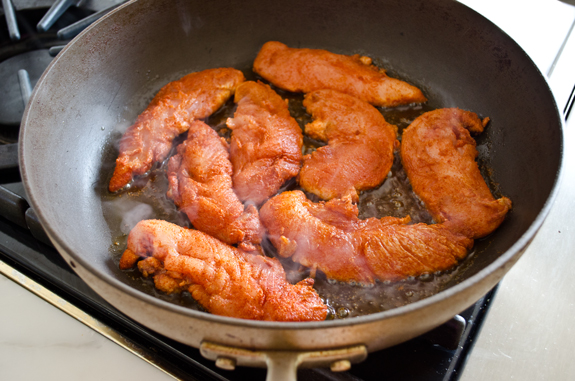 Once cool, shred the chicken into bite-sized pieces. Tenderloins all have a tough tendon running through them; just remove it. 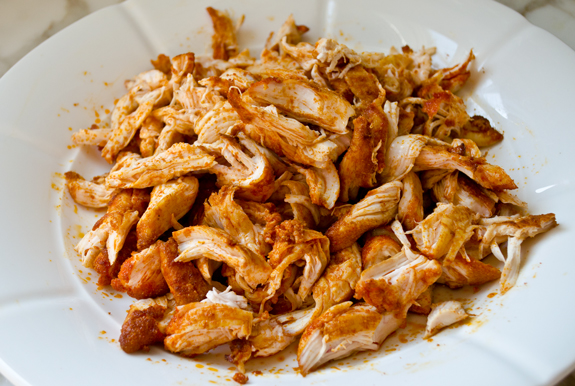 In the same pan that you cooked the chicken in, cook the onions until soft. 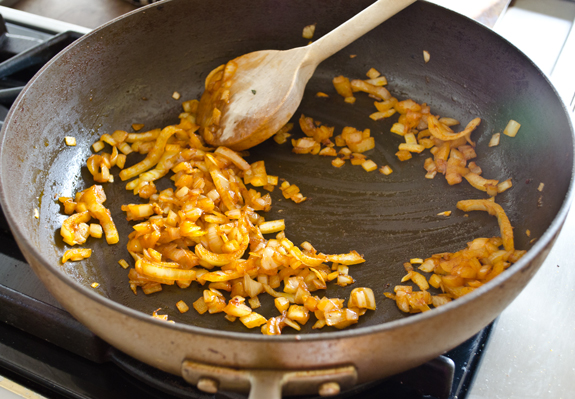 Remove the pan from the heat, then add the shredded chicken along with the cilantro and shredded cheese. 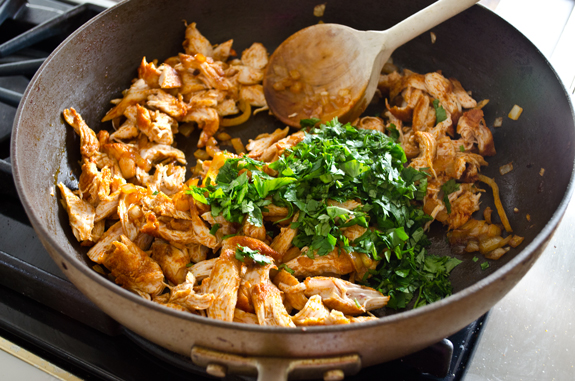 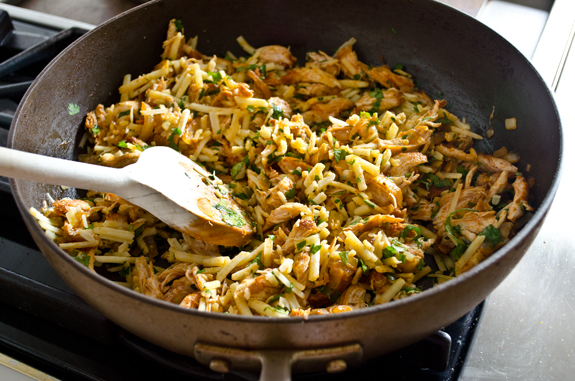 You can make the dish ahead of time up to this point.

To assemble the enchiladas, begin by smearing 3/4 cup of the tomatillo sauce on the bottom of a 9 x 13-inch baking dish. 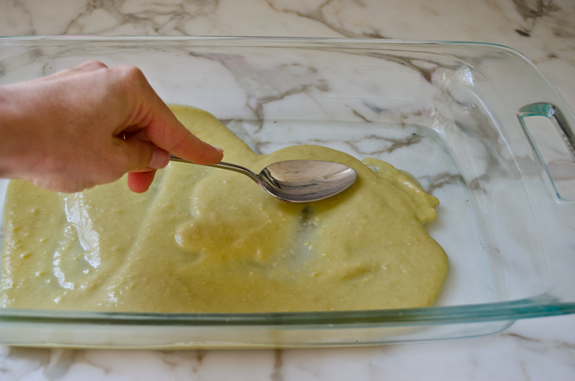 Next, brush each tortilla on both sides with oil. 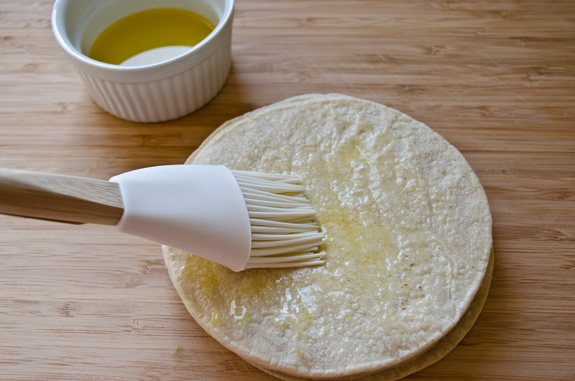 Stack them on a plate and microwave until hot and steamy, about 2 minutes. This makes them pliable; if you skip this step, they’ll shred to pieces when you roll them. 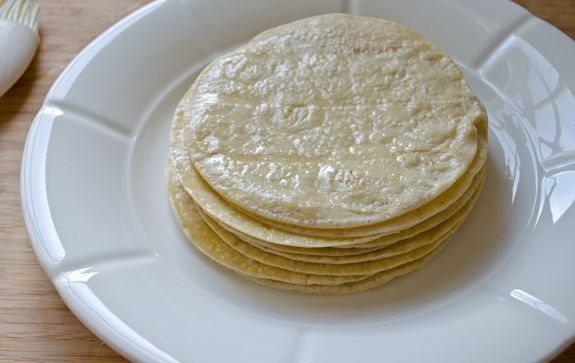 Spoon the filling down the middle of each tortilla. 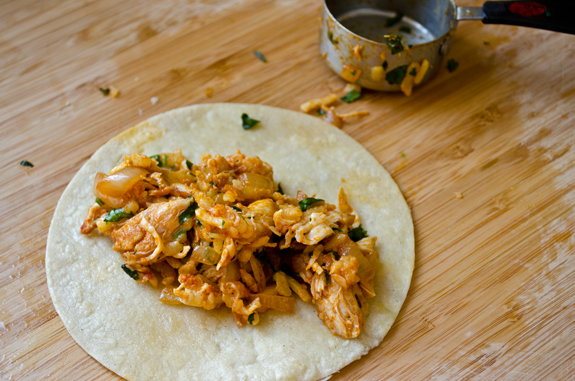 Then roll tightly with your hands. 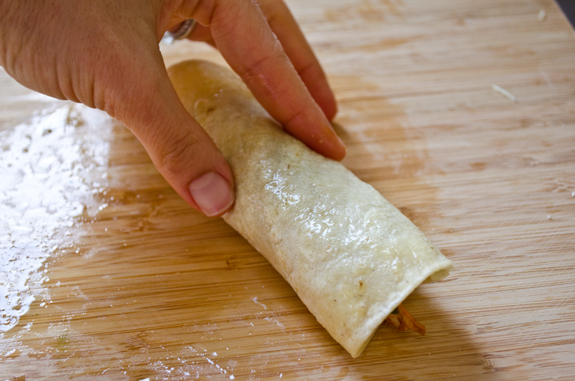 Place the enchiladas side by side, seam side down, in the prepared baking dish. Pour the remaining sauce over top. 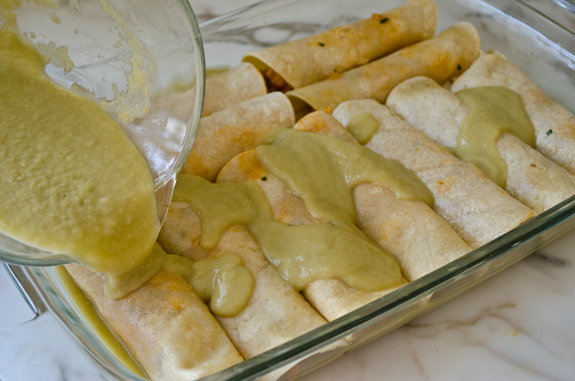 Spread the sauce evenly over the tortillas, then sprinkle with more grated cheese. 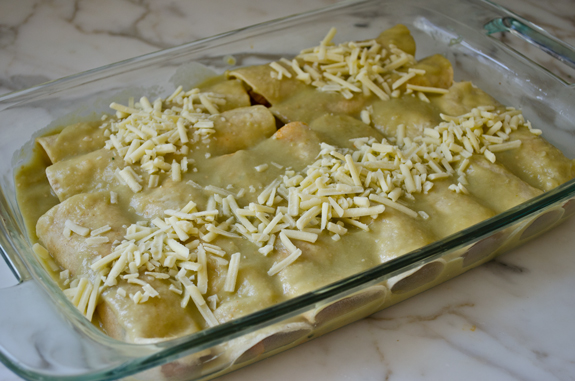 Bake until sauce is hot and bubbling and cheese is melted, 15-20 minutes. 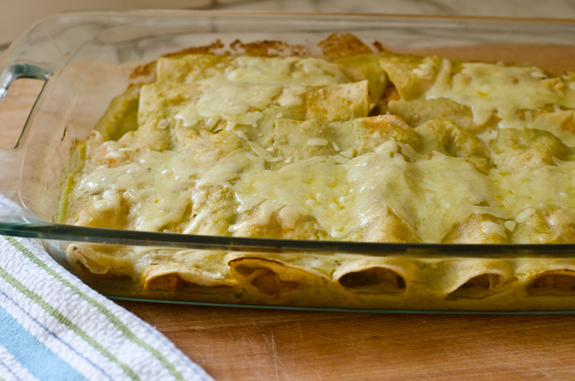 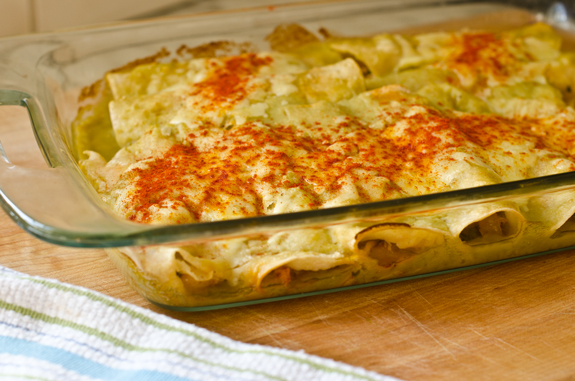 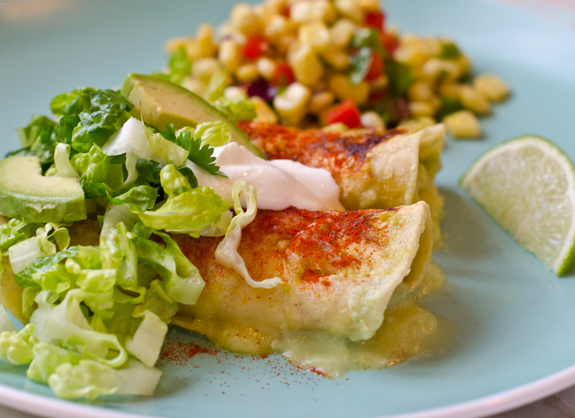 Note: My starting point for this recipe was a similar version in Cook’s Illustrated. I made a lot of changes, but the tomatillo sauce is very similar to the original recipe.

How much beef broth for beef stew