Who doesn’t love a piece of grilled chicken that’s been marinated in a delicious marinade? While BBQ chicken grilled with a few spices is good, one that’s been marinated steps up the taste a few bars. If you’re wondering how to marinate chicken in BBQ sauce, it’s good to know a few tricks in using BBQ sauce as a marinade.

BBQ sauce is an eclectic combination of seasonings, spices, sugar, and flavorful liquids. Most cooks use it to baste their meat towards the end of grilling or cooking. It adds a delectable taste while forming a sticky, dark coating.

Reading: how to marinate chicken breast with bbq sauce

BBQ Sauce: As a Marinade or Not That’s the Question

Basting your meat with BBQ sauce turns the meat from a Plain Jane into a mouthwatering taste sensation. And that’s the best way to use BBQ sauce, but have you been tempted to marinate your chicken with BBQ sauce because it seems like a good idea? 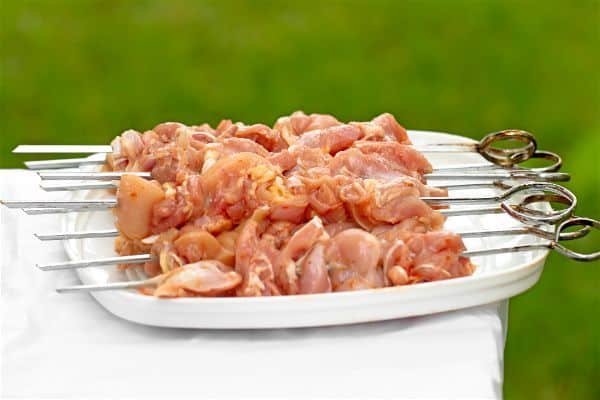 Why we Marinate BBQ Chicken

Marinade is used to not only add flavor and taste but to tenderize tougher cuts of meat. Marinated meat ends up being moister and more palatable when cooked. Chicken does well when marinated especially the breasts.

Marinades include ingredients such as vinegar or lemon juice. These acids not only enhance the flavor of the meat, but they soften the surface texture. Oil is added to help with the transfer of flavors from the spices and herbs.

Salt draws out the meat liquids before it’s reabsorbed again with flavors drawn from the marinade ingredients such as garlic and onions. This brining process helps to break down the muscle texture of the meat.

When you marinate chicken, you can expect it to not only be full of flavor, but it’ll be juicier, tenderer and an all-round delicious experience.

BBQ Sauce as a Marinade

Marinating BBQ chicken requires leaving raw chicken in a marinade for a few hours or even overnight. To get the most benefit out of marinating the right balance of ingredients need to be included. Think of a ratio of acids, oils, and seasonings as ingredients for the best marinade.

BBQ sauce contains a lot of sugar. Which is fine and well until you start cooking with it! It burns quickly and with chicken needing a bit of time to cook, this can be a disaster. If your BBQ sauce cooks before your chicken does you’ve got a problem on your hands. 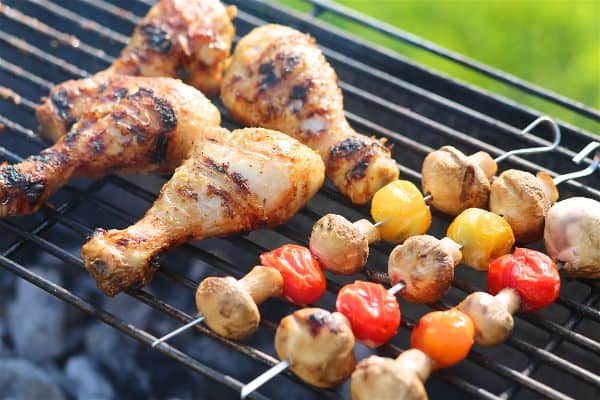 If you decide to use BBQ sauce straight out the bottle as a marinade, then consider washing it off before grilling your chicken. This will prevent the chicken burning before it’s ready to eat. But this way of using BBQ sauce as a marinade seems wasteful.

And if you like your chicken to be crispy especially the wings and drumsticks, soaking in BBQ sauce overnight is going to kill any crispiness from happening. This applies to any type of marinade so if you want the crackle, then avoid marinating chicken before grilling.

But if you get innovative with BBQ sauce you can use it as a marinade. Let’s talk about turning this sauce into a concoction with other ingredients so it can marinate your chicken before grilling.

By using BBQ sauce as part of a marinade you’ve got yourself a recipe that’ll not only enhance the marinating process but will enhance the flavors. It’s all about balance. This balance is easier to reach when you make your own barbeque sauce. You’ve more control over the amount of sugar being used.

Watch this video to discover how you can make your own BBQ sauce.

With store-bought BBQ sauce it’s likely to be loaded with sugar. The thicker the consistency the more sugar you can expect to find in the sauce. So, the secret to using this kind of sauce in a marinade is to thin it down with other ingredients.

If you’re not sure about quantities, it’s good to follow a recipe. What you need to be careful of is turning your chicken into a mush overnight. This happens when you’ve added too much acid in the marinade so go easy with the vinegars or citrus juices. An overly acidic marinade can also toughen meat even more!

You may also decide to not marinade a whole raw chicken before grilling. Instead, opt to marinade the breast meat which is the tougher parts of the chicken.

A word of warning: when you’re done with marinating the chicken don’t be tempted to keep the marinade sauce. The risk of salmonella is high so unless you intend cooking the sauce, toss it out. 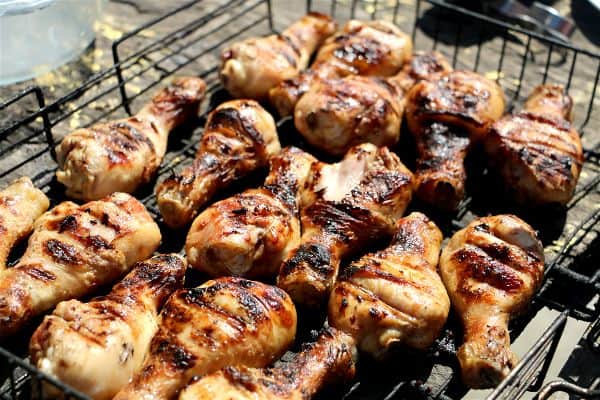 With any of the combinations mentioned above, you can get the best results from your BBQ sauce marinade when you use the following ways of marinating chicken:

The key to marinating raw chicken before grilling is to not have too much acid in the recipe if you’re leaving it to marinate for a long time. You’ll end up with either very tough chicken or chicken flesh that’s turned soft. 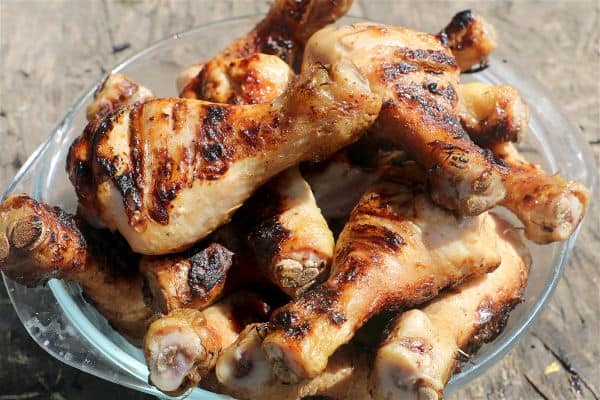 Other Ways of Adding BBQ Sauce to Chicken

If you decide to not use BBQ sauce as part of your marinade before grilling, consider using it in other ways to still benefit from the flavor of these sauces.

Grilled BBQ chicken must be one of the most delicious meals enjoyed by many. And it seems to make sense to marinate chicken in BBQ sauce before grilling. But unless you’re using a homemade BBQ sauce with less sugar, you run the risk of burning the chicken before it’s cooked.

By using some of my suggestions in this article, you’ll still benefit from adding BBQ sauce to your grilled chicken, either before grilling it or after it’s cooked. Give them a go and see which way turns your Plain Jane chicken into a scintillating piece of BBQ chicken.

Read more: how to make bbq sauce with ketchup and honey | Family Cuisine