How To Prepare and Cook Perfect Ham

Ham is always popular to serve for a holiday dinner. We are sharing our How To Prepare and Cook Perfect Ham resource guide with tips on quantities to purchase, how to thaw ham, cooking time table, carving tips and some of our favorite ham recipes and glazes to help you. 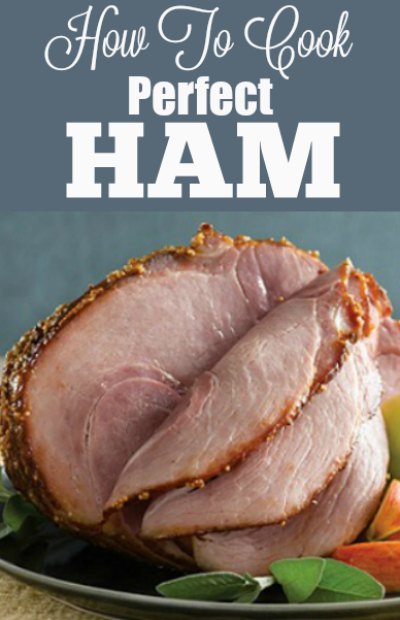 How To Prepare and Cook Perfect Ham – Ham 101 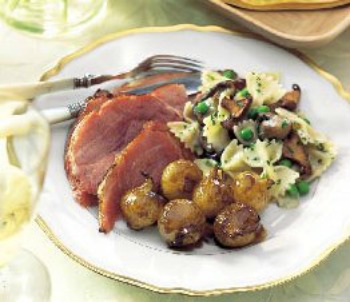 How To Cook A Fully Cooked Ham: Both vacuum-packaged fully cooked and canned hams can be eaten cold just as they come from their packaging. However, if you want to reheat these fully-cooked hams, set the oven no lower than 325 degrees F. and heat to an internal temperature of 140 degrees F. as measured with a meat thermometer.

Cook-before-eating hams must reach a temperature of 160 degrees F. to be safely cooked before serving. Cook in an oven set no lower than 325 degrees F. Hams can also be safely cooked in a microwave oven, other counter top appliances and on the stove top. Consult a cookbook for specific methods and timing.

Country hams or dry-cured hams (ham that has been cured, smoked and aged for a period ranging from a few months to a year or more) can be soaked 4 to 12 hours or longer in the refrigerator to reduce the salt content before cooking. Then they can be cooked by boiling or baking and must much a temperature of 160 degrees F. Follow the manufacturer’s cooking instruction.

Ham Glazes – Glazes can range from a simple brush of maple syrup to complicated mixtures made of sugars and seasonings. Prepare your favorite ham glaze and brush evenly over the surface of the warm ham. The glaze should be added during the last 20 to 30 minutes of heating time so the glaze does not burn.

A precooked ham does not have to be cooked, but will taste better if you heat it thoroughly to an internal temperature of 140 degrees F. (60 degrees C). Place the ham in a 325 degrees F. oven (163 degrees C). You want to reheat the ham without drying it out. he best way to do this is to place the ham on a rack in a roasting pan. Add water to the bottom of the pan and cover tightly with aluminum foil (cover the pan with the ham).

Carving Ham – How To Carve Ham:

When checking the temperature of your ham, insert meat thermometer so tip is in thickest part of ham, not resting in fat or touching bone. Cook until the ham reaches an internal temperature of 160 degrees F.

Remove from oven, cover loosely with aluminum foil, and let sit approximately 15 to 20 minutes. NOTE: Cutting into the meat too early will cause a significant loss of juice. Do not skip the resting stage.Use a long, thin, sharp knife (choose a carving knife that is long enough to cut the entire length of the cut). Sharpen your Carving Knife, if necessary, using either a sharpening rod or stone.

Place the ham on a cutting board and trim off 2 or 3 slices, parallel to its length, from the thin side of the ham.

Turn the ham so that it rests on the flat side created from trimming off the slices. Hold the ham firmly with a carving fork and starting at the shank end, cut slices across the ham, down to the bone.

After cutting the slices, cut parallel along the bone to release the slices. Place slices on a serving platter.

Turn the ham and continue to carve slices in the same manner.

Ham Do’s And Do Nots:

Do allow the ham to sit at room temperature for 1 to 2 hours before cooking.

Do trim the fat, leaving a 1/4-inch layer. Score the fat into a diamond pattern by cutting 1/4-inch to 1/2-inch deep into 1-inch to 2-inch squares. Not only does scoring look nice, but it allows fat to render from the ham and provides greater surface area for the glaze to stick to. You may not be able to score a ham that has been “super trimmed” and has little fat left.

Do use a sharp carving knife with a thin blade to cut the ham, or buy a spiral-sliced ham.

Do Not forget to line your water pan with aluminum foil if cooking a ham at high temperature and with an empty water. Cleanup will be much easier.

Do Not baste the ham with its drippings during cooking, as they tend to be too salty.

Do Not coat the ham with sugar, honey or glaze until the last hour of cooking. One application is usually enough.

Do Not throw out the ham bone – use it to flavor soups or bean dishes.

Ham – the all-purpose leftover – You can use leftover ham in soups, casseroles, pasta dishes, and salads. And, like turkey leftovers at Thanksgiving, ham makes an wonderful sandwich. It is a perfect pairing for many egg dishes. Chopped ham tastes great in frittatas (an egg dish resembling an omelet that’s not folded over and is usually finished under the broiler) and quiches. Ham is ideal pan-fried and served with scrambled eggs. See the delicious recipes using ham in the left column.

Remember to save the ham bone for your soups. Especially Lentil Soup and Senate Bean Soup. Just remember to watch how you salt or season the leftover dishes you make. Ham tends to be salty and can make whatever you are making salty, too.

Ham Nutrition – Ham is one of the leanest cuts of pork. According to the USDA, a 3.4 ounce (100 gram) serving of roasted extra-lean ham has about 145 calories, 5.5 grams of fat, 21 grams of protein and 53 milligrams of cholesterol. Ham contains a significant amount of vitamins B-1 and B-12. While fresh pork is low in sodium, ham is high in sodium as a result of the curing process. According to the USDA, a serving of ham can contain about one-half of the recommended daily intake of sodium.

Foodborne Organisms – These organisms are associated with ham.

Staphylococcus aureus (staph) – is destroyed by cooking and processing but can be re-introduced via mishandling; the bacteria can then produce a toxin which is not destroyed by further cooking. Dry curing may or may not destroy S. aureus, but the high salt content on the exterior inhibits these bacteria. When the ham is sliced, the moister interior will permit staphylococcal multiplication; thus sliced dry-cured hams must be refrigerated.

Mold – can often be found on country cured ham. We believe most of these are harmless but some molds can produce mycotoxins. Molds grow on hams during the long curing and drying process because the high salt and low temperatures it with hot water and scrub off the mold with a stiff vegetable brush.

BUTT END, HALF OR PORTION – The upper, meatier part of the whole leg; a butt portion has had some center slices removed for separate sale as ham steaks or center cut ham slices. The half includes this meat.

Shelf stable – Store on shelf up to 2 years at room temperature. Generally not over 3 pounds in size.

Refrigerated – May be stored in the refrigerator up to 6 to 9 months. Its weight can be up to 8% more than original uncured weight due to uptake of water during curing. It need not be labeled “Added water” except for “In Natural Juices.” Net Weight is the weight of the actual ham excluding the container.

HAM CAPACOLLA – Is made with ham instead of pork shoulder butts.

COOK BEFORE EATING – Needs further cooking. Is not completely cooked in the plant and should be cooked to 160F.

COTTAGE HAM – A ham made from the shoulder butt end.

FRESH HAM – The uncured leg of pork. Since the meat is not cured or smoked, it has the flavor of a fresh pork loin roast or pork chops. Its raw color is pinkish red and after cooking, greyish white.

FULLY COOKED – Needs no further cooking. Fully cooked in plant. Can be eaten directly as it comes from its packaging or reheated.

GELATIN – About one-fourth ounce of dry gelatin is often added before a canned ham is sealed to cushion the ham during shipment. During processing, natural juices cook out of the ham and combine with the gelatin. When the ham cools, a jell forms.

HAM – The product is at least 20.5% protein in lean portion and contains no added water.

HAM with NATURAL JUICES – The product is at least 18.5% protein. Can weigh 8% more than uncured weight. Example: canned hams.

HAM – WATER ADDED – The product is at least 17.0% protein with 10% added solution; it can weigh 8% more after curing than uncured.

HAM AND WATER PRODUCTS – Product may contain any amount of water but label must indicate percent of “added ingredients.” For example, “X % of weight is added ingredients” for any canned ham with less than 17.0% protein.

HICKORY-SMOKED HAM – A cured ham which has been smoked by hanging over burning hickory wood chips in a smokehouse. May not be labeled “hickory smoked” unless hickory wood has been used.

“LEAN” HAM – The term “lean” may be used on a ham’s label provided the product contains less than 10 grams fat, 4.5 grams or less of saturated fat, and less than 95 milligrams cholesterol per 100 grams and Reference Amount Customarily Consumed (RACC).

“EXTRA LEAN” HAM – A ham labeled “extra lean” must contain less than 5 grams fat, less than 2 grams saturated fat and the same cholesterol as allowed per the amount of “lean” ham.

PICNIC, PORK SHOULDER PICNIC – A front shoulder cut of pork which has been cured in the same manner as ham.

PROSCIUTTO HAM – An Italian-style dry cured raw ham; not smoked; often coated with pepper. Proscuitti can be eaten raw because of the way they are processed. PARMA HAM is prosciutto from the Parma locale in Italy. These hams tend to be larger than the U.S. produced product, as Italian hogs are larger at slaughter.

SECTIONED AND FORMED or CHUNKED AND FORMED – A boneless ham that is made from different cuts, tumbled or massaged and reassembled into a casing or mold and fully cooked. During this process it is usually thoroughly defatted.

SHANK END, HALF OR PORTION – The lower, slightly pointed part of the leg. A “portion” has the center slices removed for separate sale as “ham steaks” or center cut ham slices. The half includes this meat.

SKINLESS, SHANKLESS – A ham with all of the skin and the shank removed. The leg bone and aitch (hip) bone remain.

SUGAR CURED – A term that may appear on ham labels if cane or beet sugar is at least half the sweetening ingredients used and if the sugar is used in an amount sufficient to flavor and/or affect the appearance of the finished product. Most hams contain sugar in the curing mixture.