how to save corn that has been boiled | Family Cuisine

Biting into fresh corn on the cob slathered with butter is one of life’s true pleasures. Growing your own sweet corn allows you the simple luxury of savoring the unbeatable, indescribable flavor of eating it minutes after it’s picked.

Here’s a rundown on several ways you can prepare this summertime favorite. With each of these methods, the crucial factor is freshness. For most varieties have the water boiling before you pick your corn. With many of the heirloom varieties, a few minutes can make a big difference. For the supersweet varieties you can slow down a bit because their sweetness will last for a few days. For the best flavor, corn on the cob should be served immediately after it’s cooked.

Most people will develop their own favorite cooking technique, but to get you started here are several to try out. Cooking methods and times vary according to taste, so try them all and use whichever you prefer.

Steaming – Husk the corn and place it in a perforated steamer over rapidly boiling water. Cover and steam 8 to 12 minutes, depending on the corn’s maturity.

Roasting or Grilling – Corn is a natural for roasting because its husk is a ready-made steam cooker. Preheat oven to 475oF or have your grill good and hot. Remove the outer layer of husk, and turn down the inner layer. Remove silks and dip corn, husk and all, in water. Drain. Pull husk back around ear and place on rack in hot oven or over hot coals for 20 to 25 minutes, turning frequently. Remove husks and serve.

Microwaving – Peel down husks and remove silks. Brush ears with melted butter and pull up husks. Fasten with string or rubber bands. Place in microwave oven, allowing at least one inch between ears. Cook 4 minutes at full power and turn ears over. Cook 4 minutes more on full power. Let stand 2 to 3 minutes, then turn back the husks and serve. (Recipe courtesy of Sharp Electronics Corporation.)

Many southerners were raised on the rich, full flavor and chewy texture of white field corn picked early. The following directions for cooking this southern specialty come from long-time gardener Darryl Riggins of Georgia.

For best thickening action, use a variety such as Trucker’s Favorite, Tennessee Red Cob or Hickory King. Harvest just like sweet corn, when the ears are plump and milky, then shuck the ears and remove the silks.

Cut down the cob, slicing halfway or less through the kernels. With your knife scrape the cob to force all the milk out. Pour your treasure into an iron skillet, add a knob of butter, salt, pepper and milk. Cover and cook over low heat 10 to 15 minutes, or until mixture starts thickening. Add more milk to keep the consistency right (about like applesauce).

You’ll probably find yourself eating fresh corn on the cob almost every day during the fresh corn season, but you may also want to freeze or can enough corn to last through the winter.

For the best tasting results, use only freshly picked corn. Pick no more than you’ll be able to can or freeze within two to three hours. Because corn loses its flavor and its sweetness quickly, you have to work fast during processing.

Whole-kernel – Husk and wash ears. Scald 4 minutes in boiling water. Plunge quickly into ice water to cool. Leave in water about four minutes and then drain. Cut kernels from cob at about 2/3 their depth. Pack in freezer containers. Seal, label and freeze.

Cream style – This is the best way to use mature, starchy ears. Husk, wash, scald and cool ears as for whole- kernel corn. Cut kernels from cob at about half their depth. Scrape the cob with the back of the knife to remove juice and meat of the kernels. Pack in freezer containers, leaving 1/4 inch of headspace. Seal, label and freeze.

Corn on the cob – Husk and wash ears. Scald small ears (11/2 inches or smaller in diameter) 6 minutes; medium ears (11/2 to 2 inches across) 8 minutes; ears larger than 2 inches in diameter 10 minutes. Cool quickly in ice water for same amount of time as scalding. Drain. Pack in freezer containers or wrap ears individually in moisture- and vapor-proof film and place in plastic freezer bags. Seal, label and freeze.

To cook frozen corn on the cob with the freshest taste, place it un-thawed in cool water. Bring the water to a boil and cook for 5 to 10 minutes, depending on the size of the ears.

Hot pack – Husk, remove silks and wash corn. Cut whole kernels off the cob; do not scrape the cob. Measure the corn and place it in a large saucepan. For each quart of cut corn, add 2 cups of boiling water. Bring the corn and water back to a boil.

Cold or raw pack – Husk and cut the corn as you would for hot pack. Pack the corn loosely into hot jars, leaving one inch of headspace. Add 1/2 teaspoon of salt to each quart, if desired. Cover with boiling water, leaving one inch of headspace. Adjust lids. In a pressure canner at 10 pounds of pressure, process pints for 55 minutes and quarts for 1 hour and 25 minutes.

Hot pack – Husk, remove silks and wash the corn. Cut the kernels off the cobs at two-thirds of their thickness. To make the cream, scrape the cobs but do not cut them. Measure the corn and add one pint of boiling water to each pint of corn. Heat to boiling, then pack immediately into hot pint jars only, leaving one inch of headspace. Adjust lids. In a pressure canner at 10 pounds of pressure, process pints for 1 hour and 25 minutes.

Cold or raw pack – Husk, wash and scrape the kernels as you would for hot pack. Pack the corn loosely into hot pint jars and cover with boiling water, leaving one inch of headspace. Adjust lids. In a pressure canner at 10 pounds of pressure, process pints for 1 hour and 35 minutes.

This old-time method is a good,low-energy way to have sweet corn on hand all winter.

Use freshly picked sweet corn, and prepare it as you would for freezing. Husk the ears. Don’t worry if the silks cling; they’ll come off easily after drying. Blanch the cobs in boiling water for 2 minutes. This “sets” the milk inside the kernel. Drain and cut the kernels off the cobs.

Spread the kernels on trays for drying. Dry for two to three days in the sun, bringing the trays indoors at night. The kernels can also be dried in an oven or dehydrator set at 120oF for 12 to 18 hours. Stir the kernels occasionally and keep them separated – they’re dry when they have shriveled and are hard. Shake off the dried silks and store the dried kernels in airtight containers. They should keep indefinitely.

To cook: Cover one cup of dried corn with 2 cups of boiling water and simmer, covered, for 50 minutes or until the corn is plump and tender. One cup of dry corn yields about two cups of cooked corn.

Some gardeners are becoming interested in growing corn for grinding, especially in the case of some of the unusual blue- and red-kerneled Native American varieties. You can actually dry and grind any late-season variety – field, flint, sweet and even popcorn can be ground into cornmeal or flour. However, because of its hard starch, flint corn grinds beautifully, so it’s preferred by most folks. No matter what variety you choose, leave the ears on the stalk until after the first fall frost to give the kernels a chance to mature and harden completely. Gardeners who live in areas with relatively snowless winters can leave the corn standing in the field all winter. Although you can dry corn this way, it’s better to harvest the crop and dry it away from hungry birds. Wet winter weather can also lead to mold.

Harvest the ears, remove the husks and place the ears in mesh bags. Or, if you prefer, braid or tie the husks together. Then hang the corn in a cool, dry place for several months to dry. You can leave the kernels on the cobs until you’re ready to grind them, or shell the dry kernels and store them in airtight containers in a dry place.

Use a hand-cranked or electric grain mill to grind corn. Grind it as you need it, so it will have the fullest flavor and the most nutrition. Depending on how coarsely you grind the kernels, you can enjoy cracked corn for a delicious hot cereal or finer cornmeal for breads and hot cakes. Ground corn will be yellow, white or even blue, according to the variety grown. Corn flour is made by stone-grinding the kernels to a fine powder; this flour can be used in baking. The thickening agent, cornstarch, is made commercially by a special wet-milling process that removes the hull before grinding.

A note on corn cobs: If you like to smoke meat or fish, corn cobs left from the kernels you’ve dried and ground work beautifully and impart a wonderful flavor. Chop or shred the cobs for the best results. Cobs left over from sweet corn roasts won’t work because the cobs have to mature and dry thoroughly.

There’s an endless array of bread and cakes made with cornmeal. They can be made from your own ground meal or from store-bought meal.

Here’s an explanation of some old-fashioned favorites for those who may not be familiar with some of the names.

Other articles in this series: 1. Harvesting Corn 2. Cooking and Storing Corn ← you’re on this article right now 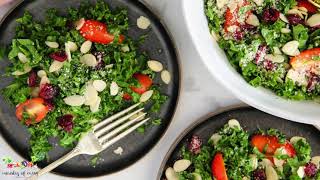 Below is a list of the best kale salad with cranberries almonds and goat cheese voted by users and edited by familycuisine.net, let’s find out with us