how to stop food from sticking during stir fry | Family Cuisine

Hello, I’m new to the forum and desperately need some advice, this question has probably been asked a 100 times in the past, and If so apologies in advance.

I recently purchased a 14 inch uncoated carbon steel wok. I removed the lacquer coating and began to heat the wok, as per instructions, i feel at this stage i may not have heated the wok enough. i.e. past the blue/yellow stage when the wok begins turning silver again. I did heat the wok sufficiently and evenly turning the wok to expose the sides, after this had been completed, i let the wok cool down slightly and began lightly seasoning the wok with groundnut oil using tongues and kitchen roll. I continued this until the tissue showed no yellow stains and was clear, the wok by this time had turned a dark yellowish colour deepening to red toward the middle of the wok. I left the wok overnight. The following day i cooked for the first time, i began by lightly stir frying the chicken and vegetables with no hiccups, but has soon has i added the noodles, with no time they began to start sticking to the middle of the wok? After I’d finished, (the food was great by the way) but the wok was a wreck.

The following day i couldn’t help thinking id missed something during the process, so decided to start again and completely clean the wok, so i set to work and pretty much restored the wok back to its bare metal. I then searched YouTube and thought I’d watch a few videos. I began by heating the wok, but this time i left it on the jet a while, past blue and black until the wok began turning its original clean carbon steel colour, (by the way this is on a conventional UK gas hob, using the large gas jet) It took me a while, but i persevered. At this point I’d seen a few videos showing people throwing water in the wok while it was this hot, so foolishly, (I think this was a mistake) i poured cold water in, this hissed like hell and turned the wok an horrible brown colour in parts, (I now realised they probably did this with a completely new wok to remove the lacquer still in place) anyway i proceeded and reheated the wok to a very high temperature and once again began seasoning, i evenly seasoned the wok for sometime and then began to stir fry a few things to continue the process, no problems whatsoever, this began to feel far slicker and i pretty much seared the veg. The next day I was quite excited to use the wok a decided on a simple chicken fried rice dish, i began once again cooking the chicken , mushrooms etc. and has soon as i introduced the rice once again it began to stick to the wok, everything else was ok. I don’t know if I’m cooking them too high or to low? But something must be a miss, because I’ve followed the instructions, (2nd time perfectly) to the letter and food is still sticking. It just seems to be with rice and noodles

To summarise I’m using an domestic UK gas hob with the largest jet, the centre flame measures around 4 1/2 inch diamiter, this should be more than adequate heat and infinitely superior to electric. The wok is a new 14 inch Dexam flat bottomed carbon steel wok and on all occasions i have only used, (sparingly) groundnut oil for cooking.

Please, please help. I can’t help thinking it’s the temperature I’m cooking at or something elementary and simple I’ve overlooked, but any advice or tips would be much appreciated. The picture is what the wok looks like after two attempts at tempering and reseasoning. I don’t realy want to do this a third time, i fear rust may become an issue otherwise.

Sorry for the long post, but i thought I’d include everything for those who may be able to offer some advice or help. 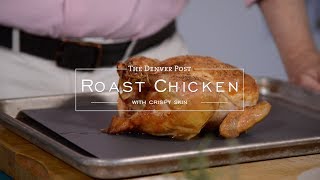 Top 20+ how to get crispy skin on roast chicken

Below is a list of the best how to get crispy skin on roast chicken voted by readers and compiled by Family Cuisine, invite you to learn