Reading: iraqi dessert recipes that are easy to make at home

In Iraq, in Christian and Muslim families alike, kleicha, a cookie made with dates and with a delicious cardamom flavor, can be found on every kitchen table during religious holidays. It is the national pastry of Iraq and Saudi Arabia.

Kleicha (in Arabic : كليجة ) is a traditional Iraqi cookie usually stuffed with date paste or with a mix of walnuts and sugar.

The date variant is undoubtedly the most popular and widespread one in Iraq. This date pastry is called kleichat tamur.

This version is made by rolling up cookie dough around a thin layer of date paste. This process forms smooth biscuits with a rounded shape and a clear contrast between the white cookie dough and the black date paste.

A special feature of kleicha lies in the fact that its cookie dough is leavened and does not contain eggs.

This dough is very fragrant since it contains small nigella seeds. Some traditions even add sesame seeds and rose water in the dough. Others even flavor the egg yolk that covers the cookies with saffron before putting them in the oven.

Nigella seeds are very fragrant and really give the cookies a distinctive flavor. They are also used to bake different types of bread like the Italian bread from Tunisia, or to decorate some biscuits.

Traditionally, kleicha is a familial pastry made for big occasions and religious holidays. It is therefore made at home and in large quantities. Also, don’t be surprised, this cookie is neither too sweet, nor too big. Its consistency is rather dry but quite pleasant.

What is the origin of kleicha?

How to make kleicha and religious traditions

The preparation of kleicha doesn’t leave room for improvisation : it is a ritual. In the past, the cookies used to be baked on wood fire in the big communal oven. If there was no wood fire oven, they could also be sent to bakeries to have them baked. This traditional oven is called tannour, and this is the same oven used to bake khubz tannour, the popular flat bread.

The dough was once prepared in big bowls named nijana. Kleicha dough is a kind of bread dough that was kneaded for a long time until it gained elasticity.

Iraqi Christians generally made kleicha for Christmas and Easter. Christmas celebrates the birth of Christ while Easter celebrates his resurrection. Easter is celebrated the first Sunday following the appearance of the full moon after the 20th of March.

Until the middle of the 20th century, there was a strong Jewish community in Bagdad. These Iraqi Jews prepared date kleicha for the Purim holiday, celebrated on the 14th of Adar in the Hebrew calendar. This celebration usually takes place in March every year, but the exact date changes depending on the lunar calendar.

Traditionally, oznei aman are the same cookies but triangle-shaped. However, in Iraq, Iraqi jews made them round and called them ba’ba’ bit-tamigh.

The different types of kleicha

It probably is the most iconic biscuit from Iraq. However, kleicha is a pastry that requires a few tricks to succeed in making it. That is why the date versions are often left to be made by the elders, since making a smooth and thin layer of date paste is hard: it requires expertise.

Thus, many variants of kleicha exist, depending on the thickness of the dough and of the date paste.

In some households, kleicha are more swollen, more rounded and bigger. In others, they’ll be thinner, flatter, and will have more black layers. It is customary to exchange plates of kleicha between neighbors during the holidays : that is why they should be made with care.

Furthermore, kleicha can be found in different shapes : The walnut kleicha usually have a half-moon or crescent shape. It is not unusual to find date and cardamom kleicha with this shape as well.

Kleicha can also be found in a round shape. They are decorated with a specific wooden mold. This mold is called galab al-kleicha. 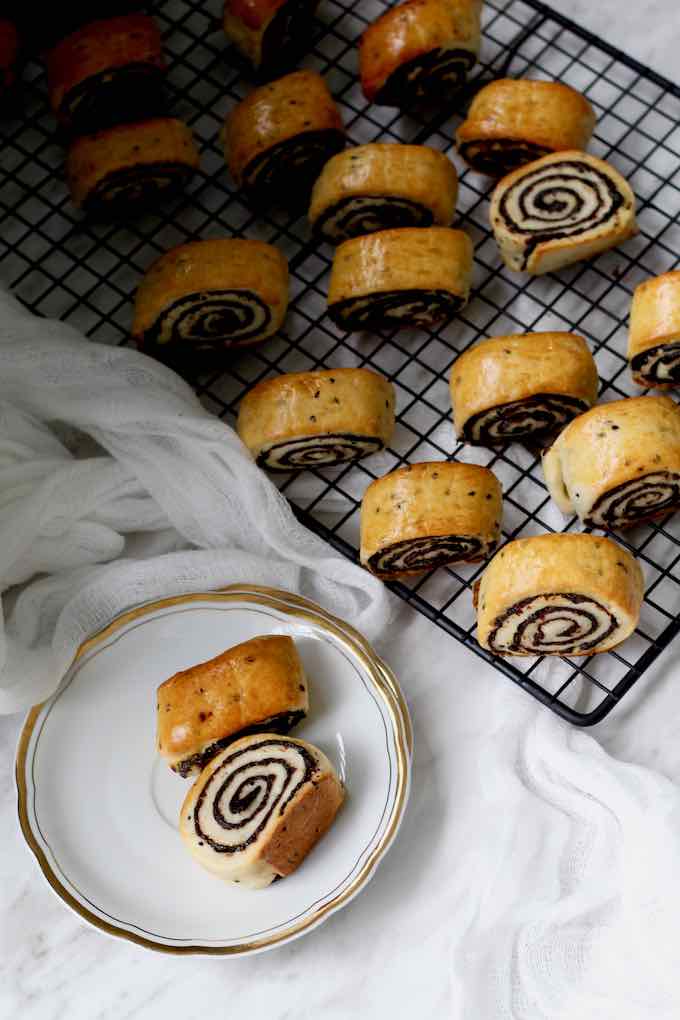 First of all, the kleicha dough must be nicely flattened. The main secret in the recipe lies in making a good cookie dough. Indeed, the dough must be flattened with a rolling pin since it will swell in the oven.

The cookies may seem small, but they will double, or triple in volume during baking. Thus, once the roll is made, it should be slightly flattened with a rolling pin for a longer kleicha.

Cutting tips The dough can be a bit sticky. It is therefore advised to put the roll in the fridge for five minutes before cutting the kleicha with a knife. That way, cutting the roll will be easier. Using a sharp, non-serrated knife to cut the cookies is recommended. The cookies will then be smooth and the contrast between the dough and date paste will be a success.

Baking tips The kleicha should have room in between them on the baking tray before being put in the oven. It is recommended to only place 10 to 12 kleicha on a regular 8×12 inch baking tray, otherwise the cookies will swell on top of each other during baking.

Kleicha is found under many names and in different forms. Kolompeh are found in Iran. Kolompeh are very popular in the Kerman region in Iran.

In Lebanon, Saudi Arabia, Jordan and Syria, kleicha are found under another name.

It is a variant of maamoul. Date maa’moul are known as menenas. They have a similar shape to kleicha. They are made during the two main Muslim holidays : Eid al-Fitr and Eid al-Adha.

Ma’amoul are small pastries stuffed with dates and walnuts, or pistachios (sometimes with almonds).

Unlike kleicha, the cookie dough does not contain yeast. Furthermore, in the maamoul dough, some fine semolina is usually added to the flour. They are decorated by hand and shaped with a wooden mold.

We hope that you will particularly enjoy this recipe. You can serve kleicha anytime during the day, with a Turkish cardamom coffee or even for breakfast.

This recipe is validated by our expert in Iraqi cuisine Nawal Nasrallah. An award-winning researcher and food writer, Nawal is the author of the definitive cookbook on the Iraqi cuisine Delights from the Garden of Eden. 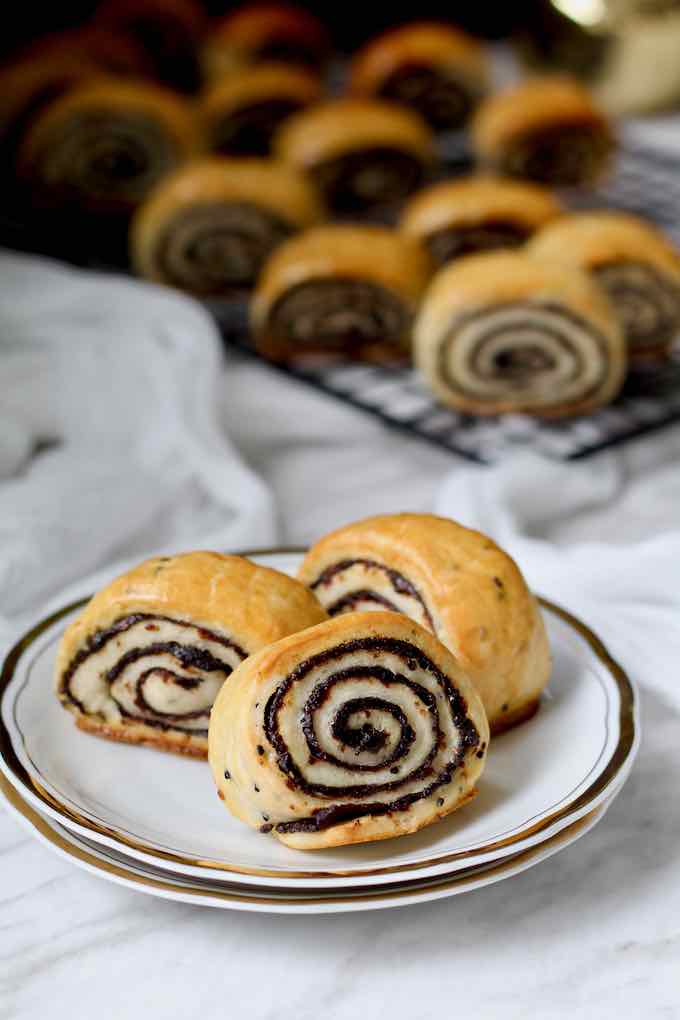 Read more: what dessert to make for christmas 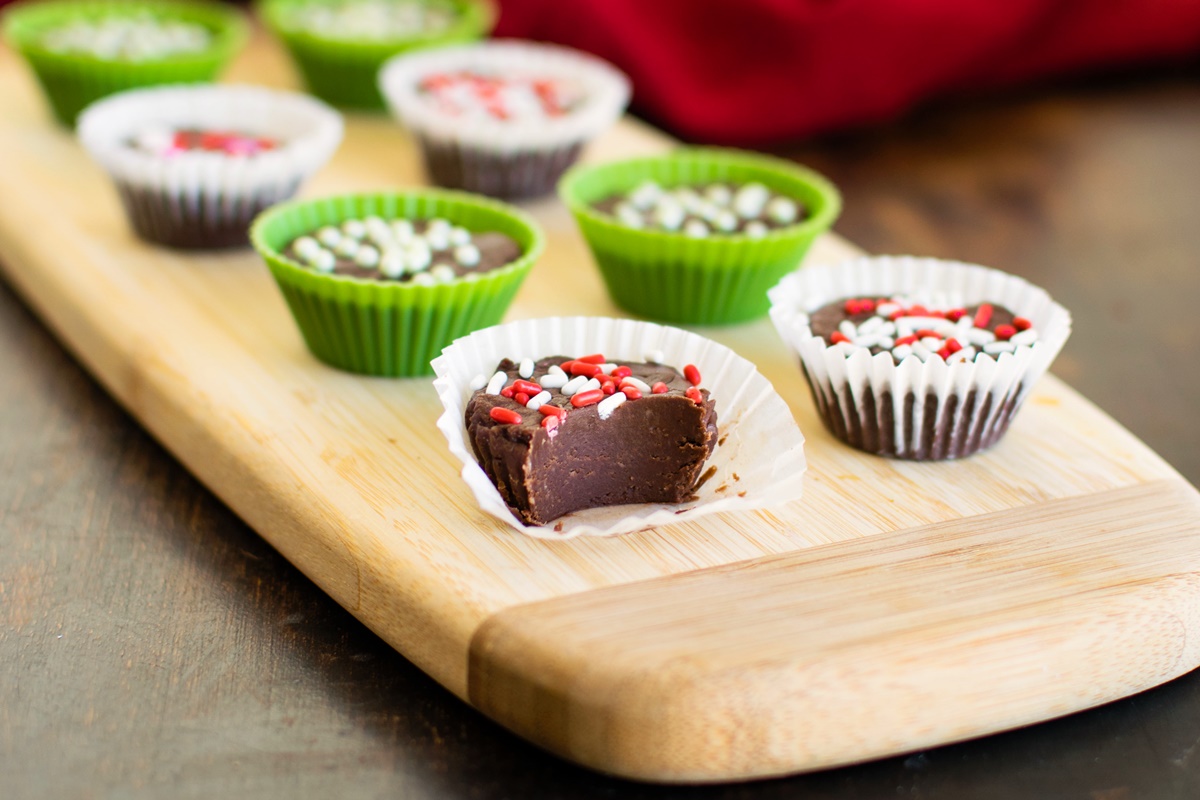