Whether it’s a holiday meal or a family dinner, few things beat the best slow cooker pot roast! If you make it right, it will be tender, flavorful and perfect for feeding a crowd – or storing as a freezer meal. This complete guide will cover the cut of meat for pot roast, tips for how to make it, how to fix tough pot roast, how to freeze low carb pot roast, and of course an easy pot roast slow cooker recipe!

What Kind Of Meat For Pot Roast?

The cut of meat for pot roast is pretty much the opposite of what you’d use for most other uses. There are 2 factors you are looking for:

So, what kind of meat has these characteristics? Choose one of these:

Can you use sirloin roast (from the back of the cow)?

Yes, but I don’t recommend it in general. It can still be tender, but is too lean, so you won’t get fall-apart tender pot roast. 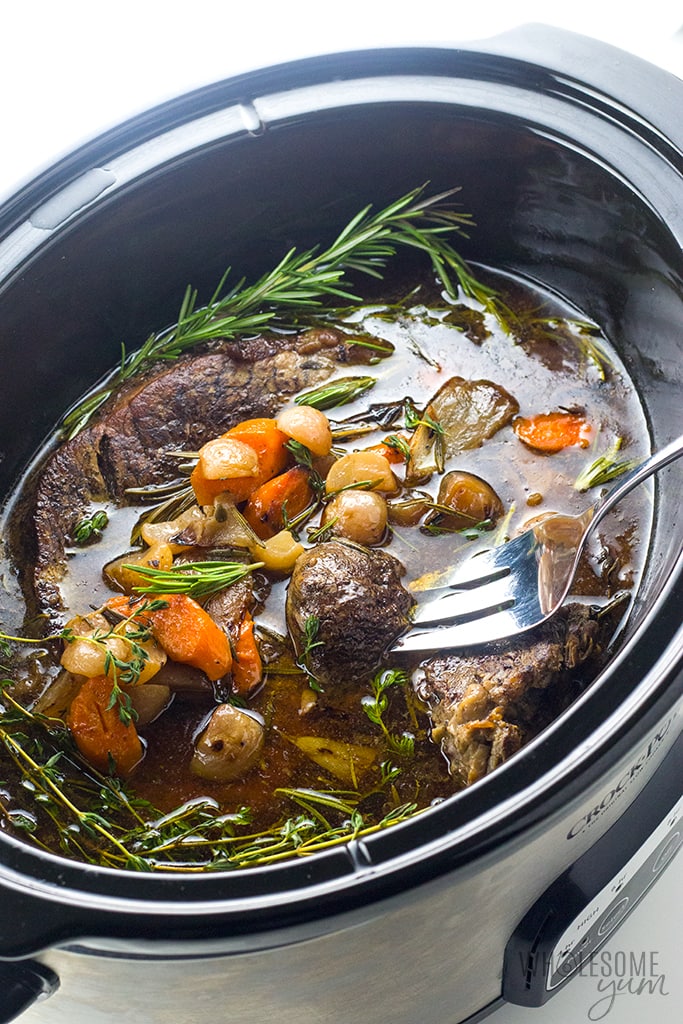 How To Make Pot Roast in a Slow Cooker

Fortunately, the process for how to make pot roast in a slow cooker is one of the easiest dinners you can make. Here are the basics:

The full instructions are on the recipe card below, but don’t miss the section on tips for the Best Slow Cooker Pot Roast!

So, what if you want to make pot roast low carb? The good news is, it’s almost naturally low carb. And, the

However, there are two main aspects to that can be carb-heavy with a traditional pot roast:

Otherwise, a keto pot roast or low carb pot roast is no different than any other pot roast.

Pot roast is pretty straightforward, and the best part is it’s a (mostly) hands-off slow cooker dinner recipe that you can leave alone while you do something else. I’m all about anything that saves me time cooking, especially when it comes to low carb dinner recipes.

But if you want the best slow cooker pot roast, follow these tips!

Use the right cut of meat for pot roast.

The best slow cooker pot roast needs the right cut of meat! See my tips above for choosing the best ones.

Use a heavy hand with the salt and pepper. You need more than you think for pot roast. 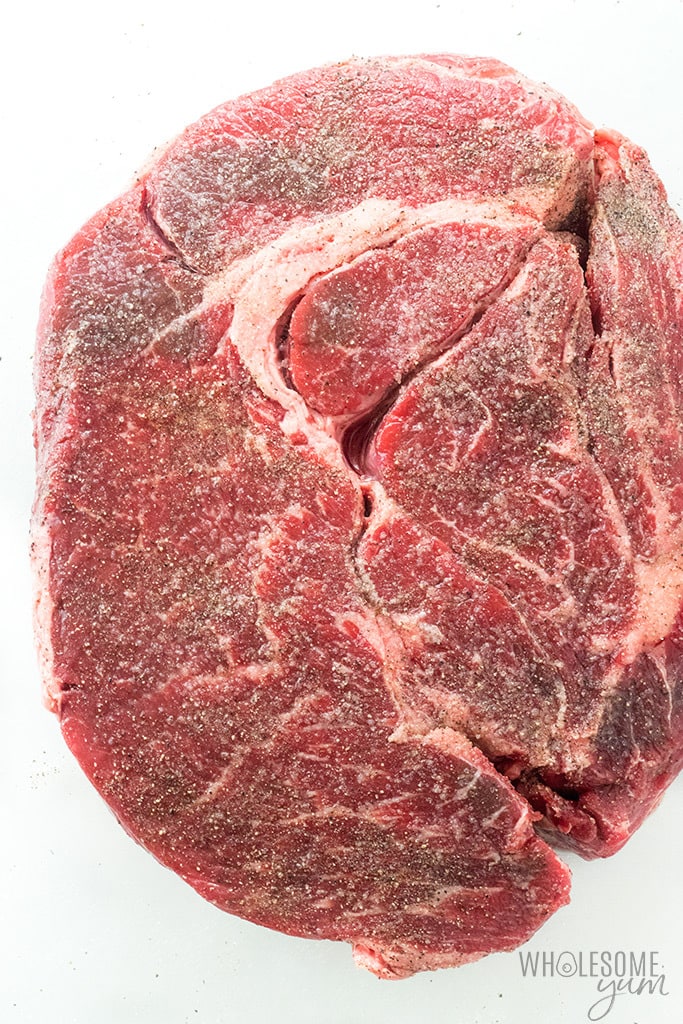 After you season the meat, then let it sit at room temperature for at least 30 minutes. This allows the meat to cook more evenly, which means a juicier and more tender pot roast.

You might think that the slow cooker will already be cooking the meat, so do you really need to sear it first? You do.

Browning the outside brings out tons more flavor. It’s super quick to do. Don’t skip it! 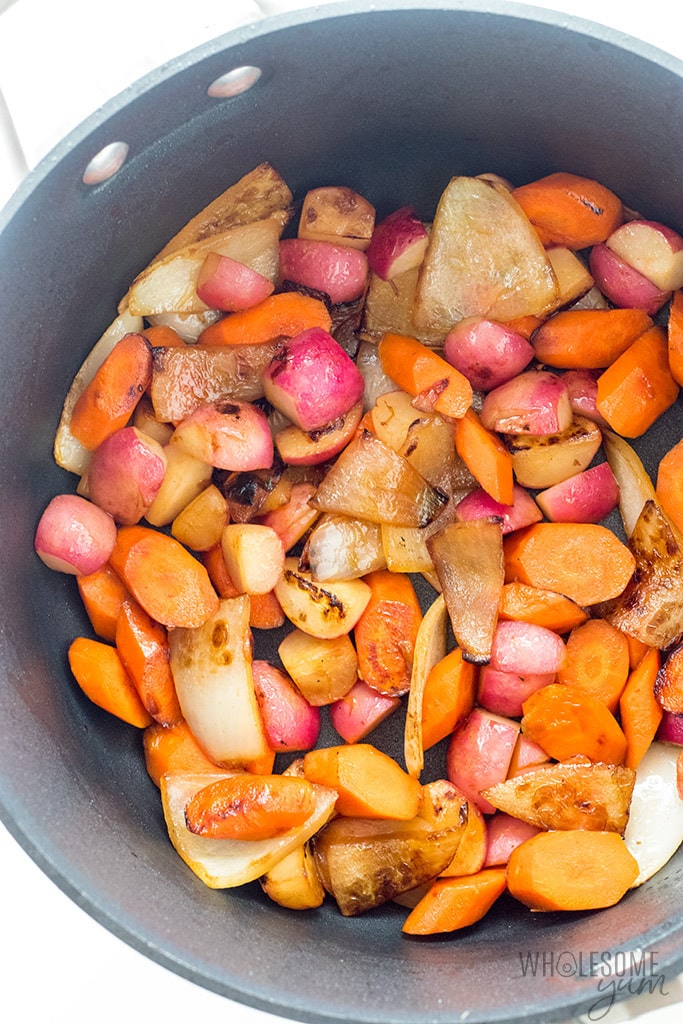 The same principle that applies to the meat is true for the veggies too. Browning them brings out flavor and makes them taste so much better!

Flavor, flavor, flavor. Everything about making a good slow cooker pot roast is about flavor! Heavier herbs, like rosemary and thyme, can stand up to the longer cooking time and yield a delicious result.

If you want to remove the herbs later, you can tie them together using kitchen twine for easy removal. However, I prefer to have them spread throughout the slow cooker. 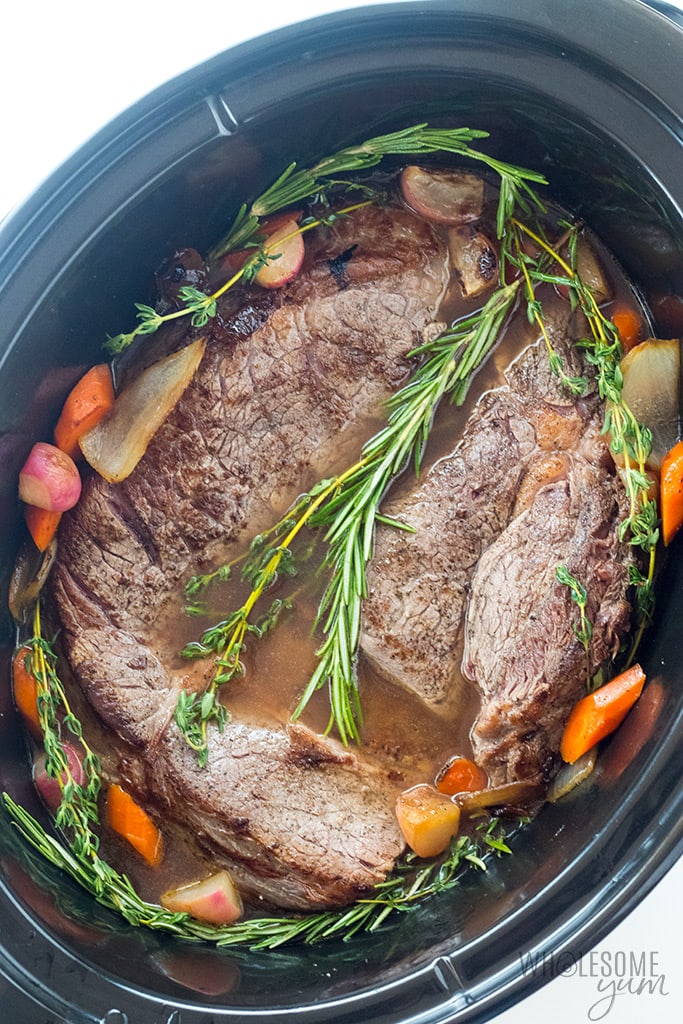 Any good pot roast slow cooker recipe should use broth. Do not use water!

You might already know this, but it might come as a surprise that bone broth works even better. It’s more rich and flavorful, plus it has the added benefits of collagen. It will tenderize the meat even more. And, the extra (good) fat is perfect for a keto low carb pot roast recipe!

Do not remove the lid.

You let steam escape every time you do that! And, if you’re making pot roast in a Crock Pot, isn’t the whole point that you can walk away and go about your day while it cooks?

Cook it for long enough.

This is the most important part! Don’t make the mistake of trying to remove the pot roast too soon. It will be tough and dense.

For tender, fall-apart meat, it needs to cook low and slow for a loooong time. If it’s too tough, chances are it needs more time to cook.

How Long To Cook Pot Roast In A Crock Pot

If there is one thing that makes pot roast tender and flavorful, it’s the cooking temperature and time. We want low and slow, for hours!

If you can, I highly recommend making slow cooker pot roast on low. A low temperature makes for the most succulent meat possible.

The cook time for pot roast in the slow cooker on low is 10 to 12 hours.

If you don’t have time to cook slow cooker pot roast on low, you can also do it on high. It’s still a slow cooker temperature, so will still tenderize the meat pretty well.

The cook time for pot roast in the slow cooker on high is 5 to 6 hours. 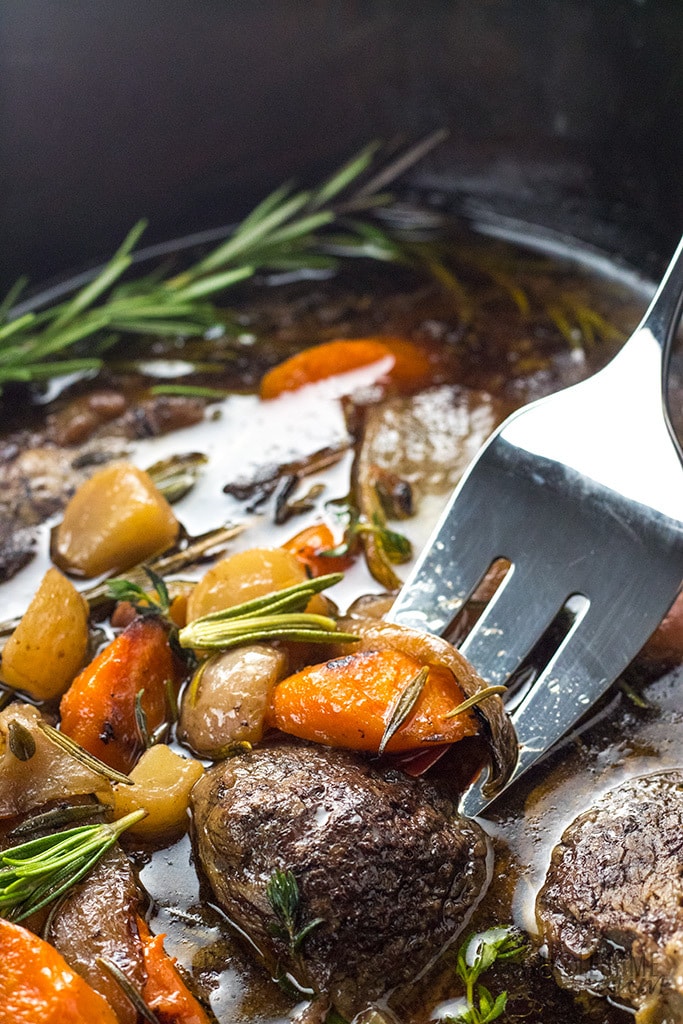 What To Do If Pot Roast Is Tough or Dry

The key to the best slow cooker pot roast is to allow it to cook for long enough. If your pot roast is not fall apart tender, chances are it needs more time to cook. It’s very rare that it’s overcooked.

How To Test If Pot Roast Is Done

How do you know if pot roast is done? Simply take a fork, stick it into the pot roast, and twist. If you can easily remove the meat, then it’s done. If not, keep cooking it!

How To Fix Tough Pot Roast

Signs of an underdone pot roast are meat that is dense, leathery, and does not shred or twist off.

If this happens, simply close the lid of the slow cooker and continue cooking for another 1 to 2 hours. Then, try the fork test again.

How To Fix Dry Pot Roast

Signs of an overdone pot roast are meat that is dry. Honestly, this is almost impossible with a slow cooker pot roast!

But, if your meat is dry, just baste it with the juices from the slow cooker and it should still be good. If it’s too dry to eat on its own, try making tacos with it. (Use coconut flour tortillas for a low carb version!) 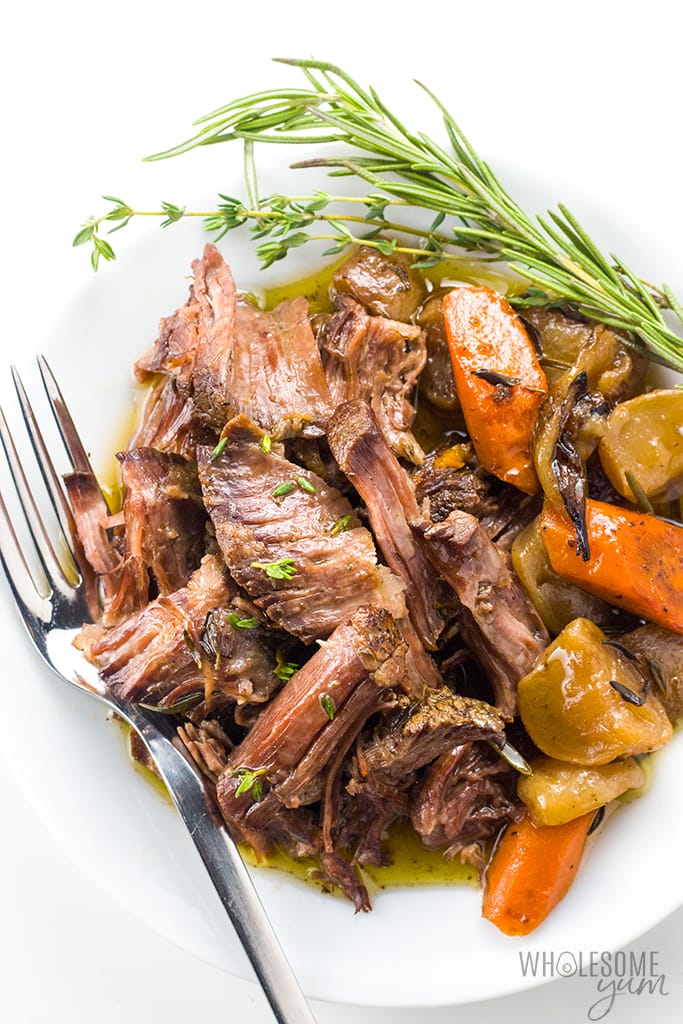 Can Pot Roast Be Frozen?

Yes, definitely! After you’ve cooked your pot roast in the slow cooker, shred it and let it cool to room temperature.

Transfer the shredded meat and veggies to freezer bags and top with the sauce. You might have some solids, which is okay, and it’s up to you if you want to include these. Either way, try to submerge the meat in the liquid.

Freeze the bags laying flat in the freezer. Once they are solid, you can move them around where ever it’s convenient.