Disclosure: Jones Dairy Farm sent me a semi-boneless, fully-cooked ham for this post and will be providing the product for the giveaway, as well. No other compensation was received. All opinions and photos remain my own.

Certain foods are expected to be paired with certain times of year. Burgers always make me think of long summer days spent swimming at my grandparents’ cottage at the lake and chasing fireflies at dusk. It wouldn’t be Thanksgiving without the turkey. Pile on the stuffing and mashed potatoes, please. And when it comes to Easter, there is no finer pairing than ham. We may not always celebrate Easter on Easter (yes, my family is weird), but you can be guaranteed that when we do, ham is what’s for dinner. It’s not every day we have ham. So when Jones Dairy Farm asked me if I wanted to make one of their hams and share it with my readers, I jumped at the opportunity. I usually am visiting someone else’s house for Easter instead of playing hostess-it was my turn to spin the tables around. I’m glad I had the chance to show how foolproof it can be, especially when you’re starting with a high quality hog. Jones Dairy Farm makes it so easy!

My bone-in ham arrived in its own little ice chest, wrapped and tied like it was a special gift just for me. Did you know that you can order a Jones Dairy Farm ham to be shipped to your own door, too? In fact, I’ll be giving one away at the end of this post! 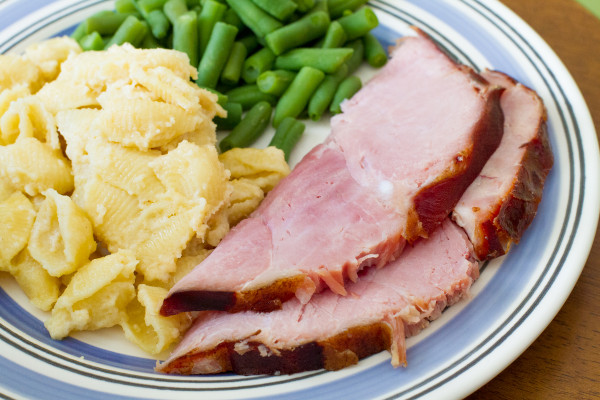 We couldn’t believe how BIG our ham was. It weighed in somewhere around 16.5 lbs and measured nearly 14″ long. We named it-because we’re a little strange around here-Hamilton Porkington I. The kids couldn’t wait for me to cook it up. It was torture waiting until I had the time to plan a proper feast. Feast day came and we prepared. My wall oven is too small for my roasting pan-the downside to not having to bend over-so I actually own an electric roaster. It’s something like a huge crock pot that normally lives in the basement when it’s not being used. I unwrapped Hamilton and took him in for all his glory. Wow! Now that was a piece of meat! The aroma already was enticing without heating him up! Because the ham is fully cooked, the time it spends in the oven is just really to reheat it. You don’t want to use too high of a temperature or cook it too long or you’ll dry your ham right out, which would be a very sad thing. So let’s not do that, okay?

After preheating my roaster, I placed Hamilton fat side down on the rack, covered, and set the timer. When there were 40 minutes left of heating time, I added the glaze, brushing it on a second time with 20 minutes remaining. The leftover glaze goes on top right before removing from the roaster to ensure a little bit of sweetness remains. It’s not necessary-you certainly don’t have to glaze your ham at all-but it’s a nice little touch of specialness. 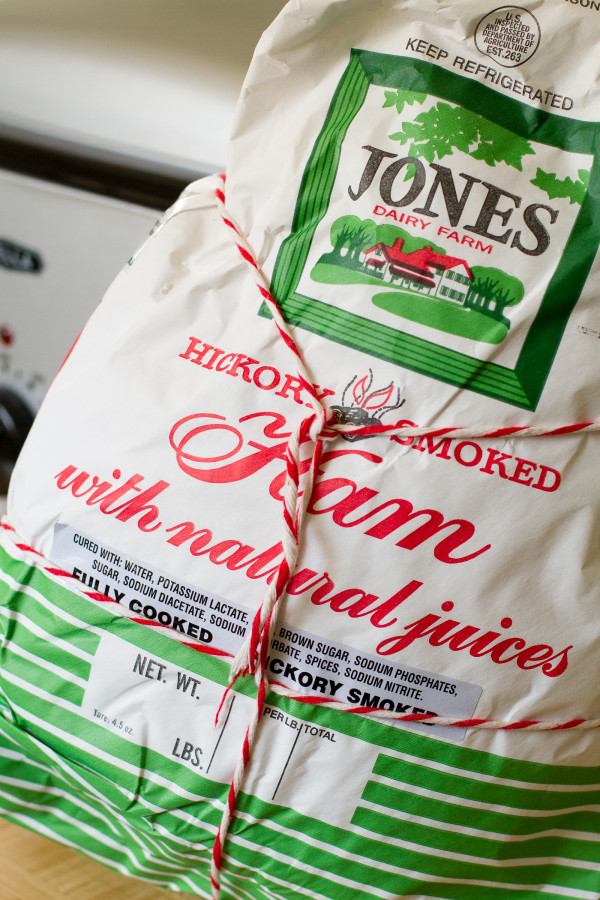 When you’re ready to carve, put a towel on your counter and place your cutting board on top of that. This helps in two ways: it’ll stabilize your cutting board and catch any drippings. If you have a cutting board with channels in it, I highly recommend using that. My biggest cutting board does not. Let your ham rest for 5 minutes before carving for maximum moistness.

Despite my knife skills class at The Culinary Institute of America in February-including a lesson on carving ham-I’m still a novice. It’s going to take a bit more practice to get the hang of this. Luckily, there is an excellent video on Jones Dairy Farm’s website to help you when it comes time to carve. I know I referred to it several times before I pulled my knife out. The most important part is to ensure your knife is sharp. Otherwise, you run the risk of cutting yourself in the process, and nobody wants that to happen.

Ta-da! There you have it! Easy, peasy, and so darn tasty! Now I know you want your own ham, too, for your Easter table! The folks at Jones Dairy Farm have graciously offered to send one to one of my readers and all you have to do is enter in the Rafflecopter box below. This contest will run through Friday at 11:59PM to ensure there is enough time to get your ham to you before the holiday. Good luck! Note: contest open to residents of the United States only.

Through this article, we hope to help you understand Cooking ham in electric roaster