Smoked Chuck Roast vs Brisket [2022]: Which Cut Is Better In Quality?

As the summer approaches, the time for grilling and roasting delicious cuts of meat gets ever closer. But some people have started to turn away from the classic grill featuring burgers and sausages and are turning towards steaks and slow-cooked slices of meat.

When it comes to slow-cooking and smoking, battle lines are drawn with the age-old fight of smoked chuck roast vs. brisket.

You may think that anything smoked or slow-cooked will automatically be delicious – why worry about the cut of meat? We’re going to have to stop you right there, dear reader, because the meat you use in your smoker is essential.

This is why the smoked chuck roast vs. brisket debate rages on between grill kings the world over. While both are absolutely delicious, they both have unique flavors that give them distinct characteristics.

Read on to find out more – first of all, though, let’s have a look at the main differences between smoked chuck roast vs. brisket.

The main differences between Smoked Chuck Roast vs. Brisket are:

Smoked Chuck Roast – Everything You Need to Know 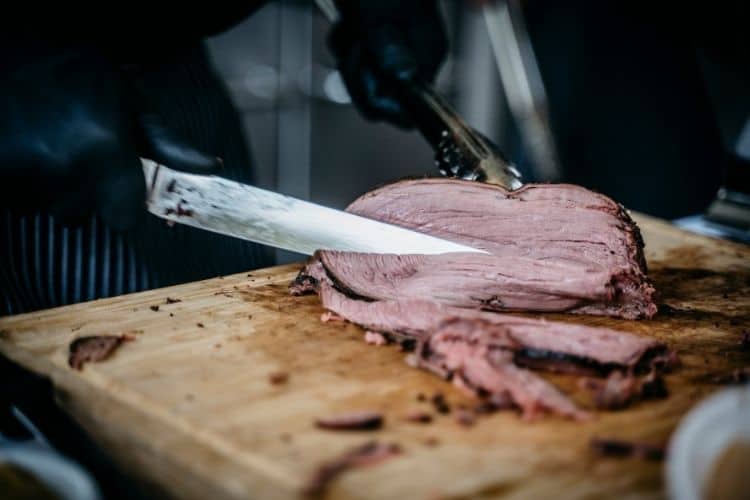 First and foremost, it’s worth noting that smoked chuck roast is the finished product – after hours at the smoker, you’ll end up with a smoked chuck roast. But before you put it in, you’ll have what’s known as a beef chuck.

Beef chuck is taken from the cow’s shoulder and is frequently used in pot roasts. As it is an area of the animal that moves a great deal, it can end up being a tougher cut – but it also has flavor in abundance. It’s beautifully marbled and has lots of great, beefy flavors all the way through.

It has to be said, a fully-sized smoked chuck roast looks incredible. It’s a literal block of beautifully marbled meat, sometimes replete with a beautiful trim of fat on it too. You may wonder if you’ve bitten off more than you can chew when you first see a beef chuck, but we can guarantee that you’ll make quick and easy work of it!

What sort of flavors does a Smoked Chuck Roast have? 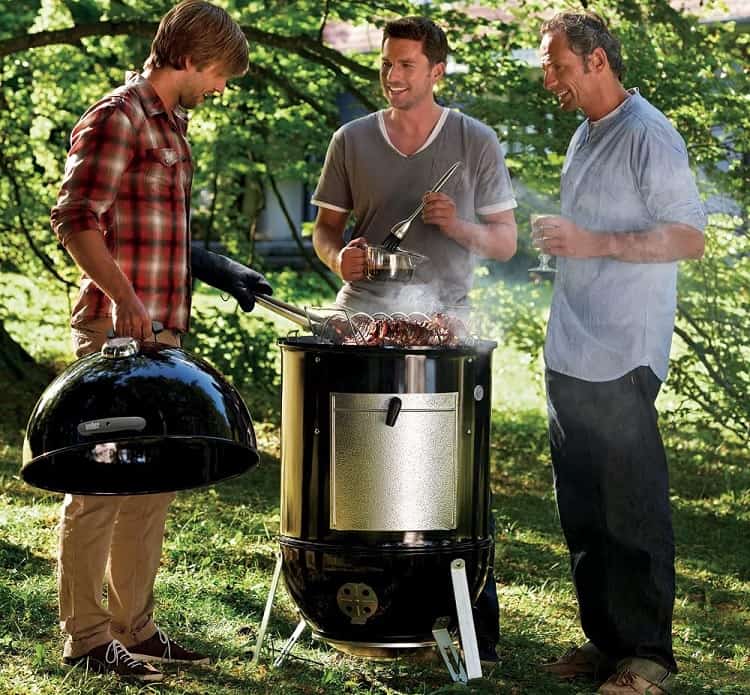 We are firm believers that anything you smoke in a Weber Smokey Mountain smoker will end up being lip-smackingly delicious. And when it comes to cooking up a smoked chuck roast, it’s no different.

Many people are tentative when it comes to this particular cut, as the shoulder gets a lot of use in the animal’s life, but when you slow cook a beef chuck, all the fat, collagen, and connective tissue break down, which seeps these exquisite flavors into the meat itself. Beefy, buttery, smokey – you’ll want your smoked chuck roast to last forever!

I’ve bought my smoker – but how much will a Smoked Chuck Roast cost?

Bear in mind that you’ll often need at least 4-5lb if you’re feeding a crowd, though, so you could be looking at $20-$25. Sounds like a lot? Well, keep in mind that that size piece of beef chuck will feed 8-10 people – and still have some for leftovers!

I’m all in – so how do I go about cooking a Smoked Chuck Roast?

The best way of cooking up a smoked chuck roast is using a smoker. We couldn’t recommend the Weber Smokey Mountain smoker enough, but the Char-Broil Offset Smoker is also a brilliant device for getting the perfect smoked chuck roast.

Here’s a guide to getting the ultimate smoked chuck roast.

Brisket – Everything You Need to Know 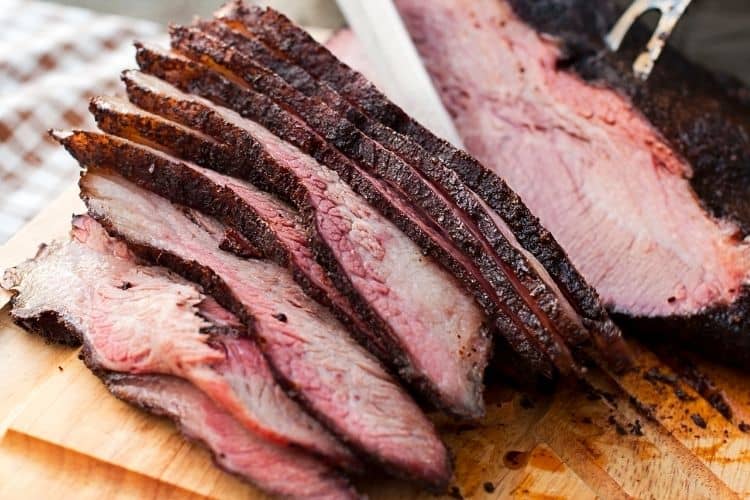 Brisket looks surprisingly similar to smoked chuck roast, actually – it’s a large, hefty chunk of meat. However, one noticeable difference is that brisket doesn’t have as much intramuscular fat marbling throughout it, often only having a little rim of fat on one side. And this little slither of fat has, in fact, caused many ruffled feathers in the grilling world, as people disagree with whether it goes in with the fat up or down!

If you cook your brisket to perfection, you’ll end up with a gloriously meaty, beefy treat, which will quite literally melt in your mouth. Replete with absolutely stunning crispy edges and plenty of juiciness inside, it can be an absolute stunner.

However, be wary, dear reader – if you end up overcooking your brisket, you’ll end up with a relatively dry and chewy piece of meat, which is not what anyone wants. Practice makes perfect with this showstopper, though, and as you’ll find out, it’s not going to break the bank if you slip up!

How much does Brisket cost?

Here’s a bit of good news for you all – brisket only costs around $3-$4 per lb. That’s right – it’s an absolute bargain if you get it right! You do have to consider that brisket often comes in relatively large sizes – for instance, an average brisket is around 10lb. Though don’t worry about the costs racking up – a brisket that size will not only feed your bbq party but keep you fed for days after!

How do I cook a Brisket? 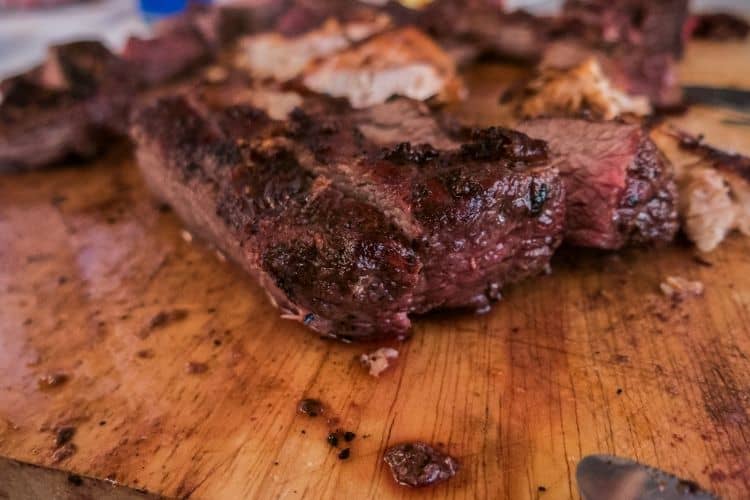 Like with the smoked chuck roast, brisket can be quite a tough piece of meat and benefits from an excellent long cook to break down all the connective tissue and the fat, making a lovely tender meal.

We recommend using a smoker (such as the Weber Smokey Mountain) to cook your brisket to perfection. You’ll also want to get your hands on the best grilling accessories to help you on your journey to brisket perfection.

Here are our top tips for cooking a brisket in a smoker. 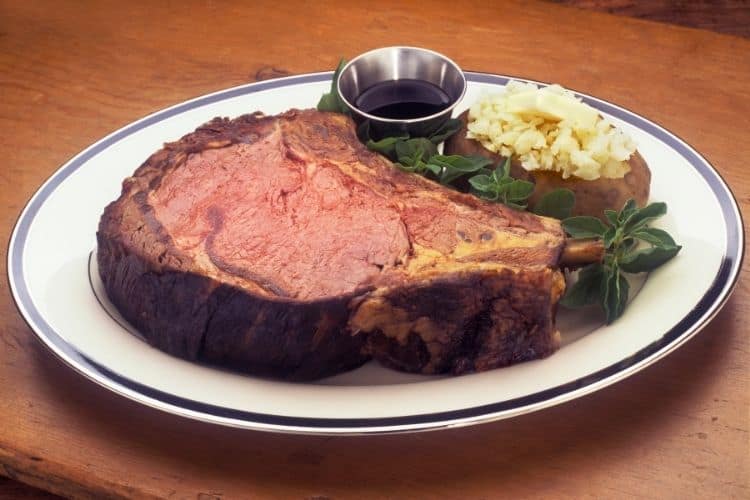 These two cuts certainly aren’t for everyone. Here are some worthy contenders that you can try out.

If you want something big but don’t have the time to smoke it, the prime rib could be your answer. And it packs more flavor than a ribeye too!

is a meaty classic that isn’t quite at the echelons of the sirloin but is making waves and has an immense flavor.

A worthy alternative to the brisket in size and flavor – plus much quicker to cook too!

Let’s look at some of the more commonly asked questions surrounding Smoked Chuck Roast Vs. Brisket.

So there you have it – two succulent, smokey slabs of sizzling steak, alike in both dignity, flavor, and value. The choice is yours at the end of the day – but we’d personally recommend starting with a brisket if you’re going to take the plunge and build up to the smoked chuck roast.

Which one is your favorite? Leave us a comment below and let us know!