This Sour Cream and Bacon Potato Salad has been our family favorite for many years. It never disappoints!

The first cookbook that was ever really mine was ‘The Better Homes and Gardens ‘New’ Cookbook’ published sometime in the 70’s. And the first recipe I made from it was this Sour Cream and Bacon Potato Salad; and it’s been my favorite ever since.

It was and remains a great primer with some basic information for all cooks including weights and measure and substitutions but by today’s standards it would most likely earn nary a consideration by many cooks. No big celebrity or chef endorsements and few photos; nope…just some great basic recipes.

Many I’ve made time and time again that are still favorites including a Hamburger and Baked Bean Casserole that was a staple when my kids were growing up, my favorite Strawberry Pie that I have updated a bit, and this perfect Sour Cream and Bacon Potato Salad.

Truth is, that particular book was in storage while my life is in limbo in 2013 and I’ve still yet to unpack all my books here but I’ve made it so many times over the years, I’m sure at least once every summer, that it’s now simply held in my heart.

I’ve made it to woo a boyfriend when I was young, made it for picnics with other young marrieds, made it for barbecues held at my home and made it for my daughter’s backyard graduation party. Most recently it was made for a group of neighbors getting together on Sunday afternoon for some burgers off the grill and this was, as it often is, my contribution. 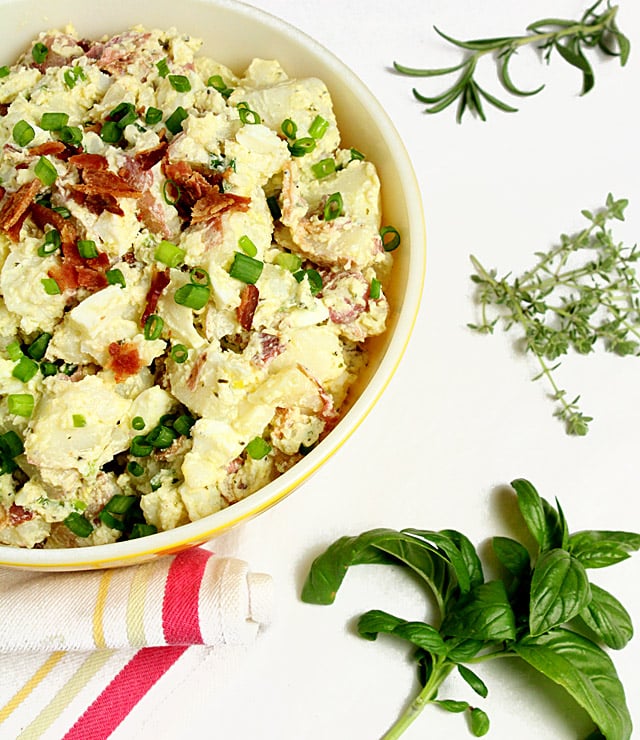 I could have called it ‘The Best Potato Salad Ever‘ for I really think it is…and I’ve made some changes over the years that I want to believe have enhanced the original. No longer peeling Idaho potatoes, I simply cut up and use red potatoes, skin and all (what a timesaver LIFESAVER!).

Where I once followed the recipe exactly and use bottled Italian salad dressing to marinate the potatoes after they cooked, I now prefer to whisk together some bacon fat (oh yeah), olive oil, vinegar and herbs from the garden for an even fresher (and better) taste.

I did learn through experimentation though that as good as balsamic vinegar tastes, it’s not a good choice. Tan potato salad is just not so pretty! Still the main ingredients rule…some egg, some bacon, some sour cream and no, doggone it, whoever decided that it belongs there anyhow, RELISH. No. None. Zip. Nada. Zilch. 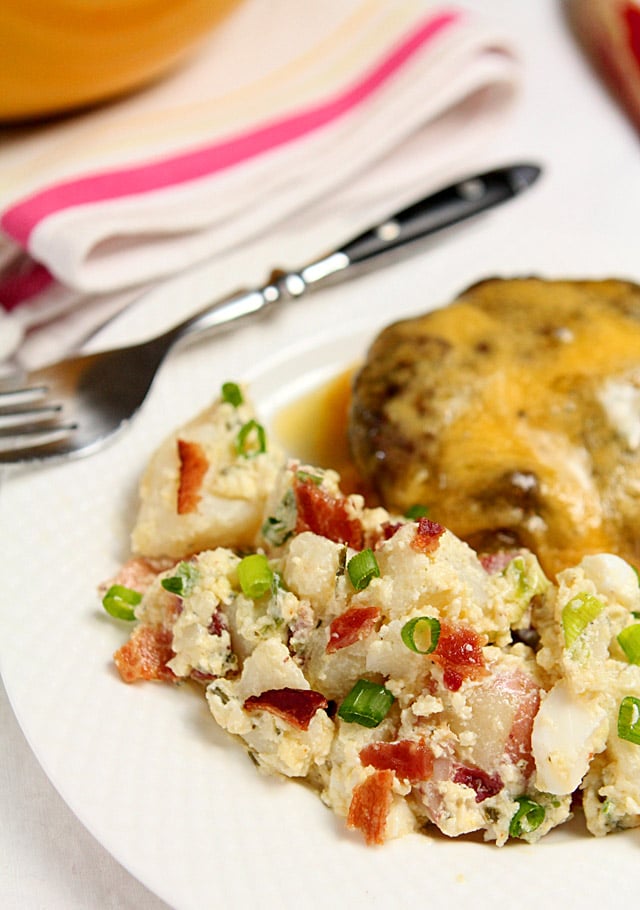 By the way did you know that old fashioned Pyrex bowls are a BIG DEAL? My daughter and her friends hold swaps, yearn for ones they see on Pinterest and there are definitely bragging rights if you score a set like you see in this post. These belong to my friend Karen who let me borrow them for this old fashioned recipe that is still my favorite today.

Did she know anything about how popular they’ve become? Heck no, these are simply a wedding gift that they have now used for over 30 years! Who knew? Certainly not Karen. Or me. How about you? Are you one of the new Pyrex fanatics? It seemed most appropriate to use these bowls; they and this recipe are of the same generation and they are a great example of ‘What’s old is new again.’ Try it…you’ll see, it’s the BEST!!

If it’s Thursday it must be time for the Food Network #SummerSoiree. Today it’s one of my favorites; potato salad. I love this potato salad and others too and imagine I’m going to want to make every single dish on this list from our other contributors. Perfect time of year and enough barbecues and picnics I bet we could do just that! 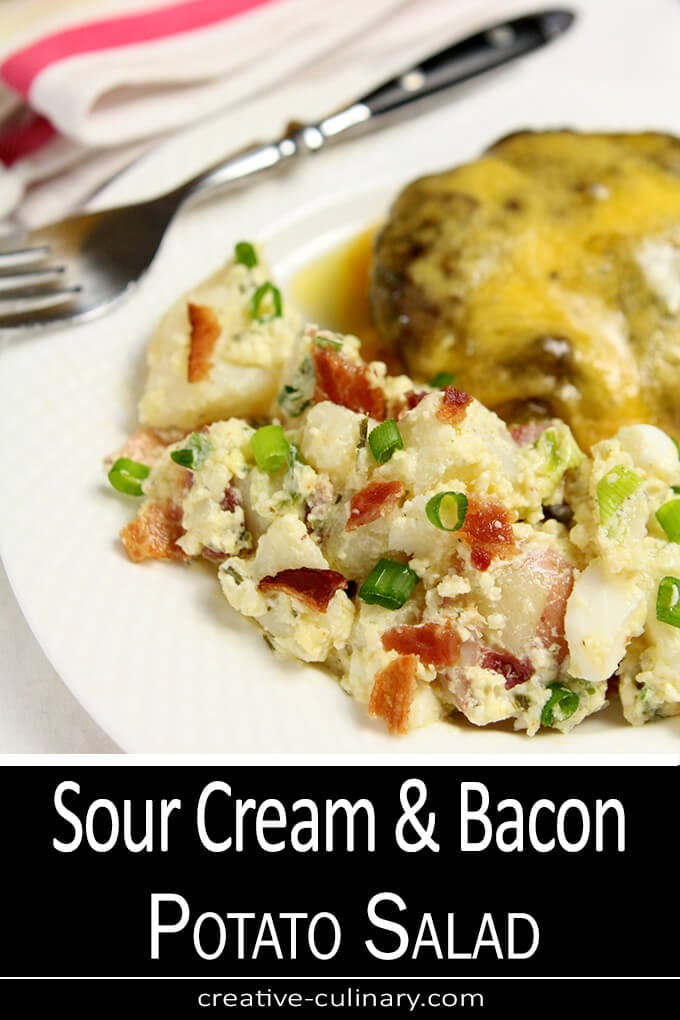 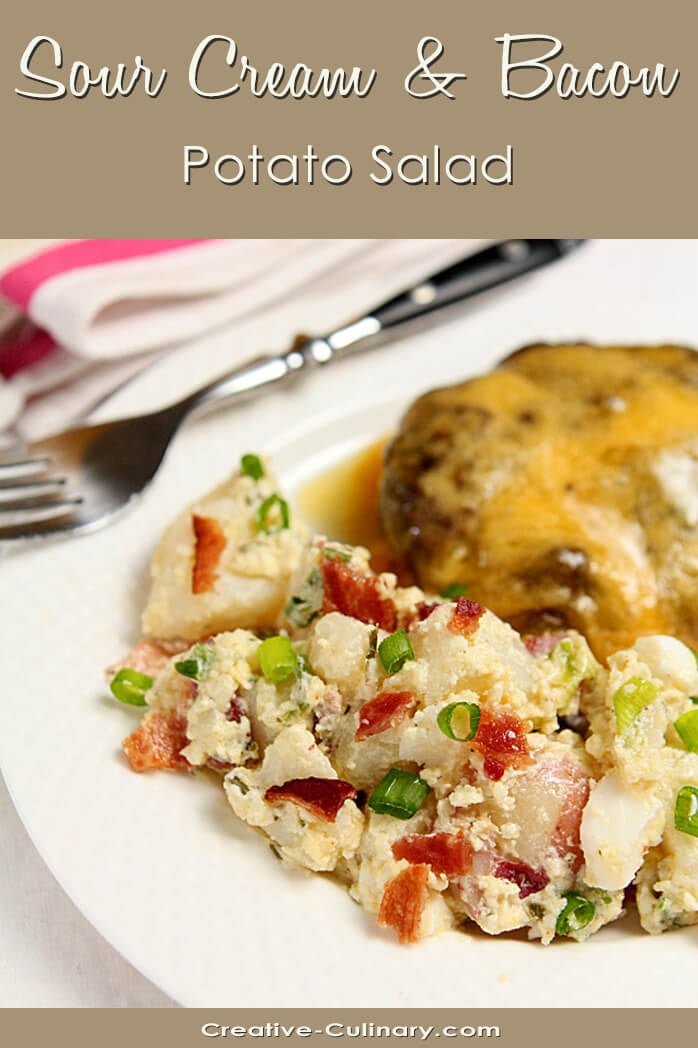