This is a vegan recipe for dan dan noodles you won’t be able to stop eating! Chopped mushrooms replace the ground meat and bring earthiness to this spicy, nutty and tangy noodle dish. It’s yummy!

Sometimes vegan recipes are just better than ones that contain meat.

The more I cook vegan dishes and the more I can see that certain dishes are just better without meat. Even ones that traditionally use meat, such as the classic Chinese dan dan noodles. I used to order it all the time and didn’t mind the ground pork, except for the chewy rubbery bits that come with ground meat dishes. I never really liked that.

Then one day I decided to make my own dan dan noodles and replace the ground pork for finely chopped mushrooms. And I never looked back.

Using mushrooms impart so much earthiness and umami to the dish, and they lighten it too! Mix them with a sauce packed with spicy, pungent, nutty, and sour flavors, and you’ve got yourself one outstanding bowl of noodles.

I think you will absolutely love these vegan dan dan noodles once you try them!

What are dan dan noodles?

Traditional Chinese dan dan noodles (担担面) are a mixture of chili oil, ground meat, sauce, leafy greens and noodles. And, while many versions of this dish abound, the one overarching similarity between them is that they’re usually quite spicy!

Many recipes will call for the use of Sichuan peppercorns. Those are the face numbing peppercorns you’ll also frequently find in recipes like mapo tofu.

Well, it’s gotta be said that I’m not a big fan of the mouth numbing qualities of those peppercorns. For me they tend to hijack all other flavors.

So I left them out of this mushroom dan dan recipe.

That said, if you love it numbingly spicy (I’m looking at you, Ben), then feel free to add them!

However, for this vegan version, I’m keeping it simple-to-make with a recipe that is more on the dry side of things. You’re absolutely gonna LOVE how easy it is to whip up at home! 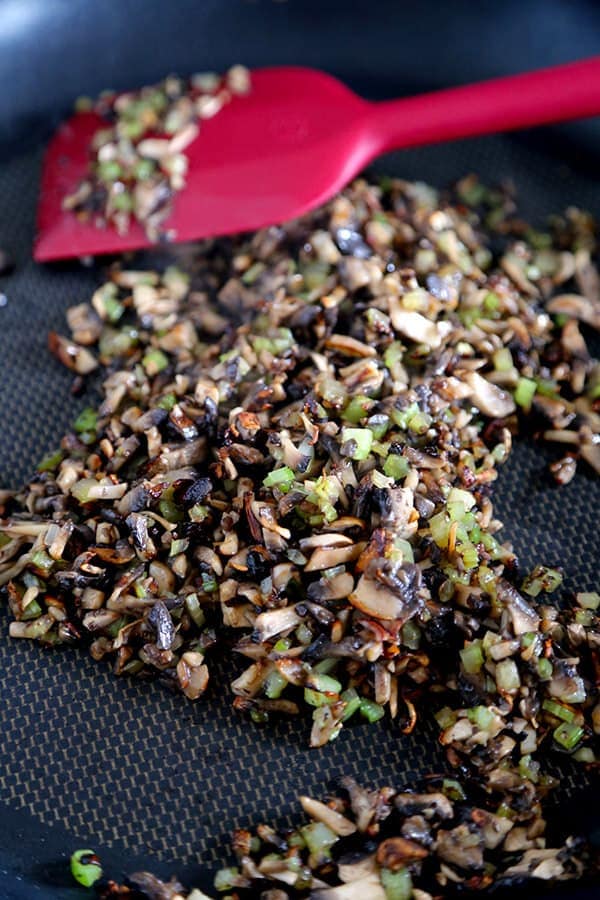 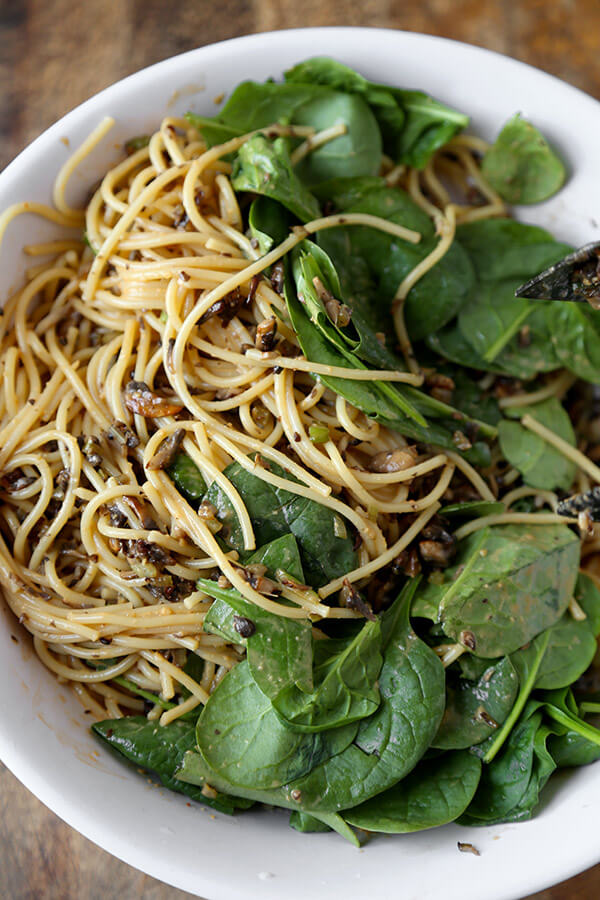 How to make dan dan noodles

Adding the baby spinach last makes the leaves wilt just enough that they don’t get soggy or watery. Noodles, celery, mushrooms, and spinach are tossed in this nutty, spicy, sour, sweet, and salty sauce to create one amazing vegan dan dan noodle dish. 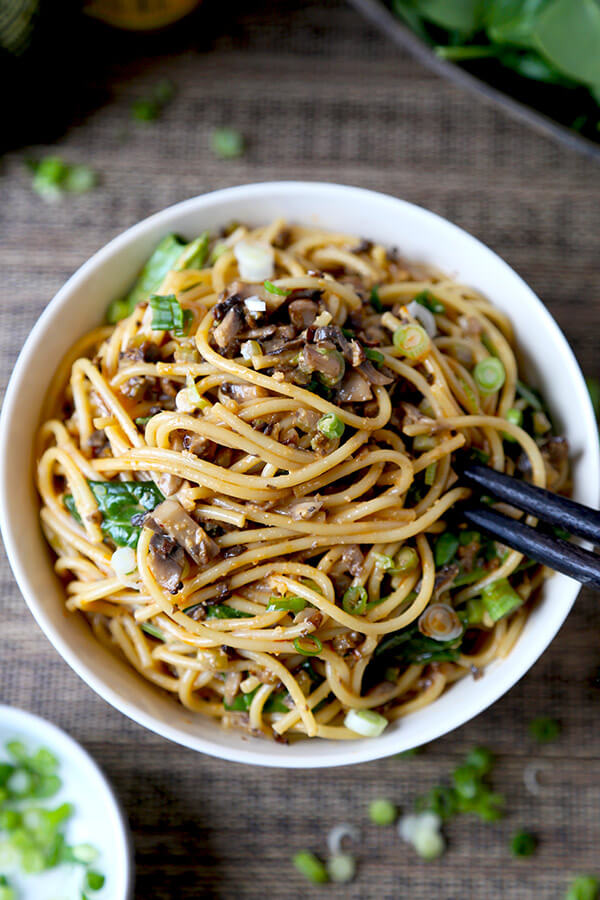 What does dan dan mean in Chinese?

Dan dan noodles got their name from the pole that traditional Chinese noodle sellers used to carry when hawking their yummy wares to a hungry populace.

A dan dan was a carrying pole that had a container at each end. One was a basket of noodles – and the other was a container of sauce. The noodle sellers would hike the pole onto a shoulder, balancing the containers on each end. When someone ordered noodles, they’d serve them up and then move on down the road.

Well, it’s not uncommon in food history that the name of a dish is set by the populace that savors it. Sure, pole carried noodles doesn’t have much of a ring to it… But dan dan noodles sounds just right! 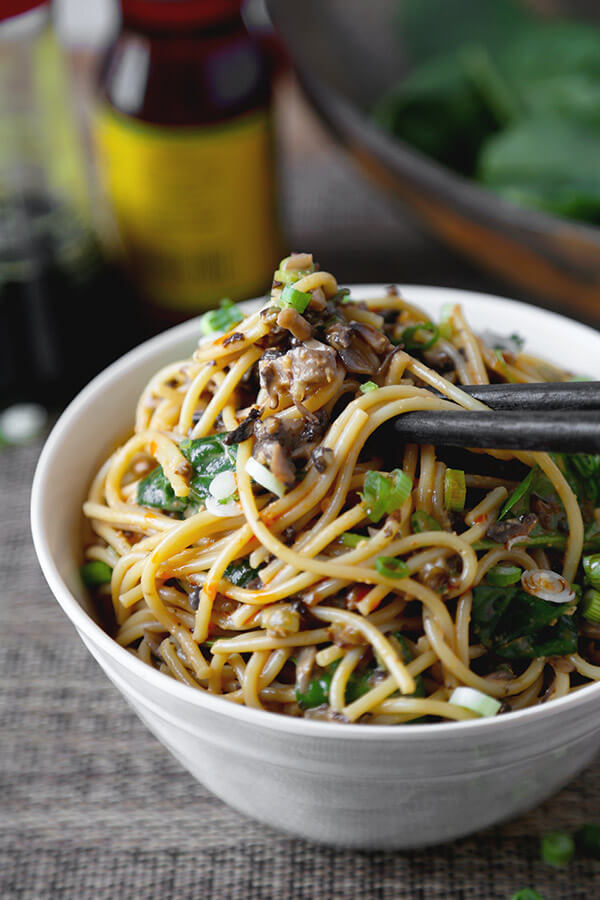 Now, you may have tried dandanmien on an epic trip to China – or at your favorite neighborhood Chinese spot.

But I bet you’ve never tried them with mushrooms instead of meat.

Let me tell you, mushrooms create such a savory, umami flavor and texture in this Chinese noodle recipe – that you won’t miss the meat at all!

Serve these vegan dan dan noodles as a main or a side. They taste their best when made fresh but are still delicious cold (after being refrigerated) – or give them zap for a few seconds in the microwave. 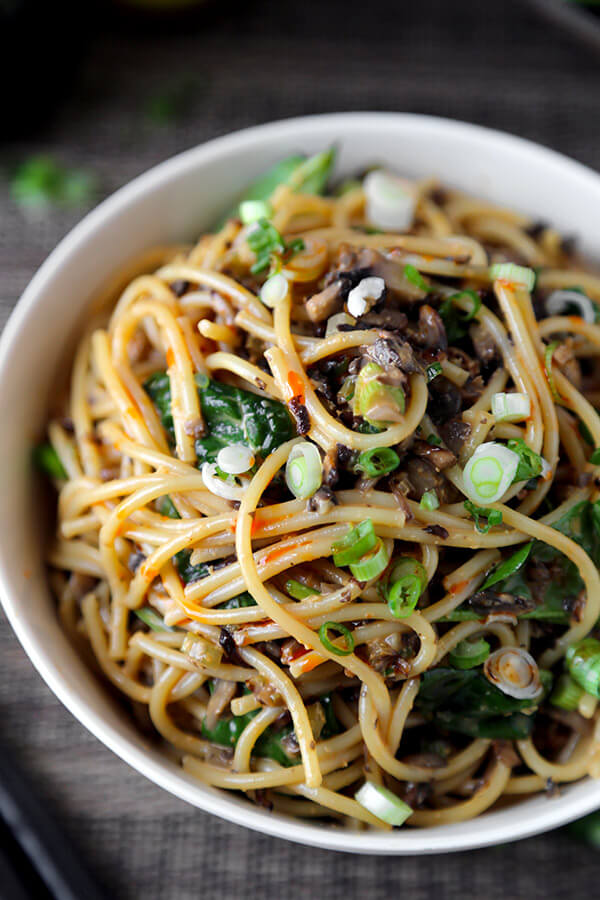 Pickled Plum is a participant in the Amazon Services LLC Associates Program, an affiliate advertising program designed to provide a means for sites to earn advertising fees by advertising and linking to familycuisine.net.

How long to grill a porterhouse steak