Few people know I was a mean propane filling machine in my high school days at Taylor Hardware. As a result, I know a few things about tank tare weights (an empty tank’s weight) and other propane lingo.

For the last 7 years I had my trusty Weber grill hooked into a 500 gallon underground tank at the house in Taylors. When I moved earlier this year to an all-electric house I had to switch back to a standard 20 lb BBQ grill tank. I also considered 30, 33, 40, 60, and 100 pound cylinders, to avoid refilling as often. I found that new 30 or 33 lb cylinders are at least double the price of a 20 lb, and finding lightly used ones on Craigslist wasn’t happening.

A Little About Propane Tanks

These “20 lb” tanks are designed to take up to 20 pounds of propane. You may get a pound or 2 less, depending on the temperature of the tank and surrounding air when the tank was filled. Cooler = more propane in, hotter = less in. Tanks can actually fit another 20% in the tank, but that extra space is designed for expansion as the temperature rises.

In very cold winter climates, like Canada, there may be more concern/rules about filling a tank to a complete 20 lbs. This is because if you leave a tank outside in very cold temps, filled the tank when the tank is cold, and then bring it into a hot basement/garage for a space heater, the gas will expand as the tank warms. With enough of a temperature increase, the tank’s pressure relief value will release a bit of gas. This would be less of an issue if the relief value were bleeding to outside air.

There is also a month and year on the collar indicating the date the tank was made. For 20 lb propane tanks, you have 12 years from the manufacture date before the tank must be re-certified with a new date stamped on it. The re-certification only adds 5 years before having to re-certify again. The cost and inconvenience of re-certifying almost always outweighs the price of a new tank.

Brand new propane tanks may come with air inside and need to be “purged” before the first fill. Some newer tanks, like Bernzomatic, will have a sticker on them saying they don’t need to be purged within 6 months of the manufacture date.

Purging requires a special adapter to allow a small amount of propane in. The pressure then pushes air out of a one-way bleeder valve. Purging may add another $3-4 dollars to a new tank, though some places don’t charge, especially if you buy the tank from them.

The Math on Refills at Costco

I called around and the local U-Haul place wanted $16 for a refill. I remember Costco has a sign for $9.99 refills. I thought I was getting a great deal, but it turns out I pretty much got no deal. 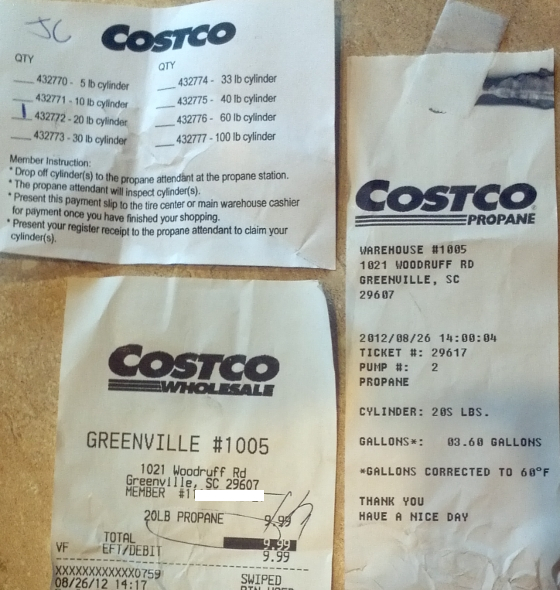 Costco in Greenville, SC is a bit deceiving because they first hand you a slip that says “20 lb cylinder”. When you pay inside the receipt says “20lb PROPANE”, and the filling print out says “Cylinder: 20S lbs.” The only defense is that the filling print out is honest and says “3.6 gallons”. However, nobody knows off the top of their head that a propane tank is supposed to have 4.7 gallons to be considered “full”. By saying 3.6 gallons, they are masking the fact that they put in 75%. If they wanted to be upfront they’d say “we will put 15 lbs of propane into this 20 lb cylinder”.

This means Costco puts in 15 lb of propane.

or, said another way

The word on the web forums is that the Blue Rhino and AmeriGas similar exchange services put in 75%, or 15 lbs.

If you do the math on Costco, it’s actually not a bad price. It’s in line, if not cheaper, than paying $16 for a full 20 lbs. Though, Costco’s use of the “20 lb” phrase is unfortunate. I think their motivation is to have a cheaper price, so members think they are getting a great deal. Plus, by only filling 75% they make members come back more often, and go inside to shop while they wait.

I also assembled the grills at Taylor Hardware. Weber Grills were by far the best we sold. Reasonable care and a cover will easily give your Weber grill 10-20 years of life. You can buy other cheap brands and they will have steel parts that rust out in 2-3 years. You can buy a fancy looking stainless steel brand from Home Depot and it will likely not rust, but it will cook unevenly or the handle or wheels will break off and you’ll be back to the store in 5 years for a new grill.

I also helped sell the BBQ grills. We sold a few with side burners, but we never pushed them. I recall many conversations with customers who had paid more for a side burner in the past and never used it, despite their best intentions. Chances are that you will use the side burner once or twice, so don’t spend the money unless you are absolutely sure you’re going to use it