Our Vegetarian Deep Dish Pizza brings the veggies and cheese to a soft-crusted, Chicago-style deep dish pizza. Meat lovers can’t deny this is an epic pizza! 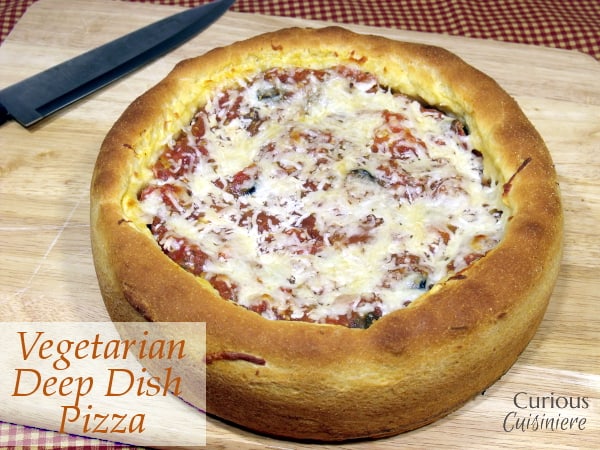 Break out that spring-form pan.

And shush that nagging voice in the back of your head that spring-forms are only for cheesecake.

You don’t need a deep dish pizza pan. But this fortress of a pizza does need some serious support!

We’re bringing you a vegetarian meal for your Lenten Friday a few days early this week for good reason. Friday is Pi Day. You know, 3-14, the day that celebrates that never-ending number. So, of course, we have a spring-inspired (and quite tasty) sweet pie for you on Friday to celebrate. But, we thought we’d get in the spirit early with a different kind of pie.

And, as scrumptious as today’s pie is, it is completely void of meat! So, you can enjoy it as your Lenten Pi Day meal. 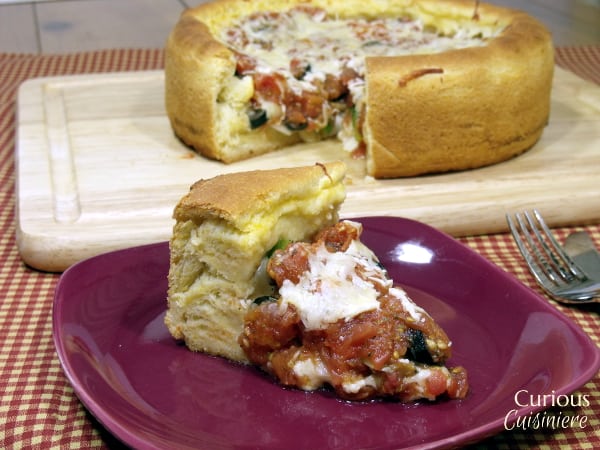 Before we go into what makes Deep Dish Pizza a category of its own, we wanted to address a question that we get a lot about the Lenten practice of abstaining from meat on Fridays.

There are many speculations as to why it has been an age-old Catholic practice to abstain from meat on Fridays. Some claim it was for support of the fishing industry. Some say it was simply safer to eat fish than meat. Some look at the fact that fish was considered a poor-man’s meal, so it speaks to voluntary poverty.

With all the speculation, we really may never know why the practice started, but what we do know, is that it has been around for hundreds of years. And really, whatever the reason, the purpose is something much bigger than that.

And unless you already forgo meat as a part of your diet, it can feel like a sacrifice to pick a salad for lunch over that burger.

And, that’s the point.

How often do we tell ourselves no?

It’s so easy to indulge in everything we may want or think we need, and in doing so, it becomes easier and easier to get wrapped up in our own little world, forgetting about those around us. Giving up meat on Fridays during Lent is a very small way in which we get to die to our own desires and enjoy a glimpse of a bigger perspective.

I know that when I am able, even for a moment, to take the focus off of myself, I realize how much I am missing that is going on around me every day.

What would you see, if you took a small instance to turn your focus outside of your own desires? 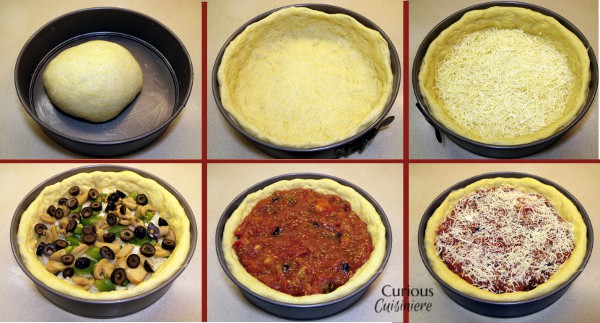 Deep dish pizza was invented in the 1940s by the restaurant Pizzeria Uno in Chicago, Illinois. That’s why you’ll also hear it called Chicago-style. (I, for one, had never heard of such a thing as deep dish pizza, much less seen this topping-laden tower, until I moved to Milwaukee and had a room-mate who needed her pizza fixes to remind her of home.)

The pizza is characterized by nearly 3 inches of crust around the edge, which is necessary to contain all the cheese, toppings, and chunky tomato sauce that fills the interior.

The thick layer of toppings and thicker crust require a longer baking time, which could burn the cheese on top of the pizza. That is why the ingredients are piled in reverse, with the cheese coming first and the sauce coming last.

Since we don’t have a deep dish pizza pan (apparently there is such a thing), we simply broke out the spring form pan. And, it worked wonderfully. Just be sure to oil the inside of the pan well, so that the cooked pizza releases easily.

As you can probably tell this pizza is not walking food. You’ll need a fork and knife to dig into the saucy deliciousness. (And in my case, a large stack of napkins.)

But, trust me, it’s well worth it.

How to prepare a turkey to roast

Is a standing rib roast the same as prime rib

How long to roast red potatoes at 400

How long should i grill steak